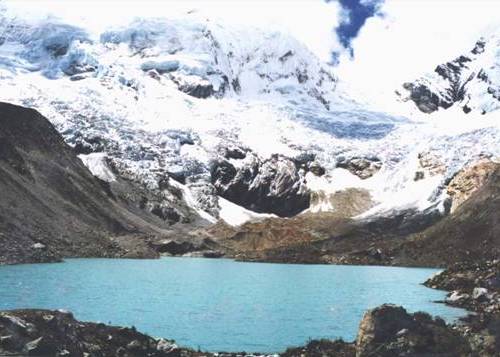 “As we know, there’s an accelerated glacial retreat in the Andes, and I’m very happy that I’ve been able to show people what’s going on with glacial retreat,” Andean farmer and mountain guide Saúl Luciano Lliuya, the plaintiff in the case, told an online media briefing after the site visit.

His lawsuit,Luciano Lliuya v. RWE AG, was initially rejected in 2015. But then it was allowed to proceed to the “evidentiary phase” in 2017 after an appeal, which was itself a moment of legal history. For the first time, writes The Climate Case, a court found that a private company with very large emissions can in principle be held responsible for protecting those affected from climate risks it has provoked—even those in the “global neighbourhood.”

“The case is an important one, and the decision, in principle, that RWE could be responsible for impacts of climate change in Peru is already groundbreaking without a substantive outcome yet,” Lewis & Clark Law School assistant professor Lisa Benjamin told The Energy Mix.

The case is unique because it is “so transnational in nature,” Benjamin added. The outcome might not “map neatly” into other jurisdictions like Canada and the United Kingdom due to differences in legal systems, but some common principles of tort law and causation can still apply, and those principles “are being stretched and tested by the multidimensional and complex nature of climate change.”

Part of a “second wave” of climate litigation against non-state actors, like the Philippines Human Rights Commission report that linked carbon majors’ climate action obstructions to human rights violations, Luciano Lliuya is part of a wave of lawsuits aimed at holding companies accountable.

With legal support from Germanwatch, Lliuya asserts that global warming has accelerated glacial melting into Lake Palcacocha, located above his home in Huaraz, and increased the threat of a flood wave from the lake. Lliuya is asking that RWE fund climate protection measures for the town and its 120,000 inhabitants in proportion to the company’s global emissions. Based on a 2014 study that found RWE accountable for 0.47% of historic global emissions, the lawsuit asks that the company pay 0.47% of the costs, or roughly US$3.5 million.

“This case is about asking RWE to bear part of the costs of risk reduction measures at the Laguna Palcacocha,” said Dr. Roda Verheyen, the plaintiff’s lawyer, who was in Huaraz for the site visit. She said this is the only case where a person “actually takes the law into his own hands and states that there is climate damage or risk” and asks for compensation.

Lliuya’s claim is supported by a peer-reviewed study that measured the glacier’s retreat and its impact on Lake Palcacocha, which the researchers say is “entirely attributable” to rising temperatures. “The resulting change in the geometry of the lake and valley has substantially increased the outburst flood hazard,” the study adds.

German procedural rules require court-appointed experts to make their own inquiries into an issue, so the site visit was an important step in the case, though it was delayed two years by the COVID-19 pandemic. The nine-member delegation was mandated to address only the first of two evidence questions, so they focused on whether the glacial melting poses a “real and imminent risk” to Lliuya’s house. Whether the risk is caused by climate change is part of the second question, Verheyen explained.

“Attribution is not actually at the forefront of the site visit,” she said. The trip included data collection from sources like soil samples, measurements of a 1970s-era siphoning system, and discussions with Peruvian authorities, to establish the danger posed by glacial melting.

“Nobody who was there actually could question the fact that there is risk,” Verheyen said. “Whether or not it is legally imminent enough and concrete enough is an issue for the court.”

A final conclusion is still a long way off. The experts will review their data and write a report, expected in the fall. A hearing on the report’s outcomes will not take place until winter or sometime next year. If the court does determine that there is an imminent risk based on the report, the case will then turn to the next question of whether that risk can be attributed to climate change. That phase will require a repeat of the investigative process (but likely without another site visit) and another oral hearing, explained Verheyen.