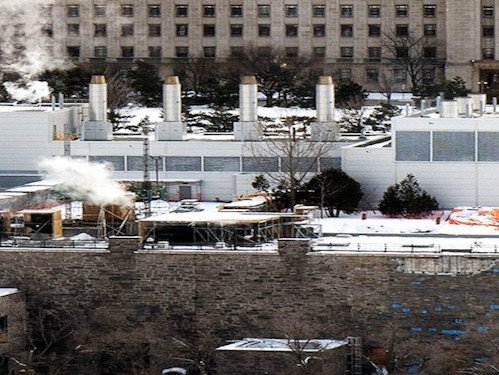 The Ontario Energy Board sent minor shock waves through the province’s energy regulatory and municipal energy communities earlier this month with its refusal to approve the final phases of a $123.7-million pipeline replacement project in Ottawa proposed by Enbridge Gas.

Several observers said this was the first time the OEB had refused a “leave to construct” application from a gas utility, laying bare an operating model in which the companies’ revenue is based primarily on the kilometres of pipe they can install, rather than the volume of gas their customers actually need.

The OEB’s written order cites plans to reduce fossil gas demand across the City of Ottawa as one of the factors in the decision, along with Enbridge’s failure to show that a pipeline replacement was necessary or the most affordable option available. Major drivers of that reduction include Ottawa’s community energy plan, Energy Evolution, as well as the federal government’s effort to convert its Cliff Street heating and cooling plant from steam to hot water—changes that Enbridge did not factor into its gas demand forecasts.

But “having the city give evidence that everybody is cutting back on their carbon in Ottawa, the OEB was hard pressed,” he added. “If Enbridge had had any other proof that the existing pipeline was failing, they might have won. But when the city goes in and says it won’t be using as much gas anymore, you can’t just ignore it.”

The implications of the decision could reverberate far beyond Ottawa, said Richard Carlson, director of energy policy at the Pollution Probe Foundation, and Gabriela Kalapos, executive director of the Clean Air Partnership.

“It’s been very uncommon for municipalities to participate as intervenors in the regulatory process,” Carlson said. But “their input can be important in the board’s decision. And for the utilities, there is the clear need to show that they’re taking community energy plans into consideration. If they go against those plans, they have to explain why. And they really need to undergo more community consultation on their future plans.”

Until recently, “we would not have been having this conversation, because energy planning would have proceeded as it always has, just bring in the wires and bring in the pipelines,” Kalapos said. But now, “thankfully, cities have community energy plans that are bringing them into this realm. Having that integration across stakeholders is absolutely critical for Ontario to really transition to the energy system of the future, as opposed to doubling down on the energy system of the past.”

A Weak Case for a Big Project

The story began in March, 2021, when Enbridge filed for permission to complete the last two phases of a four-part replacement plan for its St. Laurent Ottawa North Pipeline, a 19.8-kilometre conduit through the city’s east end. The utility maintained the replacement was needed due to “the ongoing integrity decline of vintage steel distribution mains”, the OEB wrote, raising concerns about its ability to deliver safe, reliable gas service to 165,000 customers in Ottawa and nearby Gatineau, Quebec.

The company “noted that the area served by the existing St. Laurent system is a single-source natural gas network serving thousands of customers, and that the consequences of a failure, depending on the severity of the damage or defect, could be severe,” the board stated. “In the extreme, Enbridge Gas asserted that it could be faced with the need to shut down the pipeline entirely, causing a loss of service for thousands of customers.”

But community intervenors including Pollution Probe, the School Energy Coalition, Environmental Defence Canada, the Federation of Rental Housing Providers of Ontario, and the Industrial Gas Users Association took issue with different aspects of Enbridge’s rationale. They said the application contained contradictory evidence on the condition of the existing pipeline, supplied insufficient technical information to justify the replacement, and failed to make the case for installing new pipe rather than repairing or retrofitting the existing line.

“The OEB finds that Enbridge Gas has not demonstrated that the risk associated with the subject pipelines warrants complete replacement at this time,” the commissioners wrote. They found that the company had only demonstrated a “very low likelihood” of serious issues with the existing pipe, based a statistical survey of pipelines across its service territory rather than an assessment of the infrastructure at St. Laurent, and changed up its evidence in the course of the regulatory hearing as questions about the application began to accumulate.

One of the key issues with the St. Laurent pipeline application was Enbridge’s failure to date to engage in integrated resource planning (IRP), working with the city and other stakeholders to find the most effective, lowest-carbon ways of meeting local demand for energy services. The OEB mandated local IRPs in a July 22, 2021 decision, with an exception for gas system needs that had to be resolved within three years. Enbridge tried and failed to convince the commissioners that the St. Laurent replacement was too urgent to wait.

The company also refused to consider downsizing the pipeline, citing a consultant’s conclusion that the city couldn’t reduce gas demand enough to justify a smaller pipe.

“Approving another natural gas pipeline to supply the City of Ottawa for the next 40 to 100 years is in direct conflict with Energy Evolution,” the city told the OEB, citing the community energy plan adopted in October, 2020.

“City staff indicated that its preference would be for an integrated energy planning approach that would require the main energy suppliers (gas, electricity, and district energy) to work together to build an energy system which meets the Energy Evolution climate goals while ensuring affordability and energy security,” the OEB wrote.

Without that level of planning, Environmental Defence warned that a new pipeline could become a “stranded under-utilized asset,” with local ratepayers picking up the tab. Pollution Probe pointed to the same risk and recommended “the more prudent and economic alternative of monitoring and maintaining the existing pipeline,” noting that Enbridge had failed to properly assess the risk that future demand for the pipeline might evaporate.

With the cost of the pipeline replacement coming in considerably higher than the alternatives, the commissioners concluded that Enbridge “had not provided sufficient evidence” that it was pitching the best available alternative. It suggested that Enbridge “work collaboratively with the City of Ottawa and other stakeholders to proactively plan a course of action if and when pipeline replacement is required, including the pursuit of Integrated Resource Planning (IRP) alternatives.” And it encouraged the utility to adopt that same approach for future projects elsewhere in the province.

The Options for Enbridge

Close observers of OEB regulatory proceedings told The Energy Mix that the three-year rule in the board’s July, 2021 IRP ruling was becoming a standard loophole for gas companies intent on getting new pipelines approved and built—until now.

That’s largely because utility decision-makers think they have no choice.

“The only way they can make money is through capital expenditures,” Shepherd explained. “That’s the business model for utilities throughout most of North America. If they can’t put pipe in the ground, which is their big expenditure, they can’t make more money. They can’t grow. Period. They will ultimately they make less money” as the value of their assets gradually depreciates.

“It’s not like it’s their fault,” he continued. “It’s natural to the model.” But the net result is that utilities obstruct change because “it’s the only way they can make money”—or so they think.

Shepherd drew a parallel to tobacco companies that had to decide whether to carry on with a failing product, guessed wrong, and are now in bankruptcy protection. “Anyone who’s in a legacy business has a choice: they can transition out of that business or they can try to hold onto it,” he said. The option for Enbridge is to find a foothold into the electricity sector, “but that means basically giving up on natural gas.”

That shift would mean closer collaboration among cities, utilities, and the real estate sector.

“If we’re not building low-carbon new developments, they’re going to have to be retrofitted 10 or 15 years from now, and it’s going to cost them a hell of a lot more to get the outcomes we need than if it were planned that way in the beginning,” Kalapos said. But “it’s hard for builders to bring in low-carbon options because they aren’t energy developers. They’re real estate developers,” which puts them one step removed from some of the key decisions on how to manage and decarbonize energy demand.

“It really speaks to what you need to do to move forward,” she said. “Because if we don’t break down these silos, we’re just going to do the same old same old energy planning we’ve done in the past, and that’s a disservice to Ontarians.”

For Enbridge, the challenge and the opportunity is to “start advancing on how they provide total energy services,” Carlson agreed. “If we’re going to meet our net-zero targets, we will be using less fossil gas,” so “this is the first act of how we structure our energy and regulatory system when we have to face that challenge.”

“The message being sent by the OEB is that natural gas providers should not assume the situation is ‘business as usual’,” he said in an email. “Things are changing, and they need to see the City and Ottawa Hydro and others as partners in energy that need to collaborate in their capital works and operations planning. Approving Enbridge’s project would [have] signal[led] the antithesis of the City’s Energy Evolution goal of moving away from natural gas.”

Enbridge spokesperson Leanne McNaughton told The Mix the company is “reviewing the decision and working to determine our next steps.” She cited a gradual shift to greener fuels in concert with increased electrification as “the most cost-effective and resilient way for communities like Ottawa to achieve net-zero.”

In a follow-up email, McNaughton maintained that the rejected Phase 3 and 4 pipeline replacements “are the most prudent alternative to address the known integrity concerns within and ongoing degradation of the St. Laurent pipeline system. This is especially true given the magnitude of consequences to customers and the public in the event of system failure.”

But Don Herweyer, the city’s director of economic development and long-range planning, pointed to the $90.7 million Ottawa ratepayers stand to save if Enbridge repairs the pipeline rather than replacing it.

“While the savings are small for individual consumers, it is welcome during the current period of energy inflation,” he said in an email. “More locally, commercial and residential Enbridge customers in the vicinity of the proposed construction will not face the disruption the proposed pipeline replacement would have caused.”

In the immediate aftermath of the OEB decision, there was no indication that Enbridge would initiate an IRP dialogue with the city. But in a May 13 email, Herweyer said initial discussions would begin within weeks.