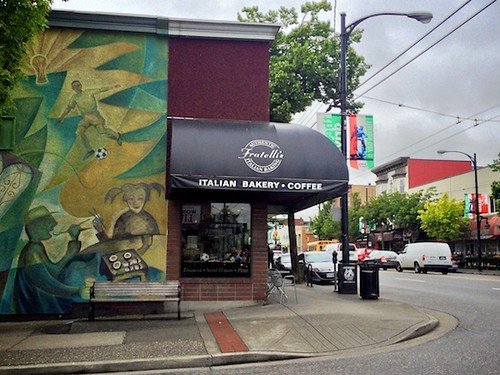 Vancouver’s core-area neighbourhoods are closing in on 15-minute city status, says a new study conducted by Simon Fraser University, largely because a decisive majority of residents can get to their nearest grocery store on foot, and at a relaxed pace.

Nearly 80% of Vancouverites have a food store within easy walking distance, and just about everyone (99%) with access to a bike can regularly pick up groceries without driving, reports CBC News.

“Not everybody has access to a car or has the ability to drive, so it’s really important that people can meet their daily needs by walking,” study co-author and SFU Health Sciences professor Meghan Winters told CBC.

But Winters said the research findings could not be extrapolated city-wide, since her study was limited to the “dense and amenity-rich” core. In addition to grocery stores and other shopping, those amenities include schools, child care and health care centres, recreational facilities, and green spaces.

“If we look across the region,” she said, “there are far fewer areas that would be considered 15-minute cities.”

Areas lacking in amenities are frequently dense with children, the elderly, and the poor, as well as visible minorities of all ages, producing an equity gap that the report authors urged city planners to redress.

Describing the 15-minute city as a concept that embraces “the power of nearness,” former Vancouver chief planner Brent Toderian declared that its opposite—where amenities are clustered far from where people live—has “eroded our quality of life.”

He added that the “power of nearness” is what will build and maintain healthier and happier communities, as well as a healthier planet.

“You shouldn’t have to travel many communities away to get what you need,” Toderian said.