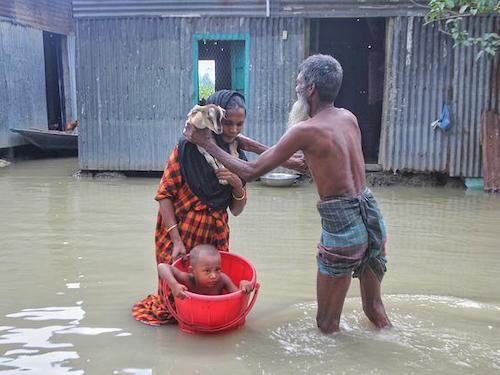 The climate crisis brought death and devastation to India and Bangladesh this spring, with at least 60 people killed so far by flooding, landslides, or lightning strikes, at least another 90 lost to extreme heat, and millions displaced from their homes.

The continuing impacts show how vulnerable the two countries are to climate impacts, due to rising temperatures in the Indian Ocean and the Bay of Bengal, reports the New York Times. The Times cites a January study by the Indian Institute of Tropical Meteorology which drew a clear link between warmer seas and a subcontinent simultaneously afflicted by too little water and too much, combined with extreme heat.

The Sylhet region of Bangladesh is seeing its worst flooding in 20 years. “At least 10 people have been killed in the region, most drowning after their boats capsized while they were trying to move to safer areas,” reports the Times. Similarly hammered by extremely heavy pre-monsoon rains have been India’s remote northeastern states of Assam and Bihar, which have together lost at least 50 people.

The impacts extend far beyond the death toll. Desperate to house the countless numbers who have been displaced, Bangladeshi officials have “closed nearly 600 schools and colleges indefinitely to use them as shelters for those who have nowhere to go,” while at least 3,000 hectares (30 square kilometres) of rice paddy fields have been consumed by the flooding, threatening the livelihoods of thousands of farmers.

And while Bangladesh and northeastern India drowned, India’s northwest endured a lethal heat wave, an extreme weather event made at least 30 times more likely by anthropogenic climate change, according to the World Weather Attribution initiative.

“Responsible for at least 90 deaths across India and Pakistan, as well as wheat crop failures, power outages, and forest fires,” the heat wave was made 1°C hotter by human-driven warming, reports Carbon Brief.

At a media briefing convened to discuss the heat wave, Indian climate scientists warned that any further increases in heat, especially when coupled with humidity, would approach the limits of what humans can survive. They urged policy-makers to consider this reality as they make heat action plans.

IPCC lead author Dr. Chandni Singh, senior researcher at the Indian Institute for Human Settlements, called for “transformational adaptation” that would “involve a complete shift in how we build our cities—more space for nature, more ventilation, revised building codes—how we work—shifting work timings, providing cool shelters for exposed livelihoods—and supporting the most vulnerable who are most at risk.”

Aditi Kapoor, climate resilience advisor at the Red Cross Red Crescent Climate Centre, stressed that the extreme heat in India and Pakistan this spring was felt disproportionately by those least able to seek shelter from it. Hardest hit were people whose work requires them to be outside—“street vendors, construction workers, farm workers, even the traffic police”.

Beyond a certain temperature, however, no amount of adaptation will help. “It is important to recognize that one cannot adapt to extreme heat endlessly,” Singh said, echoing other expert warnings on the lethal conjunction of heat and humidity. “Deep mitigation is the longer-term solution.”