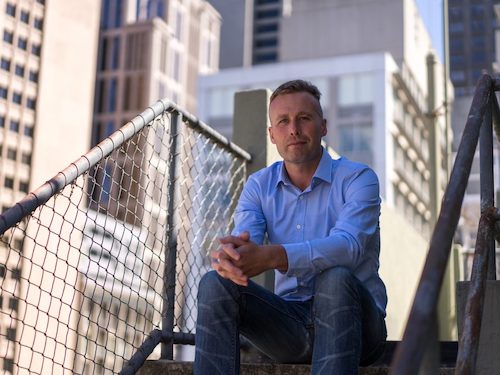 The last decade has seen a major shift in how brazenly financial institutions can cast their lot with carbon-heavy fossil fuel projects, but there’s lots more work ahead to hold them fully accountable, said Julien Vincent, founder of Melbourne-based Market Forces and one of the winners of the 2022 Goldman Environmental Prize.

It wasn’t too long ago, in 2013, that Australia’s biggest insurance company could proudly feature a truck entering a coal mine on the cover of its annual report, Vincent said. A decade later, “that’s the kind of thing we would put online to embarrass a financial institution, And that’s a really apt summation of the transformation.”

But to this day, “companies will get away with whatever companies can get away with,” he told The Energy Mix. The antidote is to reinforce the global trend toward climate action by focusing on what big investors are doing with the money they collect from regular citizens, through tools like Market Forces’ Climate Wreckers Index.

“The thing we’ve done is brought accountability to financial institutions for the impacts of what they’re investing in, because when they invest, they’re doing it with our money,” Vincent said. “They can only do that with the community’s support. Often that support is very tacit without the right information at people’s disposal. But these institutions can’t operate if we don’t want them to.”

Whether the focus is on banks or pension funds, “what we’ve brought to the party of energy and climate activism and advocacy is something that allows people to tap into the sources of power they have at their disposal,” he added. “Just being a noisy, active citizen is bringing finance into the mix.”

In Australia as in Canada, Vincent said campaigners are beginning to tackle the “interlocking relationships” between finance executives and resource companies—like a former Australian energy minister who now works to promote coal mining while sitting on the board of a major liquefied natural gas company.

“How that’s not a conflict of interest is beyond me,” he said. “That revolving door is not an issue that is unique to Canada or Australia or anywhere else. It’s ubiquitous.”

But growing awareness of those connections is raising eyebrows among investors, and before long, it may begin translating into votes against board directors.

Australia and other countries are also setting higher standards for corporate directors to factor climate into their decisions. “The legal bar is lifting to the point where you’re becoming exposed as a director, personally and as a company, if you don’t have the ability to manage and disclose climate-related financial risk,” Vincent said.

But that doesn’t mean corporate practices are shifting as quickly as the climate emergency demands. “That’s why we’re surrounding a lot of these companies with their lenders, their institutional investors, challenging the ability of directors to maintain their standing and hold onto their roles, sometimes even challenging their customer bases, and working with staff.”

He said campaigners in Australia have also been working with relatively new staffers at engineering companies who are not long out of university and “want to work on exciting, forward-looking, nation-building projects, not dirty old, redundant coal mines and feel ashamed about it. When you can give people a sense of agency that often their companies won’t give them, that’s an incredible force for change.”

Speaking 10 days before national elections that upended Australia’s climate-denying Liberal coalition government, Vincent said a change in leadership would bring some shift in climate targets—but the country’s fossil industries would not likely miss a beat. “Part of what they do is to build and maintain political influence and exert political power through donations, which are pretty prevalent here, or the intensity of their lobbying, or through public campaigning and scare tactics,” he explained.

But “what we’ve seen and demonstrated time and time again is that people can change whatever they want to change if they’re able to tap into their own power and agency. Power isn’t all concentrated with governments. Power exists if you open your wallet and see cards with the names of financial institutions on them. Or just by being a noisy, active citizen. We’ve got all the tools we need. We just need personal will, beyond political will, to tap into that power,” and “our job is to make it possible for other people to be powerful.”