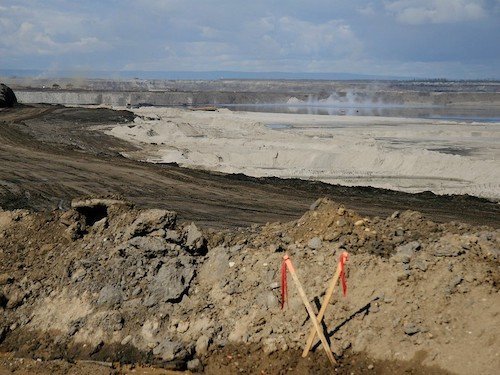 Forty years of largely unregulated growth have left 1.4 trillion litres of toxic tar sands/oil sands tailings sloshing around in “ponds” on the shores of the Athabasca River, devastating ecosystems and First Nations communities with neither plan nor budget for reclamation, says a new report from Environmental Defence.

Using satellite imagery to map the growth of the tailings ponds from 1975 to 2020, the report also draws on the expertise of two Dene people: Jean L’Hommecourt, grandmother and board member of Keepers of the Water, and traditional land use specialist Mike Mercredi.

Environmental Defence writes that the tailings themselves are the toxic byproduct that remains when bitumen is separated from its substrate of clay, sand, and silt using huge volumes of water and chemicals. The waste is then dumped into tailings ponds, on the theory that the solids will eventually settle to the bottom where they can be reclaimed and recycled.

Unfortunately, not all the solids easily settle—Environmental Defence estimates the process can take up to 150 years. And “this extremely slow settlement process is a problem because industry has not shown they can safely store tailings for that long without causing environmental harm.”

The 30 tailings ponds now in operation across nine tar sands/oil sands projects cover 300 square kilometres of what was once northern boreal forest, Environmental Defence notes. If the facilities were lined up end to end, the resulting body of toxic sludge would be more than 94 kilometres long, held behind towering dams whose walls can reach as high as a 30-storey building.

While those walls may keep the tailings from sloshing out of the ponds, they do not prevent seepage: Environmental Defence found that Syncrude’s tailing pond (officially called the Aurora Settling Basin) has been leaking roughly 39.25 million litres per year since it began operating 20 years ago. That’s roughly 785 billion litres of toxic waste fluids, notes the report, with the Muskeg River less than one kilometre away.

Citing research conducted in 2008, the report says conservative estimates then suggested the tailings ponds were leaking more than four billion litres of fluid every year. The ponds have since increased more than 230% in volume and roughly 170% in size, so seepage volumes “could be much higher.”

And tar sands/oil sands tailingsare highly toxic, says the organization, containing known carcinogens like benzene and chromium, known neurotoxins like lead and mercury, and chemicals like naphthenic acids, which are known to be “acutely toxic to aquatic organisms in low concentrations.”

The report also warns that concentrations of PAHs, a large family of chemicals known to be extremely toxic to fish, average 0.01 milligrams per litre, far in excess of the 0.00001–0.00006 mg maximum recommended by Canada’s surface water quality guidelines as safe for aquatic life.

The tailings facilities also pose a risk to other wildlife, particularly migratory birds, since the residual bitumen often floats on the surface of the ponds. Their oily residue weighs down feathers, leading to direct drowning or rendering a bird unable to fly away and forage for food.

Then there is the air pollution. Dene Elder Jean L’Hommecourt said asthma was once virtually unknown in her community. Now, she told Environmental Defence, it is so present and severe in many Dene children that she dreads the previously welcome summer days that evaporate toxic particulates from the surface of the ponds. The particulates hang suspended for hours in the relatively cool air of night and force residents to keep their doors and window closed even as heat waves grow increasingly common.

The impact of the tailings ponds on the people who live in their toxic shadow doesn’t end with poisonous summer air. Environmental Defence also describes a profound erosion of culture and traditions. “Land-based teaching, hunting and fishing, medicine harvesting, and community gatherings” have all been either thrown into disarray or destroyed outright by the tailings ponds and their associated industrial activities.

Wildlife that can flee, have left, and L’Hommecourt and Mike Mercredi both spoke of having to travel as much as 500 kilometres to hunt and engage in traditional land-based teaching with Dene children and youth. “Fishing in the Athabasca River used to be central to the communities, but net setting does not occur in most places now,” the report says.

As for reclamation—the theoretical raison d’être for the tailings ponds in the first place—Environmental Defence cites the “purposeful ambiguity” that both the Alberta government and tar sands/oil sands operators engage in when it comes to what an ecosystem “reclaimed” from oil production activity might look like.

“What the regulations fail to capture is that the primary purpose of reclamation should be to reduce and eliminate known environmental harms, return ecological function, and support Indigenous traditional practices,” write the report authors. But the deliberate vagueness “skirts around the obvious reality that destruction of the boreal forest, particularly peatlands, is often irreversible.”

One mine closure plan submitted by Canadian Natural Resources Limited for its North Horizon tar sands/oil sands mine “details a final post-reclamation landscape with a 100% loss in bogs, fens, and swamps in the project area,” the report says.

Such reclamation plans for all the tailing ponds now active in northern Alberta will result in a “staggering irreversible loss” of nearly 30,000 hectares (300 square kilometres) of peatland, according to one study.

Efforts to regulate tailings, from their creation to their closure, have been dismal, Environmental Defence says. The study team found that tailings ponds grew 40% from 2010 to 2015, despite new regulatory measures put in place in 2009 which gave operators five years to reduce them.

“As of 2016, only one square kilometre of the oil sands had been certified as fully reclaimed by the regulator—roughly 0.1% of the total disturbance in the oil sands.”

Moreover, the costs of reclamation are being sorely underestimated. Environmental Defence writes that although the Alberta Energy Regulator has publicly pegged the cost of cleanup at $28 billion, an internal memo shows a senior member of the regulator estimating cleanup costs closer to $130 billion. One private presentation by an AER official put the total at $260 billion.

But tar sands/oil sands operators have “put aside only a small fraction” of the publicly disclosed $28 billion, creating the risk that taxpayers will have to pick up the tab, the report authors warn.