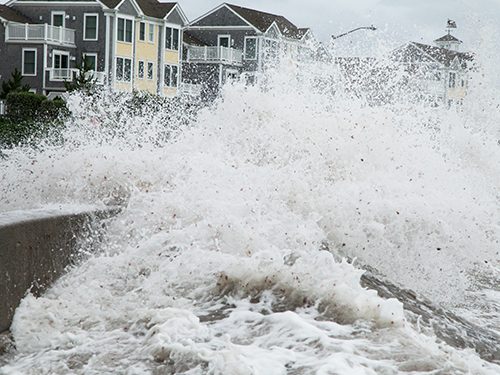 New research has uncovered a surprising link between reduced air pollution in North America and Europe and increased tropical cyclone activity in the North Atlantic basin.

Just published in the journal Science Advances, the study also found that the growth of pollution in Asia has contributed to fewer tropical cyclones in the western North Pacific basin, reports the National Oceanic and Atmospheric Administration (NOAA).

“Air pollution is a big environmental risk to human health and we have made great strides in reducing health risks by reducing particulate air pollution,” said study author Hiroyuki Murakami, a physical scientist at NOAA’s Geophysical Fluid Dynamics Laboratory. “But reducing air pollution does not always decrease the risk of hazards from tropical cyclones.”

Using a state-of-the-art climate model developed by GFDL, Murakami studied tropical cyclone formation between 1980 and 2020. He found that the increasing absence of human-caused air pollution in the Northern Hemisphere (down 50% from 1980) led to surface warming over the tropical Atlantic Ocean, contributing to more frequent tropical cyclones.

“Without significant amounts of particulate pollution to reflect sunlight, the ocean absorbs more heat and warms faster,” NOAA explains. A warming Atlantic Ocean was a key ingredient in a 33% increase in the number of tropical cyclones over the 40-year span, Murakami said.

The decrease in pollution has also produced warming at mid and high latitudes in the Northern Hemisphere, causing jet stream winds to shift poleward from the tropics, writes NOAA. The jet stream shift led to the weakening of westerly winds, which in turn meant less “wind shear,” or variances in wind speeds at different altitudes. “With little wind shear, tropical cyclones are able to develop and grow in strength over the Atlantic Ocean,” the agency says.

Meanwhile in the western North Pacific, the processes at work are the  flip side of what is happening in the Atlantic basin.

Here, a measurable decrease in the incidence of tropical cyclones (known in the region as typhoons) can be linked to a 40-year increase in particulate air pollution as the economies of China and India hit full throttle. Murakami found that “a 40% increase in the concentration of particulate air pollution has been one of several factors that have contributed to a 14% decrease in tropical cyclones.”

“The increased pollution is cooling the land in East Asia, serving to reduce the difference between the temperature of the land and the ocean,” NOAA writes. “Without this contrast in temperature, monsoon winds become weaker. In general, tropical cyclones in Asia are born in the summer in what is called the monsoon trough, which is where westerly Indian monsoon winds converge with trade winds in the western Pacific Ocean. With weaker monsoon winds there are fewer tropical cyclones.”

Murakami also found reduced pollution in the Northern Hemisphere leading to fewer tropical cyclones in the Southern Hemisphere. He put this down to changes in global air circulation patterns. Specifically, the warmer air at mid- and high-latitudes in the Northern Hemisphere is producing “increased upward air flow” north of the Equator, and a corresponding acceleration in downward air flow south of the Equator. That means higher air pressure, which inhibits the formation of low-pressure-loving tropical cyclones.

“The ironic result suggests the necessity of careful policy decision-making in the future that considers the pros and cons of the multiple impacts,” Murakami concluded.

The projection for the next decades is that human-caused particulate air pollution will remain stable in the North Atlantic, while increased greenhouse gases become a more significant influence on tropical cyclones.