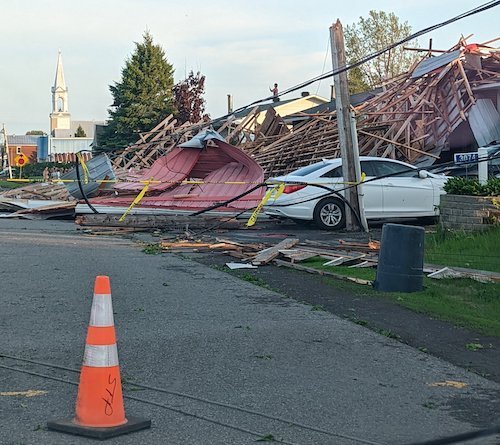 As the death toll following the powerful storm that swept Ontario and Quebec on Saturday reached 10 on Monday, some of the hardest-hit communities were still working to take stock of the damage.

“It’s probably easier for us to count the homes that have no damage than the ones that have damage,” said Clarence-Rockland fire chief Pierre Voisine, while surveying wreckage in nearby Hammond, Ontario, on Monday.

The storm hit the region hard enough to reduce some homes to twisted piles of timber, while downed power lines and broken telephone poles were still blocking streets strewn with debris from uprooted trees and rubble from wrecked buildings, The Canadian Press reports.

The scale of the destruction prompted the community, along with the town of Uxbridge, Ontario, east of Toronto, to declare a state of emergency.

But with a provincial election in full swing, only two of the Ontario party leaders appear to have connected the storms to the wider climate emergency.

“Freak storms like the one we experienced this weekend are becoming all too frequent,” Liberal leader Steven Del Duca tweeted Sunday. “Let’s invest more in communities so we can make Ontario resilient against the impacts of climate change.”

“Thank you to all the first responders across Ontario and to the crews who are continuing to work tirelessly to address the damages in the aftermath of the storm and restore power for Ontario households,” Green leader Mike Schreiner tweeted the same day.

“Yesterday’s devastating storm is another tragic example of the severe impacts of the climate emergency that is here and only getting worse. And as the climate emergency worsens, storms like yesterday’s will become more severe, frequent, deadly and costly,” he added. “We have to act on climate now. There is much needed work to do to make our communities safer, more climate-ready and resilient.”

[If you don’t see your party leader here, and they’ve said or done anything along similar lines, let us know!]

In a ward newsletter Saturday evening, Ottawa city councillor Jeff Leiper compared the damage to the devastating tornadoes that hit Ottawa in 2018. Unlike that emergency, “when a few (difficult) fixes put much of the city back online, many of the current outages are caused by individual poles and wires down,” Leiper explained. “Hydro is going to have to repair those one by one, and there are hundreds. What I do know is that generally Hydro will prioritize the repairs that give them the most bang for their buck—getting a whole neighbourhood on with one repair will be done before a job that may restore just a few people. One thing is certain: it will all get done.”

Hammond resident Mijanou Guibord felt the devastation first-hand when the house she bought brand new in December was destroyed by the high winds, CP writes.

“I was sitting in the living room with my dog—he is a PTSD dog I got to help me after my house before was destroyed by fire—and I saw a red tin roof flying. I grabbed him by the neck and we ran downstairs,” said Guibord on Monday as she looked on at what remained of her home.

“All the windows were smashed in. I yelled out `help me’ from the basement. My neighbour kicked the doors in. The whole house was demolished. My car is still in there.”

Dominic Couture, the neighbour who came to Guibord’s rescue, said that while his house was only somewhat hit with a large dent on the side, the pickup truck he finished paying off four months ago was crushed.

“My truck was parked in the front of the house and I think it flew into the back,” he said. “It’s a Dodge Ram and it is demolished.”

Beef farmer John Lowe spent the day clearing debris on his family farm in Bearbrook, Ontario, after the storm completely destroyed his barn.

Lowe, who was working on the farm when the storm hit, sheltered in an excavator which he later used to dig out trapped cattle from the collapsed building.

“The weather warnings were going off, then the wind really picked up and started blowing dirt around,” Lowe said.

The level of destruction in the area underscored how long some of the recovery efforts will take, as hydro providers warned it could still be days before power is fully restored.

“There’s not a single square inch of our service territory that has not been impacted adversely by this event,” said Hydro Ottawa CEO Bryce Conrad on a media conference call Monday, noting the widespread damage to hydro poles and other infrastructure. “Our own distribution system has just been crushed.”

Conrad said the 187 poles downed during Saturday’s storm, dubbed a derecho by Environment and Climate Change Canada, not only exceeds the number the city traditionally puts down in a year but also tops the number felled during the 1998 ice storm and 2018 tornado.

The utility said Monday it had restored power to more than 70,000 customers, while an estimated 110,000 were still without power. Hydro Ottawa estimated it will take two to four days more to restore most services.

The lack of power prompted the Ottawa-Carleton District School Board to close all schools and child care centres on Tuesday due to ongoing safety concerns posed by the storm.

“Approximately half of our schools are without power at this time and municipal officials are urging residents to stay off city streets as they attempt to stabilize roadways and traffic lights,” the board said in a notice to parents.

The city has opened several shelters and plans to open some libraries Tuesday to provide spaces for those without power, Ottawa Mayor Jim Watson said during the media call.

He said he was also encouraged to see neighbours helping each other through the worst of the disaster.

“Our residents continue to shine the brightest when conditions seem the darkest. Please continue to look out for one another,” Watson said.

The cooperative spirit was on display outside Ottawa as well, with dozens of people out clearing debris with saws, diggers, and trailers.

Elsewhere in the province, Toronto Hydro said it had restored power to more than 96% of customers, with about 4,000 still offline.

Provincial provider Hydro One said more than a thousand power poles in its network had been knocked down by the storm, along with four transmission towers in the Ottawa area. It said about 178,000 customers were still without power Monday afternoon, while service had been restored to more than 400,000 customers.

Across the provincial boundary, Hydro-Québec was reporting about 174,000 customers were still without power, down from a peak of more than 550,000 stretching from Gatineau to Quebec City. Provincial Energy Minister Jonatan Julien held a news conference Monday morning, saying the goal was to re-establish power to 80% of residents before the end of the day.

Some residents, however, expressed frustration as to how the provider communicated the restoration plan.

Marie-Ève Cloutier, a pregnant woman who lives in Quebec City, said she spent 25 hours without electricity and was in a constant state of anxiety wondering when power might come back.

She said Hydro-Québec’s website indicated the restoration in her area was a “work in progress,” leading her to believe issues would be resolved more quickly than they were.

“It’s not their fault that there’s no electricity, or that the work to restore it takes more than 24 hours,” Cloutier said on Monday. “It’s the lack of communication that was bad.”

The storm tore through southern Ontario and Quebec in a matter of hours, breaking hydro poles and toppling towers, uprooting trees, and ripping shingles and siding off houses.

While Environment and Climate Change Canada sent out an alert warning people of the storm, the fast-moving system caught many off-guard.

The total death toll from Saturday’s storm is still unclear, but police in Ontario have reported eight people killed by falling trees in locations across the province, and a ninth killed by a falling tree branch during the aftermath on Sunday.

A 10th person died Saturday when the boat she was in capsized on the Ottawa River near Masson-Angers, Quebec.

The latest victim was confirmed Monday by Peterborough Police, who said a 61-year-old Lakefield man died during the storm from a falling tree.

This report by The Canadian Press was first published May 23, 2022.