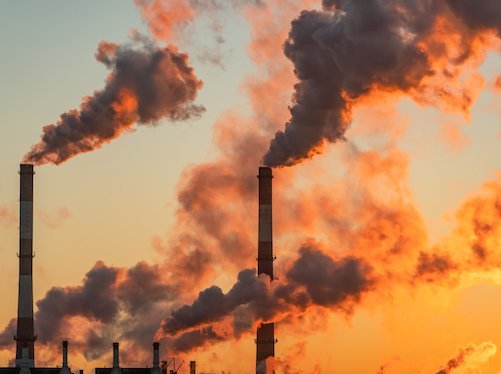 Carbon dioxide and other greenhouse gas emissions caused by human activity trapped 49% more heat in the atmosphere last year than they did in 1990, according to the latest edition of an annual tracking report produced by the U.S. National Oceanic and Atmospheric Administration (NOAA).

NOAA’s Annual Greenhouse Gas Index (AGGI) “tracks increases in the warming influence of human emissions of heat-trapping gases, including carbon dioxide, methane, nitrous oxide, chlorofluorocarbons, and 16 other chemicals,” the agency said in a release Monday. “In 2021, the AGGI reached a value of 1.49, which means that human-emitted greenhouse gases trapped 49% more heat in the atmosphere than in 1990.”

“Our measurements show the primary gases responsible for climate change continue rising rapidly, even as the damage caused by climate change becomes more and more clear,” said Ariel Stein, acting director of NOAA’s Global Monitoring Laboratory (GML). “The scientific conclusion that humans are responsible for their increase is irrefutable.”

NOAA explains that carbon dioxide is “by far the most abundant” greenhouse gas and the single biggest contributor to climate change, with human activity producing a record 36.3 billion tonnes in 2021. Atmospheric CO2 levels hit 414.7 parts per million last year, an increase of 61 ppm since 1990, accounting for 80% of the increased heat measured by the NOAA index.

“CO2 is the main player because it stays in the atmosphere and oceans for thousands of years and it is by far the largest contributor to global warming,” said GML Senior Scientist Pieter Tans. “Eliminating CO2 pollution has to be front and centre in any efforts to deal with climate change.”

But even if CO2 is centre stage, it isn’t the only star of the show.

“One of the most important scientific questions for climate scientists is what’s been driving the sharp, sustained increase of the second-most important greenhouse gas—methane—since 2006,” NOAA writes, with record growth last year of 16.9 parts per billion contributing to a 162% increase from pre-industrial levels.

“Scientists estimate the amount of methane emitted in 2021 was 15% greater than the 1984-2006 period,” the agency reports. “Causes for the dramatic post-2007 increase are not fully understood, but NOAA scientists have concluded that changes in isotopic composition of atmospheric methane over time point to microbial sources, likely from wetlands, agriculture, and landfills, as the dominant driver. Fossil fuel emissions, they suggest, have made a smaller contribution.”

Those results mean that “we should absolutely target man-made methane emissions—especially those from fossil fuel—because it is technologically feasible to control them,” said Xin Lan, a GML scientist affiliated with the Cooperative Institute for Research in Environmental Sciences at the University of Colorado Boulder.

“If wetlands are giving off more methane because of warming and changes in global precipitation caused by rising CO2 levels, that’s something we can’t control directly. And that would be very concerning.”

NOAA points to rapidly rising nitrous oxide emissions in agriculture as the third-largest emissions source, with the three top greenhouse gases accounting for 96% of the excess heat trapped in the atmosphere since 1750. The release suggests it will be difficult to cut back emissions associated with food production, though regenerative agriculture practitioners have been working on solutions.