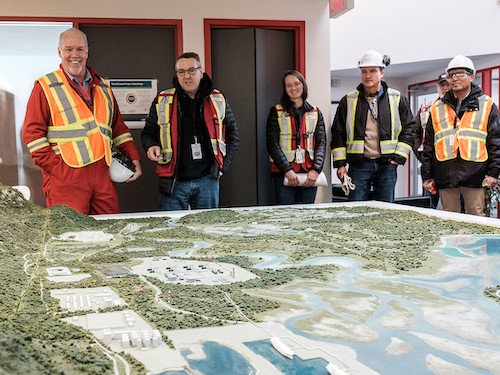 British Columbia is changing its decades-old royalty system, the fees it charges companies to extract publicly owned oil and gas, in an effort to align with provincial climate goals, but still maintaining subsidy support for fracking wells.

The province will eliminate the deep well royalty program, which is the largest oil and gas subsidy, he said.

The minimum royalty rate for oil and gas firms will move up from 3% to 5%, Horgan added. The system applies to all new wells, and will be phased in over two years for those currently operating.

B.C. is blessed with an abundance of natural resources, Horgan said.

“But those resources, (we) have to be reminded every now and again, belong to all of us. And for too long, the system of royalties for oil and gas has set us up to a situation whereby rather than British Columbians benefiting completely from these resources, we’ve seen extremely large profits for oil and gas companies, while British Columbians have had to pay more for their heating costs as a result.”

The government said the elimination of the deep well program means a loss of credits worth between C$440,000 and $2.81 million for companies, depending on the depth of the wells. The change is expected to bring in $200 million more in revenue annually for the government, CP writes.

Bruce Ralston, the minister of energy, mines and low-carbon innovation, said the deep well royalty program was created in 2003 with the intention to offset higher drilling and completion costs for wells considered particularly deep. But since it was set up, a “patchwork of royalty deductions were introduced to reduce royalties,” including those for deep wells.

“Market conditions and technological advancements have changed natural resource development significantly since then,” he said.

The province undertook a review of its royalty program last year, which showed that about 77% of B.C. residents were in favour of revamping the system, said a January news release from Ralston’s department.

Ralston said the new, simplified system will ensure the public return of half the profits over the life of any oil and natural gas well.

“It adds not only to the administrative costs for government, but it adds to the business cost of the companies that are trying to navigate through and calculate how they are going to pay their royalties. So, by eliminating the royalties programs we will introduce a measure of simplicity and clarity.”

A Shell Canada Ltd. spokesperson said in a statement the company is reviewing the details of the announcement and looks forward to “continuing to work constructively with the government to ensure the competitive and responsible development of resources in British Columbia.”

Petronas Canada, Tourmaline Oil Corporation, and Ovintiv Inc. did not immediately return a request for comment on how the changes will affect their operations in B.C.

Oil and gas extraction creates about 20% of the province’s carbon pollution, he said in a statement.

“But this latest subsidy offers a money-back guarantee for the most polluting activity in the province.”

Stand.earth said the new system will “still include the creation of new fossil fuel subsidies that will continue to use public funds to encourage new fracking wells,” CBC reports.

But even so, “today’s announcement is a clear acknowledgement by Premier Horgan that fracking companies in this province have been getting a free ride at the expense of taxpayers and the environment,” said Sven Biggs, Stand’s Canadian oil and gas program director. “This is a step toward fixing that imbalance.”

The main body of this report was first published by The Canadian Press on May 19, 2022.