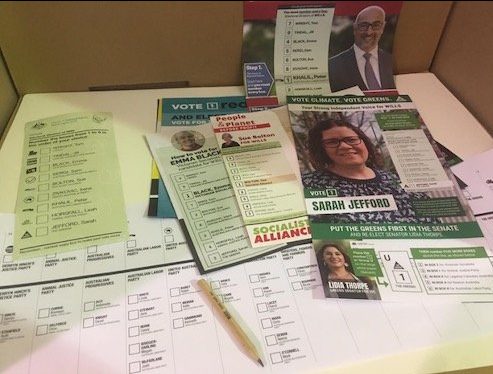 The Labor Party’s Anthony Albanese has been sworn in as the next Prime Minister of Australia, replacing conservative and renowned climate denier Scott Morrison.

The independent Climate Change Authority recommended in 2014 a 40-60 per cent emissions reduction target by 2030 and were ignored by the conservative Abbott government of the time.

At the federal level, minority governments are a rarity in Australia. The Labor government of Prime Minister Julia Gillard from 2010 to 2013 was the last one. It also was one of the most legislatively successful governments based upon negotiations with the Greens and Independent MPs.

The conservative government of Liberal Prime Minister Tony Abbott that followed in 2013 succeeded in demonizing carbon pricing as a carbon tax and abolished it, but was unable to phase out the two green banks.

This election is strange in that Labor is claiming victory, yet we still don’t know whether they will have a majority in the House of Representatives.

Labor’s national vote is around 32%. The two-party vote has fractured with about a third for Labor, a third for the major conservative parties, and a third for the Greens and Community Independents emphasizing climate action. The result was felt deeply by the Liberal Party, losing some 20 seats.

According to the Australian Broadcasting Corporation, Vote Compass data showed climate change, cost of living, and the economy were the big election issues, with climate action a top-level priority.

Major winners are the Greens and a loose alliance of community candidates known as the Teal independents, who emphasized ambitious climate action, bringing integrity to federal politics, and addressing gender equality issues.

The Greens were the only major party to adopt science-based climate targets of 74% emissions reduction by 2030 and 100% by 2035 and call for the phaseout of coal and gas production.

The Greens are also leading the count in McNamara in Melbourne in a three-way contest with the Liberals and Labor, and they may win the seat of Richmond on the north coast of New South Wales, which suffered major flooding in February and March this year.

The success of the Greens in Brisbane, especially, can be put down to their ambitious science-based climate policy, grassroots face-to-face political campaigning, concern about climate-driven extreme weather events after major floods in south-east Queensland and Brisbane, and the impact of aircraft noise from Brisbane airport’s second runway, which opened in mid-2020.

The ‘Teal Independents’, community-based independents candidates, stood in inner urban and some regional electorates, challenging the Liberal or National Party candidates. They received some funding support from the Climate 200 group to enable them to compete against party campaign budgets.

They were especially successful in the inner urban, high socio-economic electorates which the Liberal Party has long taken for granted. These electorates are fiscally conservative but tend to be socially progressive.

The Liberal Party also had a problem with not pre-selecting women and tackling the gender issues in working in the federal Parliament, and it was no coincidence that most of the community independents were professional women with a diversity of professional and social experience.

The community independent movement had its origins in the regional Victorian electorate of Indi, where a series of grassroot kitchen table discussions and community organizing by The Voices of Indi led to the selection of Cathy McGowan to replace the sitting Liberal MP in 2013. After McGowan retired from Parliament in 2019, her community selected Helen Haines to succeed her, with a narrow margin but more votes in 2022.

The community independents support an emissions reduction of 50 to 60% by 2030. They were assessed by Climate Analytics as being at the low end of a deep decarbonization pathway to achieve a 1.5°C temperature target.

The conservative-leaning Liberal Party didn’t just lose 20 seats. They saw some of their biggest names go down to defeat.

The election result was more dire for the Liberal Party in Sydney.

In 2019, Zali Steggall, a community independent using the community organizing model, stood on policies of climate action and addressing federal integrity by legislating an anti-corruption commission, and successfully defeated former Liberal prime minister Tony Abbott. She increased her vote in 2022, while the Liberal incumbents for other Sydney electorates—Wentworth, Mackellar, and North Sydney—all conceded defeat to community independents.

The Independents are all professional women who regard themselves as centrists, and in the past would have fit within the Liberal Party’s fiscally conservative but socially progressive political mould. The MPs in these seats were seen as the “moderate” wing of the Liberal Party, although they always voted with their more conservative colleagues along party lines, and against more ambitious climate action.

In Perth, community independent Kate Chaney looks set to defeat the Liberal MP in Curtin, an electorate once held by Julie Bishop, the then foreign minister who was Australia’s lead negotiator at the Paris climate conference in 2015. Chaney comes from a family with a strong Liberal Party tradition.

During the campaign, National Party Senator Matt Canavan said the net-zero by 2050 target was dead and argued Australia needed more coal and coal-fired electricity. The Nationals vote went backwards by 7%. The Nationals failed to pick up the coal mining electorate of Hunter in New South Wales from Labor, and went backwards in Queensland’s coal mining regions, although they didn’t lose any MPs.

Labor retained its seats in the strong coal communities of the Hunter Valley. The party also improved its vote in Queensland, although not enough to win any seats. Many people in coal and mining now realize that climate denial is not a viable option. The energy transition is well under way and their future careers depend upon structural transition in these regions. A Labor government is more likely to undertake structural transition programs as part of a just transition.

Although the Labor vote was down nationally, many of the party’s voters in safe Liberal or National Party seats may have decided to vote tactically for the Community Independent, then preference Labor. The intelligence of voters is often underestimated by political parties, much as it is encouraged by the way the country conducts its elections.

Australia has a bicameral parliament, with a lower house, the House of Representatives, and an upper house, the Senate. Australia is one of the few countries to embrace mandatory voting, and elections are supervised by the Australian Electoral Commission. In the lower house, there are 151 single electorates with preferential voting. This means the candidate that is least disliked by the majority in that electorate is elected. Citizen preferences are important and often determine results.

Six senators are elected proportionally from each state, with usually half-senate elections every three years. The Greens are set to make gains in this half-senate election, will likely have 12 senators in the next Parliament, and may hold the balance of power in the upper house.

Labor took to the election a climate policy of 82% renewables and a 43% emissions reduction target by 2030.

There is no Labor policy to phase out the mining of coal or gas for export. In fact, Labor policy supports new coal or gas extraction if it meets environmental approvals and is seen as economic. The Liberal, National, and Labor Parties all accept substantial political donations from the country’s fossil fuel industry.

Australia is a top exporter of coal and liquefied natural gas (LNG). Labor will let market conditions determine the fate of that export industry. There was also no commitment to phase out fossil fuel subsidies that currently run at about A$11 billion per year, nor to sign onto the global pledge to reduce methane emissions 30% by 2030.

Labor has committed to asking to organize the United Nations climate conference in 2024, COP29, in partnership with a Pacific nation. The “bid for the 2024 COP in partnership with the Pacific could shift Australia’s reputation from climate laggard to regional leader,” the Australia Institute states. But “this shift should be accompanied by substantive changes to Australia’s climate policy, including on Australia’s climate aid and rejoining the UN Green Climate Fund. Hosting a COP would also have a number of economic, diplomatic and security co-benefits.”

We should not underestimate the importance of this election for climate action, both for Australia and globally. The Labor government takes office with a significant framework of climate action and energy transition, although it is still less than sufficient to meet the Paris Agreement 1.5°C target and the carbon budget scientists have calculated we have left.

Prime Minister Elect Anthony Albanese was sworn in Monday, then flew out to Japan to meet the leaders of the Quad to discuss regional security issues and inform fellow leaders of Japan, the United States, and India of Australia’s changed positions.