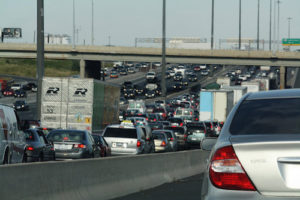 Conservative leader Doug Ford’s promise to build Highway 413, a proposed suburban superhighway ring road to the west and north of Toronto, would lock in a massive increase in climate-changing emissions and other damaging impacts for decades to come, critics say.

A study commissioned by Environmental Defence Canada explains [pdf] that Highway 413 would not simply accommodate existing traffic; it would attract new vehicles to the daily commute. Importantly, it would stimulate development along the corridor—some say that is its real purpose—adding more traffic while consuming agricultural land and natural areas. A widely recognized mechanism called “induced demand” [pdf], the transportation version of “build it and they will come,” explains why expanded road lanes are often filled in as little as five years.

The proposed new highway has become a leading issue in the current Ontario government election. Although it was reviewed and cancelled by the previous Liberal government, the project is enthusiastically supported by Doug Ford’s Progressive Conservatives, who claim it will save drivers a half-hour on the road each way.

The other parties in the race are all opposed. The Liberals say a provincially-appointed expert panel, whose 2017 report is now available through the federal Impact Assessment Agency but no longer on any provincial website, pegged the average time savings at 30 to 60 seconds. Which means Highway 413 “makes no sense whatsoever,” said Liberal leader Stephen Del Duca. It’s “the wrong thing to do,” said NDP leader Andrea Horwath. Green Party Leader Mike Schreiner called the C$6-billion (or more) megaproject “fiscally irresponsible” and a “climate disaster”.

Based on the current mix of vehicles on the road and the carbon pollution they produce, Environmental Defence says Highway 413 will trigger 17.4 million tonnes of carbon dioxide or equivalent emissions through 2050. Annual emissions would be equivalent to the energy used by 81,000 homes.

Assuming, optimistically, that Ontario meets federal targets for electrification, total vehicle emissions by 2050 would be reduced somewhat, but only to 13 million tonnes. And in either scenario, construction would contribute 100,000 tonnes of emissions.

Environmental Defence says transportation accounts for the largest slice of current Ontario emissions, at 35%, and Highway 413 would make it that much more difficult to achieve the province’s target of a 30% emissions reduction from 2005 levels by 2030.

The road will also generate substantial new emissions of air pollutants, with negative air quality and health impacts (including sickness and death) and associated costs for adjacent communities. The study projects “between $1 to $1.4 billion in cumulative damages from air pollution by 2050.”

Highway 413 would create 8.8 million square metres of newly-paved surfaces “running right through the Greenbelt, prime agricultural lands, and the sensitive headwaters of four watersheds from east to west,” the report says. That, in turn, would help to bake automobile-dependent sprawl into the landscape, including world-class commute times, expensive infrastructure, inefficient transit, and a never-ending vicious circle of congestion and multi-billion-dollar highway expansion.

Instead of a new highway, which has already been deemed unnecessary and damaging, Environmental Defence supports a $6-billion investment in new regional transit. It also echoes the 2017 expert panel’s call for incentives to shift truck traffic to the underutilized Highway 407 toll road.