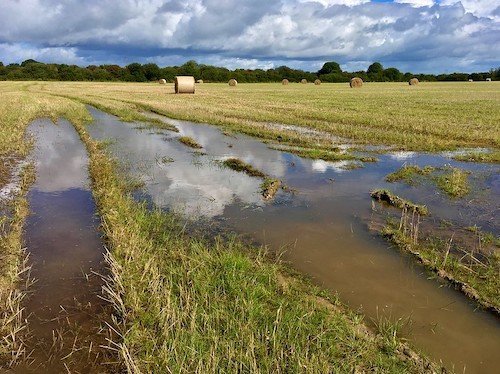 “Nobody wants to say, ‘I have a problem,’ but… we really need help,” Abbotsford, British Columbia, farmer Avtar Dhillon told CBC News. He said he knows many farmers who are struggling with their mental health.

Much of Abbotsford’s farmland was inundated by floods last November, shortly after Dhillon had invested hundreds of thousands of dollars in planting what would have been B.C.’s first crop of saffron. He ended up losing it all, along with 90% of his blueberry crop.

Farmers are used to having to adapt to the weather and deal with unpredictability. But the extreme weather events of the past few years are pushing their resilience as wildfires, floods, and drought destroy equipment and infrastructure and threaten crops and livestock.

“I just really started to burn out pretty hard,” said Julia Smith, a farmer and rancher based in B.C.’s Nicola Valley. “You feel guilty because you didn’t lose as much as some people, but you just want to crawl back into bed and pull the covers over your head. But you can’t, because there’s so many terrible things going on.”

The need to adapt financially adds an extra element of stress when striving to recover from climate damages, writes CBC. Though the federal and provincial governments have programs to aid farmers, navigating the paperwork can cause additional anxiety, and farmers may not have the capacity to turn to support and counselling programs.

“It’s the bottom of the list when you’re dealing with literally life-and-death situations,” said Nicole Kooyman, who runs a poultry farm with her husband in the Fraser Valley. “You can’t stop and check in with yourself. What if you’re not OK? What if you fall apart?… You can’t really look it in the eye, because it might overwhelm you.”

The uncertainty of the climate crisis and the COVID-19 pandemic have increased the stress borne by farmers who already experience higher stress levels than the average population.

Briana Hagen, a researcher who studies farmers’ mental health at the University of Guelph, said farmers she’s spoken to cited the impacts of climate change as a major cause of anxiety and depression. She’s working on synthesizing those conversations into a more in-depth analysis on the topic, CBC writes.

Hagen had previously collaborated with a colleague, Andria Jones-Bitton, to create a mental health literacy program for farmers called In The Know, and to develop an emergency response model for farmers’ mental health during agricultural crises.

“If you don’t have the farming context down, you’re not going to be able to help effectively,” Hagen told CBC.

Deborah Vanberkel, a psychotherapist whose family runs a dairy farm in Odessa, Ontario, similarly founded the Farmer Wellness Program after hearing farmers in her area frequently say they wanted to talk to people who could understand their lifestyle.

“This is why we need to have therapists who have that [farming] background, so that these barriers are removed and they can come in and start talking about the problems that they’re having and be able to have that person relate back to them, without having to explain all the details or nitty-gritty about farming itself.”

Similar programs have been launched in Prince Edward Island—which inspired Vanberkel’s program—and Manitoba. But Vanberkel says more of them are needed “so that all farmers can access services that are tailored for themselves and their families.”