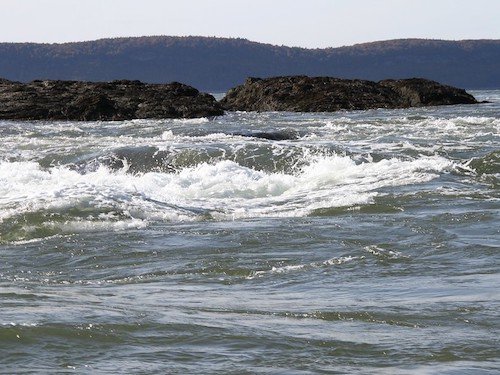 A floating tidal energy project in the Bay of Fundy has been successfully connected to Nova Scotia’s grid, an undertaking that marks a milestone for Canada’s marine energy ambitions, say proponents, as the bay’s tidal resources could be harnessed for thousands of megawatts of clean energy in the future.

Looking like a cross between a catamaran and a rake with wind turbines on its tines, the red-and-white PLAT-I 6.4 in-stream project is the brainchild of Edinburgh-based ocean energy specialist, Sustainable Marine, and the product of almost a decade of painstaking development and testing, reports New Civil Engineer.

PLAT’s successful connection to the grid—a Canadian tidal energy first—is concrete proof that “the Bay of Fundy’s huge tidal energy resource—which contains more than four times the combined flow of every freshwater river in the world—can be effectively harnessed, providing up to 2,500 MW of clean and predictable energy for Canada.”

Sustainable Marine’s success owes in part to its ability to plug into the 30 MW of capacity the Nova Scotia government allocated to the Fundy Ocean Research Centre for Energy (FORCE) via demonstration permits and berths.

As a “pathway to reduce costs en route to commercial projects,” the province has also put in place a regulatory framework to deliver “up to 300 MW of installed capacity.”

All of which “further aligns with the region’s net-zero commitments to accelerate the phaseout of coal-fired electricity by 2030,” adds New Civil Engineer.

Noting that “achieving ‘first power’ to the grid from our new platform in Grand Passage signals a real inflection point for our business,” Sustainable Marine CEO Jason Hayman heralded his company’s collaboration with FORCE as enabling “a staged and step-by-step approach to manage the technical risks and prove the ultra-low environmental impact of our technology.”

Hayman vowed to continue forward with great care, with the project “continuing to actively monitor for any interactions with marine animals.”

In its post on the milestone hookup, Ocean Energy Europe writes that “the current deployment in Grand Passage will also be used to test a multi-sensor Environmental Monitoring System (EMS) located onboard PLAT-I 6.4, linking underwater cameras, hydrophones, echosounders, and acoustic fish tag receivers.” Noting that this system “provides livestreamed data to record marine life in the vicinity of the platform,” Ocean Energy says the aim of the testing is “to demonstrate that a monitoring system can work in these highly energetic environments when visibility is reduced, such as during hours of darkness, or in turbid waters.”