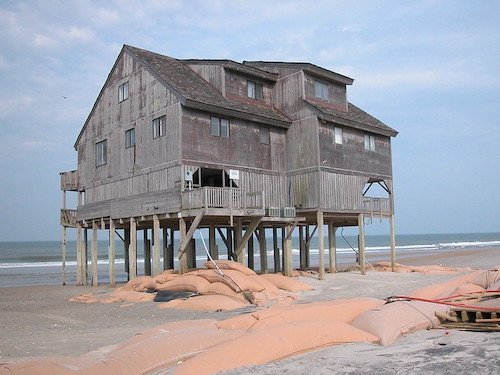 The recent collapse of two oceanfront homes on the North Carolina coast in the immediate wake of a slow-moving storm is being received as yet another reminder that climate change is a real and present danger.

“The slow-moving storm is not particularly intense, but its relentless pounding at the shore—combined with the effects of sea level rise—is causing serious damage in a zone prone to the effects of human-caused climate change,” reports the Washington Post.

The houses collapsed after being battered for days by the coastal storm, which also sent nine tornadoes twisting through Texas and Oklahoma, with one area pounded by nearly 10 inches (25 centimetres) of rain.

Serious flooding was also experienced in parts of Kansas, Missouri, and Arkansas, and rising waters swept away one man was swept away in West Virginia.

The collapse of the beach houses was not caused solely to a single storm, however.

With sea levels around the Outer Banks currently rising at a rate of one inch every five years, coastal erosion surely played a role, William Sweet, sea level expert at the U.S. National Oceanic and Atmospheric Administration, told the Post.

“Higher seas allow waves to attack higher elevations and expose land that is typically not exposed to these types of events,” Sweet explained. “These storms have been chipping away over the last years and decades.”

All signs point to climate change. “It’s not something that’s a decade off. It’s something that is happening [now],” Reide Corbett, a coastal oceanographer at East Carolina University, told the Post.

Which doesn’t mean people should adopt a “sky is falling” attitude in the face of images of homes being swept out to sea, Corbett added.

Planning, not panic, is what is urgently needed, he said, with everyone involved recognizing the need to develop in ways that build greater community resilience.