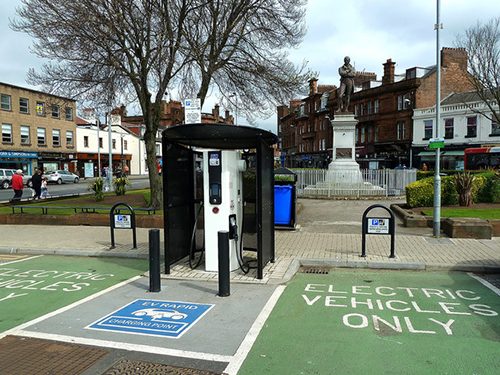 Ontario Conservative leader Doug Ford is promising to install new charging stations for electric vehicles (EVs) if his government is returned to office in provincial elections June 2, but has no plans to reinstate the EV rebates it cancelled when he took office in 2018.

“This announcement represents a marked shift,” writes PVBuzz Media, as the Conservatives began their tenure by cancelling Ontario’s carbon pricing system and the EV rebates it funded. Back then, the PCs’ “ideologically-driven removal of already-installed chargers was even more egregious,” the industry newsletter states.

But ahead of the provincial election, the Ontario government committed C$91 million in March to make more EV chargers available across the province. Transportation Minister Caroline Mulroney said the investment “will help fill gaps in public charging infrastructure and strengthen Ontario’s position as a leader in battery EV production.”

“Providing all Ontarians with convenient, public access to fast and reliable charging will help us move towards our goal of making made-in-Ontario EVs the top choice for both passenger and commercial drivers,” she added.

All 69 of the province’s highway ONRoute stations will receive at least two fast-charging stations, the Ministry of Energy told PVBuzz. Six charging stations have launched recently, “with more rolling out throughout the summer.”

“Our government is getting shovels in the ground to build critical EV charging infrastructure across our province so workers and families can travel with confidence,” said Energy Minister Todd Smith. He called the charging stations a measure that will “support EV adoption and boost our world-leading auto sector as we build the cars of the future here in Ontario.”

But independent analysts say the plan supports supply of EVs but not demand.

“Producing more EVs in Ontario will not directly translate into more EV sales in Ontario unless there’s more support for consumers to go electric,” said Joanna Kyriazis, senior policy advisor at Clean Energy Canada. Daniel Breton, president and CEO of Electric Mobility Canada, added that it is contradictory for Ontario to fail to address consumer incentives.

The Pembina Institute welcomed Ontario’s recent budget measures to invest in the EV supply chain. But these investments “should be paired with incentives targeted at small businesses, transit and school bus fleets, as well as Ontarians with low and moderate incomes and those living in rural areas,” said Ontario Region Director Carolyn Kim.

“The coming energy transition will require that the government continue to attract private capital for climate-friendly infrastructure for the most polluting sectors,” she said. “While EVs, critical minerals, transit, investments in a greenhouse gas (GHG)-free grid, and community resiliency are all vital steps for addressing climate change, ultimately provincial investments must be more clearly aligned with a robust and measurable climate plan.”

Auditor General Bonnie Lysyk warned as far back as 2019 that the Ford government was nowhere near delivering on such a plan. In an analysis for The Energy Mix last month, David Robertson of Seniors for Climate Now wrote that Team Ford is coasting on federal climate announcements while refusing to recognize climate change as a crisis.

The provincial Liberals are campaigning on a rebate promise of $8,000 for EVs under $55,000, while the Green Party would rebate $10,000 and the New Democrats have promised unspecified amounts for non-luxury EVs.

Meanwhile, Ford’s Driving Prosperity plan aims to make the province a leader in EV and battery manufacturing by using minerals found in the less-developed northern region of the province, with the premier emphasizing “everyday affordability” as a core re-election plank. The province will also introduce a fund to support rural municipalities that install EV chargers, to encourage adoption outside urban centres.

The Conservatives plan to support the development of business cases for the electric and low-emission conversion of the Ontario Public Service fleet and GO Transit network. In renewing public vehicle fleets, the PCs say they will create a made-in-Ontario strategy towards procuring EVs and low-carbon equipment.

The plan calls for Ivy, the joint network of Hydro One and Ontario Power Generation, to install pay-per-use charging stations without direct provincial funding. Natural Resources Canada offered a $3.5 million loan, accounting for 30% of the total cost of the project.

Ontario had 1,800 public charging stations with 5,000 charging ports as of March, according to provincial figures, including 32 Level 2 EV chargers that provide free charging at carpool parking lots.

As of February, there were 75,274 EVs registered in Ontario. And by 2030, the province expects one of every three automobiles sold to be electric, with one million EVs on the road.

But EVs comprised only 3% of passenger vehicle sales in Ontario, a proportion that fell to 1% after subsidies were removed. Sales rebounded when a federal rebate was introduced, but the EV adoption rate in Ontario remains lower than in provinces with their own incentives.

Data from Electric Autonomy Canada show that 9.5% of cars sold in British Columbia in 2021 were Battery Electric Vehicles (BEV), followed by Quebec at 5.5% and Ontario at 1.8%.

The transportation sector remains the largest source of GHG emissions across Ontario, representing 36% of all emissions in 2019.

The province has also asked the Ontario Electricity Board to investigate a new ultra-low overnight energy pricing structure that could be in place by next April. The plan “would benefit shift workers and support EV adoption,” Smith said. An incentive for off-peak charging for EVs could also increase grid efficiency and reduce emissions, because electricity in off-peak hours is typically generated from baseload nuclear and hydro sources. Peak demand n Ontario is supplemented by high-emitting natural gas.

“We know that about 80% of electric vehicle drivers plug their cars in at home at night,” said Cara Clairman, president and CEO of the non-profit Plug’n Drive. “An ultra-low, off-peak rate makes so much sense as it does two important things—it makes driving an EV even more affordable and, at the same time, helps the province by making use of the surplus power available off peak.”