3,800 Residents Ordered to Evacuate after Flooding in Hay River, NWT 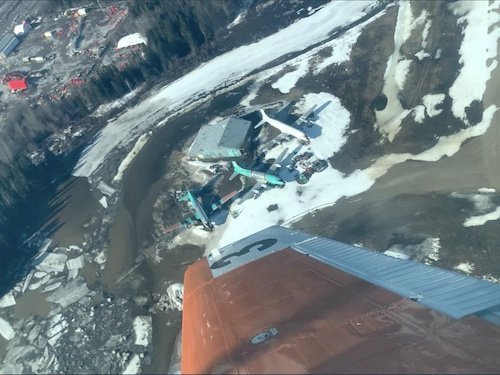 As they struggle with the immediate impacts of the flooding that has inundated HayRiver, Northwest Territories, anxious locals are questioning their municipality’s ability to respond in a climate-changed world where such disasters are growing more common and severe.

One person is missing and many hundreds of evacuees have fled north to Yellowknife, and south into Alberta, as the communities of Hay River and K’atl’odeeche First Nation grapple with unprecedented flooding after Hay River waters surged to record-high levels not seen in the past two decades, reports CBC News.

While K’atl’odeeche First Nation Chief April Martel and others had to suspend their search for their community member after water rose rapidly, Martel said she is hopeful the missing man will be found safe and sound. “He knows how to do survival mode,” she said.

Territorial hydrologist Shawne Kokelj told the Guardian the sudden flash flooding in Hay River owed to a lethal combination of heavy rain mixed with snow arriving just as the ice on the river was breaking up. The town sits at the mouth of the Hay River, where it flows into Great Slave Lake on a small delta containing several river channels. Ice jamming those channels blocked water, and a weekend of rain and snow flooded the system.

With a swiftness that shocked residents, floodwaters surged into Hay River’s downtown core, an incursion particularly striking, notes CBC, as this area was “expressly chosen to avoid flooding” in the wake of the 1963 inundation of the town’s historical centre, Vale Island.

With nearly 3,800 people now under evacuation orders, authorities are urging everyone to register with emergency services so that all remain safe and accounted for.

The NWT government and communities “do not have the capacity to physically find people,” warned Laura Gareau, deputy minister of municipal and community affairs (MACA), speaking at a news conference Thursday. MACA minister Shane Thompson advised evacuees to check in at designated evacuation centres so as to not jeopardize their access to financial support. He said the territory would not cover the costs of hotels for evacuees who fail to contact an evacuation centre.

“We have to be very clear that evacuation centres are where we want people to go,” Thompson emphasized.

Once recovery efforts start, the territory will provide “pathfinders” to help community members navigate the disaster assistance policy and get them the help they need to rebuild, writes CBC.

The latest news is that Hay River’s wastewater system has been “heavily compromised,” with more than 50% of the town now without functioning sewer pipes. Many roads and bridges are either washed out or covered with ice and water, as is the airport. Recovery efforts will have to wait until the dangers of the swollen river still jammed with ice subside.

Four hundred kilometres to the south in Alberta, Justin Gaudet of the Paddle Prairie Métis Settlement told the Guardian that many of the community’s 800 members, especially Elders, are “very tired, very stressed, very anxious.” They’ve had to endure rainfall and snowmelt-fed flooding in nearby rivers—at levels not seen in more than 50 years. They worry about whether their homes will survive their inundation, he said, as many of the structures are old and already at risk for mould.

Back in Hay River, residents are also increasingly concerned about the long term, especially about the priorities being advanced by city officials. At a May 11 public meeting—convened as floodwaters rose—residents pleading for sandbags to protect their homes were told that “there was no plan to run a sandbag program or install short-term infrastructure to protect particular areas.”

Longtime resident Beatrice Lepine challenged city officials: “Are you looking at the future of this community and making plans?” She added that “this event is about climate change—there’s no denying it.”

City officials replied that the C$1.4 million Hay River had received so far from Ottawa’s disaster mitigation and adaptation fund would be dedicated to repairs, but there was no money available for “new projects.” A “phased reopening plan” was expected for Hay River this weekend, CBC reports. Though the worst of the flooding has passed, the town is under a boil water advisory, and as of Saturday only recovery workers have been allowed into the community, with many areas remaining inaccessible.