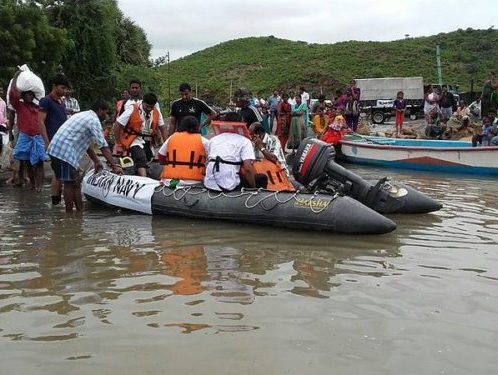 If the world goes on burning fossil fuels at the present rate, then the numbers of people in South Asia at risk from devastating super-cyclones and catastrophic storm-surge flooding could more than double, according to a new study.

And, because of global heating as a consequence of the greenhouse gases already in the atmosphere, a predicted 80% of the world’s croplands could experience increased water scarcity by 2050, according to a second group of researchers.

In the first case, the news means that future super-cyclones, with winds of up to 220 kilometres an hour, could raise storm surge heights of at least one metre and in some cases up to four metres, to sweep across crowded low-lying coasts on the Bay of Bengal. The storms would claim lives, drown livestock, destroy buildings, and poison farmland soils with saltwater, to accelerate levels of disease and leave millions without clean water or food.

And in the second case, as populations increase and food demand rises, farmers in more than four-fifths of all the great croplands worldwide could see lower levels of rainfall, or ever greater pressure on rivers, lakes, and reservoirs. The outcome once again is likely to be a fall in overall harvest and a rise in food prices: once again, the poorest will be hardest hit.

The Bay of Bengal has been the scene of some of the world’s most dreadful disasters. In 1970, Cyclone Bhola flooded what was then East Pakistan and some of the coast of India to claim more than 300,000 lives; some estimates are as high as 500,000.

What is now Bangladesh has developed effective flood warning and protection systems but cyclones remain a periodic hazard. When super-cyclone Amphan hit the Bay of Bengal coast in 2020, more than 2.4 million people were evacuated to 12,000 cyclone shelters. But the devastating wind and floodwaters uprooted trees and swept away 55,000 homes, along with roads, bridges, schools, electricity substations, and embankments: so far the bill is estimated at US$121 billion.

British, French, and Bangladeshi scientists report in the journal Climate Resilience and Sustainability that they looked at what a return of a super-cyclone such as Amphan would bring, in a world in which sea levels continue to rise in response to ocean warming and polar glacial melt, in which populations continue to grow and to concentrate in cities, and in which storms become more extreme.

The good news, they report, is that if nations could stick to the climate goals agreed in Paris in 2015—in which global average temperatures by 2100 are no more than 2°C above the long-term average for most of human history—the numbers at increased risk in Bangladesh would be relatively modest, though those at hazard in India could rise by up to 80%. If, however, the world continues to burn fossil fuels at present rates, the numbers at risk in India, Bangladesh, and Myanmar could double.

“Tropical cyclones with higher intense categories will be more frequent in the future,” said Dann Mitchell of the University of Bristol, who led the research. “This study shows that population exposure in Bangladesh and India will be increased by up to 200% in the future for extreme storm surge flooding—greater than three metres—from intense cyclones under high-emission scenarios. Hence a strong and sustained greenhouse gas reduction is essential to achieve the goals of the Paris Agreement and to reduce losses and damages of highly vulnerable countries like Bangladesh.”

Higher temperatures mean more evaporation. With each 1°C rise in atmospheric temperatures, the air can hold 7% more moisture in the form of water vapour. Hurricane rainfall totals are already significantly higher than they were a century ago, according to a study in Nature Communications last month.

But the impact of higher global temperatures is capricious: for decades, meteorologists have been predicting that while those landscapes at risk of flood will see higher rainfall, the drylands and semi-arid regions are likely to get ever more parched.

New research again tells the same ominous story. In the last century, demand for water has grown at twice the speed of the planet’s population. Meanwhile, global average temperatures have risen by 1°C thanks to profligate fossil fuel use and forest clearance, and ever more soil water has been lost to evaporation. Chinese researchers and colleagues in Europe report in the journal Earth’s Future that they have compiled an index to measure water scarcity from the two sources on which all farmers depend: the rainfall; and the stored rainfall in lakes, rivers, and reservoirs.

Changes in rainfall—for shorthand, “green” water—in the next three decades are now predicted to affect about 16% of the world’s croplands. So-called “blue water” in rivers and lakes will see the impacts: this could affect 60% of all croplands. In all, conditions will worsen for 84% of the world’s wheat, maize, rice, and soya growers.

Once again, such research is intended as a warning. The winds may become more violent, and the soils more parched, but in either case, nations, regions, and local authorities need to prepare for the challenge. The scientists find that northeast China and the Sahel region in Africa could actually see more rainfall. The croplands of the Midwestern United States and northwest India, however, are likely to become more dependent on irrigation.

“As the largest user of both blue and green water resources, agricultural production is faced with unprecedented challenges,” said lead author Xingcai Liu of the Chinese Academy of Sciences. “This index enables an assessment of agricultural water scarcity in both rainfed and irrigated croplands in a consistent manner.”