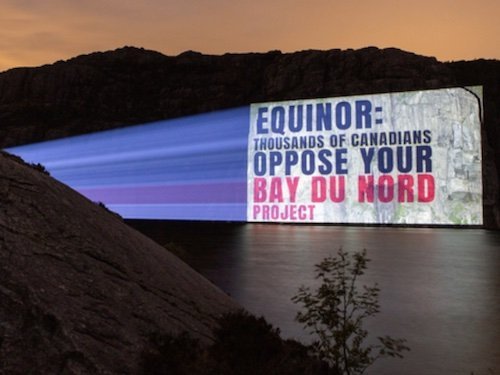 Ecojustice filed May 6 against Environment and Climate Change Canada, the Impact Assessment Agency of Canada (IAAC), and Equinor on behalf of the Sierra Club Canada Foundation (SCCF) and Équiterre, pitting the Montreal-based environment group against its co-founder, Environment and Climate Minister Steven Guilbeault. Guilbeault approved the C$9.4-billion project just two days after the latest warning from the Intergovernmental Panel on Climate Change that humanity is less than 10 years away from exceeding a carbon budget that would deliver just 50-50 odds of holding global warming to 1.5°C.

The IPCC warned that “continued investments in unabated high-emitting infrastructure” would be a barrier to faster, deeper emission cuts, increasing the risk of missing carbon reduction targets that would otherwise by attainable.

Guilbeault’s order approving the project set 137 conditions, including a requirement for net-zero operations by 2050.

However, “industry and government rhetoric around ‘clean oil’ blatantly ignores the fact that the process of extracting oil only accounts for 10% of the emissions from an oil project, with the other 90% coming when the oil is burned,” Ecojustice says in a release. “Recent estimates suggest that over its lifetime, Bay du Nord is projected to produce between 300 million to one billion barrels of oil, which could in turn generate about 400 million tonnes of carbon,” the same emissions that would come from seven to 10 million internal combustion cars per year.

“The minister had a legal obligation to evaluate the downstream greenhouse gas emissions that the project will generate when he conducted the environmental assessment,” Ecojustice lawyer Ian Miron told CBC. “And he failed to do that.”

Miron said the lawsuit also aims to address the risks to biodiversity if the project increases shipping traffic off the Newfoundland coast.

“The government has acknowledged that our window for mitigating the worst impacts of climate change is rapidly closing, and meeting critical long-term objectives requires immediate action,” Ecojustice lawyer James Gunvaldsen Klaassen said in the release. “Bay du Nord will lock the province and Canada into further dependence on fossil fuels at a time when the science demands we transition away from fossil fuels towards cleaner, sustainable energy sources.”

“Just days before Bay du Nord was approved, the UN Secretary General said investing in new oil projects was ‘moral and economic madness’—so we really had no choice but to challenge this approval,” said SCCF National Program Director Gretchen Fitzgerald. “Canada needs to stop breaking its climate promises and protect communities from the impacts of runaway climate change such as coastal flooding, unprecedented storms, loss of ice cover needed for traditional hunting and fishing, and disrupted supply chains.”

“Greenlighting Bay du Nord will delay the transition and lock the communities of Newfoundland and Labrador into a fossil fuel-based economic growth,” said Équiterre Executive Director Colleen Thorpe. “This project approval disregards the many warnings scientists have been giving and it is not only inconsistent with our domestic and international obligations but also immoral towards present and future generations.”

Earlier this week, protesters projected anti-Bay du Nord images onto the building where Equinor was holding its annual meeting, as well as other landmarks in Stavenger, Norway, while Canadian groups placed a full-page ad in the local daily newspaper, Stavanger Aftenblad, Ecojustice writes.

The 17 protesters outside Equinor headquarters in St. John’s wanted all levels of government held accountable for the shift off oil and gas, CBC says.

“Analyze the moral and economic madness, and reject moving ahead with Bay du Nord,” said Yvonne Earle of the Avalon chapter of the Council of Canadians. “And plan for a just transition, and I mean a just transition, for all workers from a fossil fuel economy.”

Equinor told CBC it appreciates differing views on the project. “Our focus is on the collaborative effort with partners and local authorities to mature the project towards an investment decision,” the company said in a statement. “We strongly believe that this can be an important project with high value creation, a low carbon footprint, and strong economic value for the region”