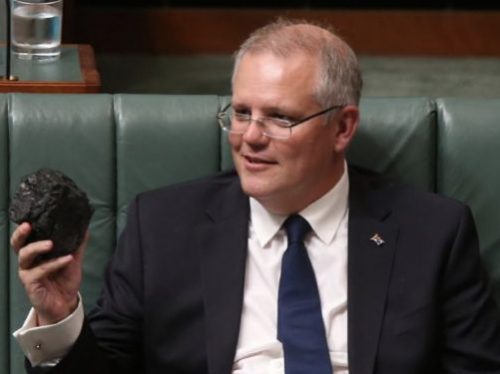 Campaigners in Australia’s federal election are caught in a balancing act between appeasing the majority of citizens who want the government to prioritize climate goals—and seducing voters in a handful of constituencies where a major source of livelihood is the world’s dirtiest fuel.

The May 21 elections have put the coal mining community of Hunter in the spotlight, reports BNN Bloomberg, describing the town as an “electorate the size of Jamaica” that was ravaged by bushfires two years ago, but remains dependent on fossil fuel sales.

Hunter “is the nexus of the country’s climate dilemma, and helps explain the political paralysis that’s left the nation largely silent in efforts to craft global policy to accelerate action on emissions,” the news story states.

It could be a vital electorate for Prime Minister Scott Morrison’s coalition government—currently holding the majority by a slim margin of one parliamentary seat. With almost one in 10 workers in Hunter directly employed by the coal industry, its blue collar legacy may have made it a safe bet for Labor, but many traditional Labor supporters have been “spooked” by the party’s promises to accelerate the fight against climate change, writes BNN. Voters in Hunter may now choose the coal-friendly coalition headed by Morrison, who “once famously brandished a lump of coal in parliament in support of the fossil fuel sector.”

With Labor ahead in the polls, a shift in the coal miners’ vote could be critical for Morrison.

But the climate demands of the rest of Australia have his coalition walking a fine line. In one survey, 55% of Australians said the government’s main priority for energy policy should be “reducing carbon emissions.” To gain their vote, “Morrison and opposition leader Anthony Albanese have been burnishing their climate credentials,” writes BNN, but in Hunter, political campaigns are “all about promising to save jobs and keep the coal industry going long enough to safeguard livelihoods.”

Meanwhile, the country is stuck in a climate stalemate. “At stake is the policy of a nation that is a potential renewable energy superpower but still gets 70% of its electricity and about a quarter of its exports from fossil fuels. Hastening an end to the nation’s vast coal industry would make a major contribution to the global effort to limit planetary warming,” says BNN.

In a recent speech in Perth, Morrison said that if he’s re-elected, his government will tackle the climate challenge “in a way that maintains competitiveness of our traditional industries—not writing those industries off but strengthening them in efficient and technologically advanced ways.”

But BNN says workers in Hunter are not aiming to keep the coal industry going at all costs. Instead, they want to “come up with a realistic way to transition to clean energy without destroying the community.”

“We’re not planning for the future,” said Sue Gilroy, head of the Business Chamber in Singleton, a community with a population of about 22,000 at the heart of the coal mining region. “We could be diversifying and growing the other industries and the other opportunities that we have in Hunter.”

Australia has two federal houses of parliament: House of Representatives and the Senate. Voting is compulsory, with few excerptions. House of Representatives electorates have about 85,000 – 100,000 people with MPs elected through preferential voting. So a primary vote for a minor party will flow to one of the major parties until a candidate has 50% +1 of the vote. The Senate is elected based on state sized electorates with 6 senators up for election in a half senate election each three years through optional preferential proportional voting of Party groups. Seldom does a single political party have a majority in the senate, with proportional voting often resulting in one or two minor party candidates from each state. The Australian Greens are the largest of the minor parties presently with 9 senators, hoping to pick up 2 more this election. The Greens usually poll about 10-12% of the national vote .

This election is a little different. The opposition Labor Party is attempting to be a small target. They have a framework for climate action to achieve 82% renewables by 2030, and a 43% emissions reduction by 2030. But their primary climate policy does not mention phaseout of coal at all. This is the result of trying to double message in 2019 the coal communities which traditionally supported Labor and city voters who are demanding more ambituous climate Action.

The conservative side is the Liberal Party and the regional based National Party which are often termed the Coalition. The National Party traditionally represented farmers and farming communities but have moved to supporting the mining sector. On the conservative side there are two other important minor parties: Pauline Hanson One Nation, which is based on outright climate denial and also draws support from regional and mining interests with a base in Queensland. Preferences usually flow to Liberal or National Party.

The United Australia Party is also based in Queensland set up by mining billionaire Clive Palmer who has broad mining and processing interests including to open the Waratah Coal mine in the Galilee Basin in central Queensland near the Adani Carmichael mine. Palmer is bankrolling the United Australia Party with likely tens of millions of dollars. Palmer was a former financial supporter and member of the Liberal Party. Preferences usually flow to Liberal or National Party.

The Liberal Party is being challenged in their inner urban seats by ‘Teal Independents’ who are standing on policies of strong climate targets (50-60% by 2030), establishment of a Federal anti-corruption commission, and addressing the gender issues in the Australian parliament. There are 6 electorates under challenge by the Teal Independents: 3 in Sydney, 2 in Melbourne, 1 in Perth. All these Teal Independents are strong women candidates who see themselves as in the centre of politics, some of whom would likely have joined the Liberal Party. 2 of them come from strong Liberal Party tradition famillies. They are being partly financed by an organisation called the Climate 200 that collected donations from a wide variety of people so Independants could draw upon a similar budget to match established party candidates. It was set up by millionaire Simon Holmes aCourt, butwith a funding proviso that candidates raise dollar for dollar for their own campaign and draw upon a large community volunteer base.

The Greens hold one lower house seat in Melbourne. They are hopeful of being elected in another seat in Brisbane in a 3 way contest with the Liberals and Labor.

Many want to be rid of the Morrison Government, especially for greater climate action, but it will come down to contests in the 151 House of Representatives electorates, with different issues playing a part.

Even now there is an unseasonal substantial torrential rain and flood event in Queensland. Some areas have already been flooded twice since February this year and are experiencing a third flood event. This is impacting market gardens west of Brisbane, which will likely drive up fresh food prices. People are already complaining about the 5.1% inflation the rise in many groceries and fresh foods, the escalating prices for purchasing homes and escalating rents with a very tight rental market across Australia.

Will Australia turf the conservative Morrison Lberal/National Government out? One hopes so, even if we get a minority Labor Government that can start implementing a coherent framework that is insufficient but a positive start. And many of us are hopeful if Teal Independents are elected to sit on the crossbench they can negotiate with Labor to enhance their climate ambition.

MANY thanks for this detailed analysis, John. We’ll be watching closely May 21.