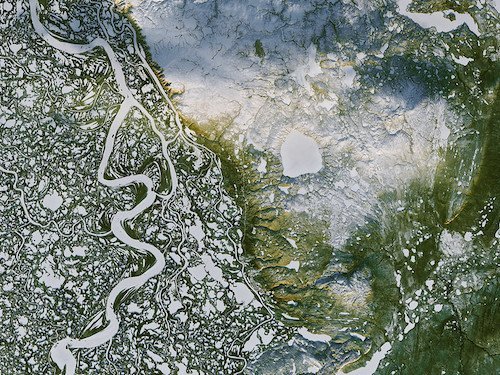 The changing agricultural landscape of Canada’s Northwest Territories is showing how rising global temperatures could affect food production, as growing conditions in the North become increasingly favourable, while heat waves and drought desiccate farmland in other regions.

The growing season in Yellowknife, NWT could see “as much as a 15-day increase in frost-free days” under projected climate scenarios, with average summer temperatures increasing by up to 1.9°C, said an Agriculture and Agri-food Canada (AAFC) spokesperson in an email to The Energy Mix.

“These projected changes could facilitate an expansion of cereal and forage crops in regions where soils permit,” with surveys indicating that “soils do not appear to be a limiting factor in these regions.”

But as the changing environment opens possibilities for northern food production, the benefits of cultivating new land will need to be weighed against the impacts on ecosystems and other local issues. The NWT’s vast peat deposits, which store up to 24 billion tonnes of carbon and which already face “dire threats” from human activities like logging, mining, and agriculture, could be further affected. The warming climate may also shorten the ice road season, with implications for local hunting, foraging ability, and food security.

Against the backdrop of rising pressure on food systems and the need for new production areas, the region’s complexity calls for strong collaboration to avoid the possible harm to local communities and ecosystems that could be caused by boreal agriculture development.

But Kevin Wallington, chair of the NWT’s Territorial Agrifood Association (TAA), said it might be possible to find the right balance to offset the risk of northern food production, enabling the region “to take leadership on tackling some of these challenges we face from a circumpolar standpoint.”

He added that NWT residents’ knowledge of northern landscapes and communities will be critical in finding ways to adapt the region’s agriculture to the changing environment.

“It’s going to be very important that we build strong partnerships with industry and academia so that we can work together and find solutions,” he told The Mix.

An ever-increasing human population is intensifying demand for global food supplies, roughly 80% of which is sourced from crops like cereals, vegetables, fruits, oilseeds, and tubers. But climate change is making food production unpredictable and causing “regionally different, but mostly negative, impacts on crop yields, quality, and marketability of products,” according to the Intergovernmental Panel on Climate Change (IPCC) report released in February.

Some regions are already experiencing the effects of climate change on agriculture. Warming temperatures in southern Europe have “negatively impacted yields of almost all major crops, leading to recent yield stagnation,” and a 1°C temperature increase in West Africa reduced millet yields by 10 to 20%, the IPCC says. Yield losses could brutally worsen food insecurity, both regionally and worldwide.

So far, the most damaging impacts on food supply are being avoided as growing regions shift with the changing climate patterns. Although boreal regions have remained largely undeveloped, converting 10 to 20% of northern land for agriculture could feed 250 million to one billion people, according to one study.

Study co-author Dr. Krishna Bahadur KC, a research scientist at the University of Guelph, said growing conditions in the North would improve as a result of rising temperatures, increased precipitation, and longer growing seasons. Other research led by KC found that by 2080, up to 1.85 million square kilometres in northern Canada could be suitable for wheat, corn, soy, and potatoes that could benefit local communities.

But cultivating new areas could also result in significant environmental, cultural, and economic consequences, similar to those being seen in the ongoing development of other critically sensitive ecosystems like South America’s Amazon region. KC found that clearing and ploughing the northern areas identified in his study could result in substantial losses of biodiversity and, if the whole area were developed, could release up to 15 gigatonnes of carbon stored in boreal forests and wetlands.

To offset the worst of these impacts, KC saidnorthward crop relocation could be done more strategically by only developing less critical areas that “might be beneficial for agriculture where, at the same time, we will not lose other environmental services like carbon storage.”

But cultivating new regions will still come at a cost, “and in the North that cost can be quite heavy,” Tim Rademacher, a post-doctoral research fellow at Harvard University, told The Mix.

Rademacher was part of another research team working to determine the optimal crop growing regions that can produce the greatest yields with minimal environmental impacts. Rademacher said potential yields in northern areas would be too low to compensate for the costs to the environment, but considering other factors—like regional environmental variations and food security—could have a small effect on his study’s results.

“I think if we factor in socio-economic factors, changing small areas to agriculture may still be worthwhile, and I would assume that integrating socio-economic factors would actually change the map [of crop relocation] to have small production areas in the North, despite the environmental impact,” he speculated. “But they would be relatively small.”

A First Agriculture Strategy for the NWT

In 2017, the Government of the NWT released [pdf] its first agriculture strategy, a five-year plan that aligns with Canada’s Agriculture Policy Framework (APF), the backbone of the country’s agriculture policy. Within the NWT’s strategy are 47 steps to “long-term goal of building a safe, sustainable, environmentally sound agriculture sector that is driven by community leadership and NWT residents,” said GNWT spokesperson Jacqueline McKinnon.

“With the changing climate, there may be opportunities for extending NWT food producers’ growing season, as well as opportunities for increased crop varieties. Discussions and collaborations amongst governments, growers, and sector partners continue as the agriculture sector continues to expand in the NWT,” McKinnon added.

The TAA’s Wallington is also looking at the opportunities of an extended growing season. He said challenges for agriculture in the NWT should be addressed to aid food producers. As a farmer himself, he said he’s had difficulty accessing support from federal programs because of gaps in legislation, and because funding packages are designed to accommodate Canada’s southern provinces rather than the unique needs of the NWT. Wallington wants to see the territory’s regulations, zoning, and land claims adjusted to facilitate new agriculture initiatives.

Indigenous residents in the region have made similar calls for more targeted agriculture funding. In 2018, a representative of the K’atl’odeeche First Nation submitted a letter to the NWT Minister of Industry, Tourism and Investment, stating that the Canada’s agriculture policy guidelines “appear to favour funding for [industry, tourism and investment] rather than for communities and, more specifically, work against First Nation interests in developing local agricultural initiatives.”

But if agricultural expansion in NWT is not developed carefully, it is likely to amplify any negative impacts the sector already has on First Nation communities. According to KC’s research, 10% of the area that could become cultivable is on unceded Indigenous land. Agriculture development could also undermine food security—despite the increase in production—if the environmental impacts disrupt traditional pathways.

Important to Work Together

Particularly in light of Canada’s colonial past, would-be developers of northern farmland must fulfill their obligations to “engage with Indigenous communities under Free, Prior, and Informed Consent; addressing the right to Indigenous self-determination and self-governance; and the reassertion of the Indigenous–Crown relationship as nation-to-nation rather than nation-to-stakeholder,” KC writes.

Alongside a growing interest for northern agriculture, the NWT has been engaging with residents and stakeholders to develop its position on Canada’s next APF, which was outlined by federal, territorial, and provincial governments in the Guelph Statement last November. The plan includes directives to “prepare for and respond to a changing climate” with measures to protect and improve various environmental elements, like biodiversity and habitat.

Though interactions of climate change and northern agriculture development are not a prominent topic in those policy discussions, emerging research indicates it could become an important issue in the years to come.

Wallington said there is potential to “build a viable food system in the Northwest Territories that is respectful of communities, is respectful of northern indigenous cultures,” and is respectful of the land. Pointing to the region’s high rates of food insecurity, and to health issues linked to the NWT’s reliance on imported food, he said the opportunities of northern agriculture could outweigh the risks. But he stressed that any approach must integrate the needs and perspectives of local residents and communities.

“It’s all the more important for us to be working together,” Wallington said.