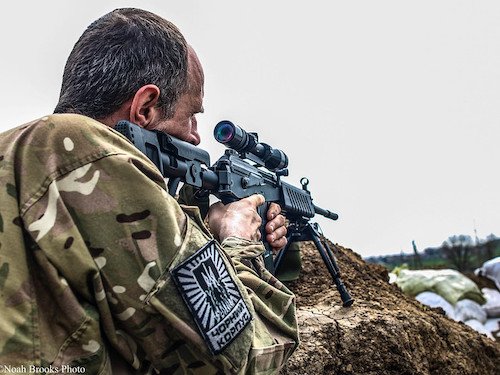 Noah Brooks for Ministry of Defense of Ukraine/flickr

Major geopolitical tensions could be resolved by electrifying transportation, a change that would dilute the concentration of power held by oil producers and redistribute it across producers of solar, wind, and other clean energies, analysts say.

“The ability to electrify transportation and get off combusting fossil fuels, and oil specifically, means we would solve massive geopolitical problems, which have been just a plague for the last 100 years,” said Adam Scott, executive director of Shift Action, a Toronto-based non-profit that advocates for sustainable investing.

As a lucrative commodity that drives the world economy, oil is a key driver of political and social change. And it’s been linked to multiple international conflicts like the 1953 CIA-assisted coup in Iran and the struggles for independence in South Sudan. Some estimates find that oil has been the cause of “between one-quarter and one-half of interstate wars since 1973.” The power imbalance created by oil arises from the raw commodity’s location in a few countries—now known as petrostates—that have amassed wealth and power from their control of the resource, CBC writes.

Global pricing also means oil-producing countries can leverage changing markets to their advantage in their dealings with other nations.

If you’re using the “gas weapon,” author Rupert Russell told CBC News, you “don’t have to mobilize armies. The whole system is set up. All you have to do is change the price and you can exercise this political lever.”

Research by University of Denver professor Cullen Hendrix suggests the connection between oil prices and militarism can influence conflicts. He says petrostates like Venezuela or Iran are more likely to engage in armed disputes during times of high oil prices, when they have more financial resources to bolster militaries. Notably, the recent Russian invasion of Ukraine both coincided with and helped to drive high prices.

But the decentralized structure of renewable energy production could reduce the petrostates’ chokehold on the energy sector, and removing the world’s dependence on oil for transportation fuel would deal the largest blow to the oil economy.

“Right now, for example, you have oil and gas in the North Sea, in the [Alberta] tar sands/oil sands, in Russia, in the Middle East. There’s a lot of power concentrated there, and those are centralized resources,” said Marie Claire Brisbois, a senior lecturer in energy policy at the University of Sussex in the United Kingdom.

With renewable energy sources, “it’s no longer possible to control energy resources the same way,” given that the actual energy source “is the sun, it’s the wind, it’s the waves.”

Despite concerns about the grid’s ability to power the extra demand from a large-scale electric vehicle rollout, or the need for more infrastructure to extend EVs’ range, experts say existing technology can already handle these issues.

But electrified transport is unlikely to entirely eliminate resource-driven geopolitical tension, and countries are already looking to establish footholds on the global power hierarchy by cornering markets for the supply chains that support emerging renewable technologies. The materials used to build vehicles and infrastructure are already coming into higher demand, and those resources could be exploited in ways that share “some parallels with oil,” said Thea Riofrancos, an associate professor of political science at Providence College in Rhode Island.

An electrified transition would likely change the longstanding dynamics around fuel, Riofrancos said. But she expressed concern about “a different kind of geopolitical tension” driven by the Global North’s framing of the energy transition as a matter of national security that creates incentives for mineral exploration at the expense of people in other countries.

“This could lead to a weakening of social, environmental, and labour considerations, as well as consultation with Indigenous populations,” CBC reports, citing Riofrancos.