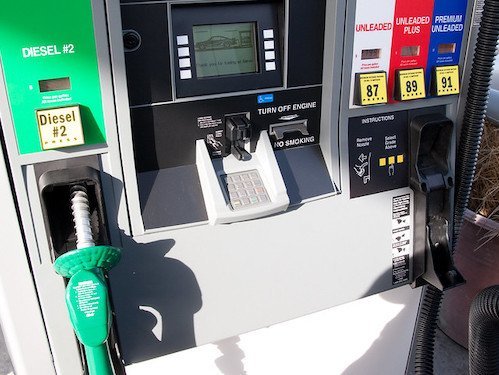 Even with gasoline prices hitting record levels, and the high cost of living taking centre stage in Ontario’s provincial election, the Doug Ford government was still moving in the wrong direction last month when it opted to roll back gas taxes last month, analysts say.

The temporary price break of 5.7¢ for gas and 5.3¢ per litre on fuel, conveniently timed for a June 2 vote, was enacted April 14 and is meant to run from July 1 to December 31, 2022. It’s just one part of a multi-billion-dollar spending spree that has the one-time advocate of small government leaning heavily on taxpayers’ money “to get him re-elected to a second term in office, relying on continued deficits to fuel campaign promises,” Global News writes.

The problem with this particular tax break, observers say, is that it will drive up greenhouse gas emissions while doing nothing to address the serious problems in the province’s transportation system.

A Cost of Living Election

A 6.7% inflation rate in March has all the parties in the provincial election focusing on their own versions of affordability in transportation, with Ford’s Conservative party refunding licence plate renewal fees and Liberal leader Steven Del Duca promising to bring transit fares across the province to $1 per ride, The Canadian Press reports.

But those quick fixes won’t make a dent in a period of inflation that is “largely an international phenomenon,” University of Ottawa economist Mario Seccareccia, told the news agency. “These are good gimmicks to get you re-elected,” he said, “but it isn’t the best way of addressing affordability,” or helping lower income earners hit harder by rising prices.

The Globe and Mail focused its criticism more specifically on gas tax reductions, in an early April editorial that cited Ford as “the latest provincial premier to look at the challenge of high oil prices—and see an opportunity to shower voters with money.” The article crossed partisan lines, with the Globe pointing fingers at Ontario, Alberta, Saskatchewan, and British Columbia for subsidizing drivers in response to high fuel costs.

“The problem with these policies? For starters, you have to own a car to get the benefit. In Alberta and Ontario, the more gasoline you use, the bigger your tax break,” the Globe wrote.

“Yes, the recent spike in gas prices has been tough on many Canadians,” the editorial added. “But prices are signals, and the economy works best when people pick up on them. The message oil prices are sending is: You can save money by driving less, or driving more efficiently, or not driving at all.”

That argument only goes so far for households that have no alternative to their daily car commute. But “another way to address the high cost of gas, rather than subsidizing drivers, would be to encourage non-drivers,” the Globe wrote. “Making public transit better, cheaper, and more frequent would cut Canada’s energy bill by reducing energy use rather than subsidizing energy bills.”

Queens University PhD candidate Joshua McEvoy took that argument a step further in an opinion piece for the Ottawa Citizen, pointing to the personal, social, and health costs of car-dependent cities and the lack of “reliable, convenient, safe, and accessible” alternatives.

“Since the end of the Second World War, we have designed cities to optimize the movement of cars and it is costing us dearly in multiple ways,” he wrote. Even before this year’s price surge, private vehicle ownership cost households C$8,600 to $13,000 per year, more than 21% of the median income in Canada.

“This is all before we factor in the public cost of roads and other car infrastructure, along with the huge costs of low-density, car-dependent housing developments that cost cities similar amounts to service as more dense neighbourhoods but with a fraction of the tax base to pay for it,” he added. “This dynamic is putting increasing pressure on city budgets and constraining their ability to meet climate targets.”

A shift to electric vehicles without changes in city planning won’t address those costs and impacts, he said, nor will it mitigate the “environmental issues associated with the resource extraction and manufacturing required for ever larger and heavier vehicles, electric or otherwise.”

And that’s where the Ford government’s support for a largely unwanted new Highway 413 through the Ontario Greenbelt, its decision to end tolls on Highways 412 and 418, and its determined opposition to one city council’s efforts to block urban sprawl show the provincial Conservatives “finding religion” on one aspect of a wider climate agenda while studiously ignoring the rest.

Ontario isn’t the only place where this argument is playing out. In California, Gov. Gavin Newsom stood accused of “climate arson” in late March after introducing a US$400 debit card per car owner, or $800 for people with more than one registered vehicle, to help offset high gasoline prices. The total cost of the plan: A cool $11 billion.

Newsom’s office cast the subsidy as a short-term fix.

“I don’t think there’s anyone in government who’s doing more than Governor Newsom on moving beyond oil and the governor is in no way backing down from those commitments,” said spokesperson Erin Mellon. “But at the same time, we have to acknowledge that Californians are struggling, that Putin’s war is driving up prices and not just oil prices.”

But community climate advocates were far from convinced.

“Transit riders get 3 months of free transit but honestly, $400 to subsidize gas guzzlers irrespective of type of car a motorist has and their income?” tweeted California YIMBY policy and data analyst Darrell Owens, who called the plan “regressive, state-sponsored climate arson.”

Environment California state director Laura Deehan said the rebate would “help a lot of people right now,” but warned that it was still “just a Band-Aid, and not a very good one. To permanently protect ourselves, we need to double down on the investments that will end our dependence on fossil fuels.”

Back in Ontario, McEvoy laid out a different path in is Ottawa Citizen post.

“We need to make alternative modes more appealing, convenient, and affordable,” and that starts “with governments at all levels investing in public and para transit, active transportation, ending urban sprawl, and following the lead of others in reducing or eliminating fares that limit mobility in our cities,” he wrote.

“Pursuing any of these measures would be a much better, more sustainable, and less regressive use of the $645 million Ford’s tax cut will cost,” he added. And “in doing so, not only will we address the cost of living and make our cities more livable, safer, and healthier places, we will also reduce carbon emissions, better connect people, and make our communities accessible to all.”