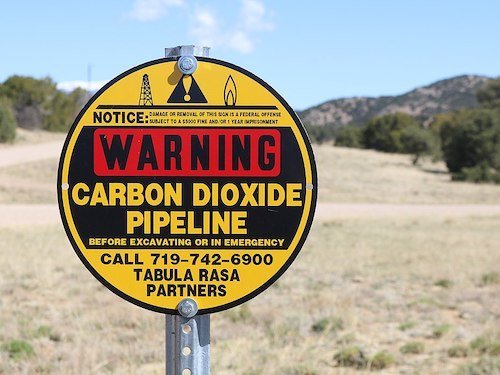 Carbon dioxide pipelines supporting a fast uptick in carbon capture and storage (CCS) could threaten the safety of countless communities across the United States, say experts, due to federal pipeline safety regulations that are woefully inadequate to cover the “flurry of multibillion-dollar CO2 pipeline proposals” now eligible for tax credits.

“The country is ill prepared for the increase of CO2 pipeline mileage being driven by federal CCS policy,” writes Richard Kuprewicz, an independent pipeline safety consultant and author of a recent report from Pipeline Safety Trust.

Pipeline safety regulations must immediately change “to rise to this new challenge” and win public confidence, he adds.

The U.S. Pipeline and Hazardous Materials Safety Administration (PHMSA) administers pipeline safety for the country’s more than 5,000 miles (8,050 kilometres) of pipelines that deliver CO2 to oil fields, where it is pumped underground to stimulate oil production. New proposals aim to use the same kind of infrastructure to transport carbon to underground storage for carbon removal, a strategy that many researchers say will be essential in the fight to limit climate change. Those activities could create the need for an additional 48,000 to 104,000 kilometres of pipeline, reports Grist.

The proposals are gaining traction and have the backing of the U.S. Department of Energy, which recently committed US$2.5 billion for CCS projects. One joint venture just announced by Occidental Petroleum and Enterprise Products will explore a CCS transportation network along the Texas Coast, and is set to benefit from a U.S. tax credit scheme that offers $50 per tonne of CO2 permanently sequestered.

But according to the Pipeline Safety Trust report, PHMSA’s regulations have “terrifyingly large gaps on carbon dioxide pipelines, including having no regulations if the CO2 is transported as a liquid or a gas, only as a supercritical fluid.”

These gaps are dangerous, says the advocacy group, as CO2 is a lethal asphyxiant that can travel large distances from the site of a pipeline rupture. Ruptures can open like a zipper to run down a significant length of pipe and “release immense amounts of CO2, hurl large sections of pipe, expel pipe shrapnel, and generate enormous craters,” the report says.

Pipeline ruptures can have devastating outcomes for communities, as illustrated in 2020 in Satartia, Mississippi, where a rupture released a CO2 plume that caused residents to feel dizzy, nauseated, and disoriented and sent 49 people to the hospital. PHMSA still has not released a report on the circumstances of the leak, Grist reports.

“That incident happened over two years ago,” said Pipeline Safety Trust Executive Director Bill Caram. “It’s crazy that communities are being asked to bear the burden of the risk of these pipelines when this report sits unreleased with all these unanswered questions.”

But communities are pushing back and calling for regulators to address safety issues. Landowners in South Dakota recently spoke up during the permit process for a proposal by Summit Carbon Solutions, and the company’s executives have agreed to personnel training and safety plans as per local and federal regulations, writes Aberdeen News. (It is not clear if these measures account for the shortcomings identified by Pipeline Safety Trust.)

Communities in neighbouring Iowa are also objecting to Summit Carbon Solutions’ pipeline plans, and are forming a grassroots coalition similar to the one that resisted the Dakota Access underground oil pipeline in 2016. The state’s Sierra Club chapter has also weighed in, reporting that the majority of counties that would be affected by CCS pipelines have filed objections with the Iowa Utilities Board.

“This is another example of how these pipeline projects are externalizing their costs onto us,” said Jess Mazour of the Sierra Club’s Iowa Chapter. “There is no direct benefit to our communities, yet our time, public money, and resources are exploited so private companies can profit. If landowners say no, and counties say no, and taxpayers say no; the answer should be no.”