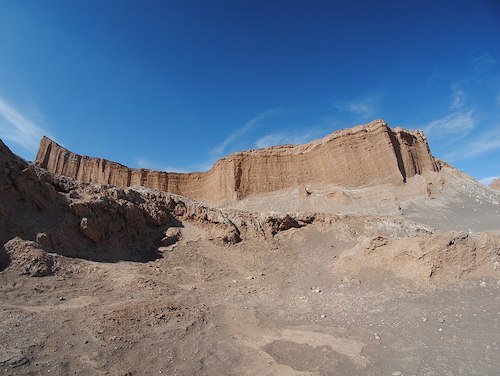 Mining of lithium in South America’s Atacama Plateau creates “severe” impacts for local communities and the environment that need to be addressed as production surges to meet growing demand for electric vehicle batteries and other power storage.

A new report [pdf] from the Natural Resources Defense Council (NRDC) recognizes the essential role of lithium, a “critical material” in fighting climate change—unless and until a better battery technology is developed. The report calls for a long list of extensive measures to reduce negative impacts and maximize gains from lithium mining.

Lithium is an abundant element, but is available in recoverable concentrations in only a few places in the world. The Atacama Plateau, a unique eco-region which straddles Argentina, Chile, and Bolivia, is a leading global source. To extract the metal, salty brines are pumped to the surface and evaporated over a period of many months; lithium carbonate is then extracted from what remains.

“This dry landscape includes internationally recognized wetlands and protected areas and is a critical refuge for migratory and native species,” the report states, warning that lithium mining is having a destructive impact on the unique ecosystem.

Brine extraction and evaporation contributes to ecological damage, and NRDC warns there has been inadequate research on fresh groundwater availability for human use and livestock. Lithium mining can rely heavily on water extraction, the report notes: each kilogram of lithium recovered requires the evaporation of between 400,000 and two million litres of water.

Chile, Argentina, and Bolivia each have their own approaches to lithium mining, with varying degrees of good intention, but all are found wanting.

The report calls for free, prior, and informed consent for Indigenous and local communities, citing poor implementation of existing benefits sharing agreements. Indigenous knowledge needs to be prioritized in modifying approaches to lithium extraction, identifying environmental damage, and managing environmental protection. As well, environmental monitoring, standards, and transparency must be strengthened, particularly with respect to water resources in an arid region.

Mandatory recycling of used batteries is needed to recover lithium as well as other valuable minerals, NRDC says, adding that the lithium mining countries of South America should have a role in the lithium circular economy.

Measures to reduce lithium demand also include improved energy efficiency of battery applications, urban planning to support walking, cycling, and transit rather than single occupancy vehicles, and other forms of energy storage.

Lithium customers, such as battery makers and EV manufacturers, can also implement supply chain reforms with independent third party certification, to ensure respect for the rights of local and indigenous communities and protection for the environment.

The report also calls for a moratorium on the brine extraction method. “Because brine evaporation is thought to exacerbate ecological exhaustion in the Puna de Atacama, and because the actors responsible for this activity have failed to disclose clear evidence establishing that it does not do so, precautionary measures should be taken,” it states. “In this instance, the burden of proof is on the extractive industry to show definitively that water availability is not threatened by brine evaporation, and until it has done so, it is in the public interest to cease this activity in the Puna de Atacama.”

The Democratic Republic of Congo (DRC) uses a different method to extract hard-rock lithium. But a report by Global Witness warns that the start-up industry could experience similar environmental and social issues. “Unless urgent steps are taken to bring lithium production in line with international standards and domestic laws, the industry could be seriously undermined by governance, environmental, and social risks.”

A separate report from Global Witness on mining of tin, tungsten, and coltan in the DRC found weak to non-existent enforcement of rules designed to prevent child labour, forced labour, and violent conflict. The report cites outright lying, corruption, and smuggling to neighbouring Rwanda in order to “launder” minerals that don’t conform with the rules.