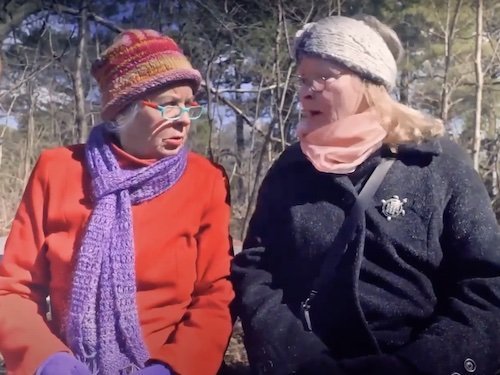 An Ontario seniors’ climate group is channelling two of Canada’s most beloved comedy characters, Mrs. Enid and Mrs. Eulalia of This Hour Has 22 Minutes, in a two-minute YouTube video that takes aim at Ontario Conservative leader Doug Ford’s climate policies.

Maude and Millie, played by two volunteers from Seniors for Climate Action Now (SCAN), are on a walk through a wooded area when Millie admits that she doesn’t feel she’s doing enough about the climate emergency. “You know, every time I turn on my gas stove, I worry that I’m tipping the balance,” she tells her friend. “And I feel personally responsible for all of those floods and fires and atmospheric rivers and heat domes.”

“I think the premier should feel responsible,” Maude replies. “Ontario’s emissions are higher now than when he started.”

“It’s no wonder,” Millie agrees. “Every time he opens his mouth, it’s as if a huge hot air balloon comes out.”

The video covers the news that Ontario has the second-highest greenhouse gas emissions of any Canadian province, after Alberta. That’s after the Ford government took office in 2018 and “cancelled a whole bunch of contracts for sustainable energy projects,” Maude recalls. “And it cost the province a lot of money.”

As they get up to leave the scene, the two friends venture off the path and find themselves blocked by a stand of trees. But they soon sort things out and get back on their way.

“If only we could get Ontario to change direction as easily as we just did,” Millie says.

Earlier this week, SCAN accused the Ford government of 33 (metaphorical) climate crimes and launched a campaign to align the climate emergency with voters’ top campaign concerns.