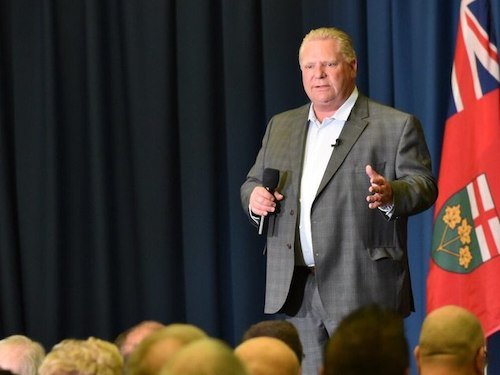 With a four-week election period in Ontario kicking off today, organizations across the province are hitting high gear in their efforts to push the climate emergency to the top of voters’ list of campaign concerns, while connecting climate solutions with the affordability, housing, and health crises the province is simultaneously facing.

More than 160 groups across the province have launched a Climate Emergency Campaign, promoting a 12-point agenda that includes binding, science-based climate targets, respect for Indigenous sovereignty, investment in a “thriving, regenerative, zero-emissions economy”, and reinstatement of an independent Office of the Environment Commissioner. Seniors for Climate Action Now (SCAN) is singling Ford out as a “climate hooligan” with a campaign that accuses the reigning Conservative government of 33 metaphorical “climate crimes” and lists a more succinct 10 climate reasons to defeat Ford.

(The Energy Mix publisher Mitchell Beer was a panelist Tuesday evening on a campaign webinar hosted by SCAN.)

Groups are also running “anyone but” campaigns aimed not so much at partisan support for any opposition party, but at defeating Conservative incumbents or keeping opposition seats out of Tory hands. The Ontario Voters Coalition is campaigning on a list of issues that puts climate alongside good government, housing, health care, education, and autism services, while the #NotOneSeat campaign is vowing to prevent Ford from winning a single seat (presumably including his own in Etobicoke North) in Toronto.

“In 2018, Doug Ford won a majority government with just 40% of the vote—including 11 seats in Toronto. Since then, he’s slashed Toronto’s city council, steamrolled our school boards, uprooted Ontario’s climate action, and presided over a disastrous response to the COVID pandemic,” the campaign site states.

“This June, we fight back.”

The latest and last pre-election polling, produced by Nanos Research for CTV News and CP24 and released Tuesday afternoon, has 36.9% of decided voters supporting Ford, against 30.4% for Steven Del Duca’s Liberals, 23.7% for Andrea Horwath’s New Democrats, and 4.3% for the Ontario Green Party led by Mike Schreiner. The latest update to the 338Canada projection, which combines the results of multiple polls, gave the Conservatives 39%, ahead of the Liberals at 30% and the NDP at 21%.

Those percentages translated into an overwhelming second majority for Ford, with 338Canada projecting 77 Conservative seats, 26 Liberals, 20 New Democrats, and one Green.

The potential for vote splits in Ontario’s first-past-the-post electoral system is already triggering much talk about strategic voting, in which a voter casts a ballot against the candidate whose win they want to prevent, rather than supporting the option they actually like best. There were also hopes that Ontario Liberals and New Democrats will cooperate post-election if Ford is held to a minority government, though both parties ruled that out in the run-up to the election call.

The chasm between much of the climate community and the Ford government—and the deep fears at the prospect of a second term—were encapsulated in SCAN’s 33 Climate Crimes, a series of short summaries produced by a team of volunteers. The lead fact sheet, Failure on All Fronts [pdf], recounts the government’s headline decisions to cancel 750 signed green energy contracts, eliminate the Office of the Environment Commissioner, scrap zero-emission vehicle subsidies and provincial tree planting programs, and rip out electric vehicle chargers that had already been installed along the regional GO Transit network.

Two evaluations of the Ford climate plan by Ontario Auditor General Bonnie Lysyk “amount to a searing indictment of the Ford government’s response to climate breakdown,” the fact sheet states. “Since 2018 the Ford government has made no progress and is ill-equipped to deal with the climate emergency.”

David Robertson, chair of SCAN’s education committee, said the Climate Crimes motif was inspired by none other than United Nations Secretary-General António Guterres, who’s used similar language in response to the most recent working group reports from the Intergovernmental Panel on Climate Change (IPCC).

Robertson pointed to the lead line in last week’s election-focused provincial budget, asserting that Ontario is getting stronger. That would normally be good news, he told the organization’s launch webinar Tuesday evening, but a real package of measures to strengthen the province would include:

• Introducing an adaptation plan that supports communities on the front lines of the climate emergency;

• Strengthening the health system “to deal with the health casualties of the climate crisis”;

• Subsidizing households to shift to heat pumps and zero-emission vehicles;

• Supporting a low-carbon transition that leaves no one behind;

• Building an economic and jobs plan around the electrification of everything.

“The Ontario budget does none of those things,” Robertson said. Instead, the budget allocates billions of dollars to new highways and urban sprawl, resource megaprojects, and a “litany of bad energy choices”.

Other greatest hits in the SCAN fact sheet series include:

• Pulling out of a carbon cap-and-trade agreement with Quebec and California and mounting a costly, ultimately unsuccessful attack on the federal carbon price;

• Making public transit an afterthought in the provincial climate plan;

As The Mix went to virtual press, Environment Minister David Piccini’s office had not responded to a request for comment on the SCAN materials.