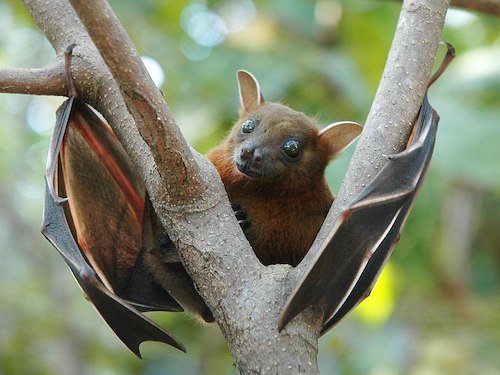 Climate change has already created thousands more opportunities for viruses to jump to new hosts, as mammal species are driven to new geographic ranges and mingle in new combinations, say scientists in a study that finds bats responsible for the majority of novel virus sharing—along pathways that facilitate emergence in humans.

“At least 10,000 virus species have the capacity to infect humans, but at present, the vast majority are circulating silently in wild mammals,” write Georgetown University biologist Colin Carlson and disease ecologist Gregory Albery in the abstract to their study, an early draft of which was published in the journal Nature last week.

But global heating and land use changes—driving deforestation, for example—are already enabling “zoonotic spillover,” or the transfer of a pathogen from its accustomed wild animal host to a brand new, and immunologically vulnerable, human one.

Carlson and Albery modelled the relation between the mass movements of 3,3139 mammal species as they react to 2°C global warming, their shrinking habitats, and how often viruses jump to new hosts, over the next 50 years. Their study predicts that “species will aggregate in new combinations at high elevations, in biodiversity hotspots, and in areas of high human population density in Asia and Africa, driving the novel cross-species transmission of their viruses an estimated 4,000 times.”

The study exposes the profound injustices at the heart of the climate crisis, said Jaron Browne, organizing director of the Grassroots Global Justice Alliance, in an interview with PBS.

“African and Asian nations face the greatest threat of increased virus exposure, once again illustrating how those on the front lines of the crisis have very often done the least to create climate change,” said Browne.

In a finding that “may be particularly ominous for humans,” notes the New York Times, the new study flagged bat species in Southeast Asia as particularly likely vectors for zoonotic spillover. The involvement of bats in the 2002 outbreak of severe acute respiratory syndrome (SARS) has been confirmed, and the little mammals have also been implicated in the emergence of COVID-19.

“As of now, many bat species in that region are limited to small ranges and don’t come into contact with each other much. But as the planet warms, these bats will fly quickly to suitable climates and encounter new species,” the Times reports.

As for the window of opportunity to prevent “zoonotic spillover,” the study authors write that an ecological transition “may already be under way,” and that holding warming under 2 °C within the century “will not reduce future viral sharing.”

“It is not preventable, even in the best-case climate change scenarios,” Albery told PBS.

Given this reality, the authors said there is an urgent need “to pair viral surveillance and discovery efforts with biodiversity surveys tracking species’ range shifts,” especially in rapidly warming tropical regions that harbour the most human-transmissible germs.

And humanity must double down on preventing further warming, they add. Carlson told PBS that reducing the risk of infectious disease spread will demand the phasing out of fossil fuels.