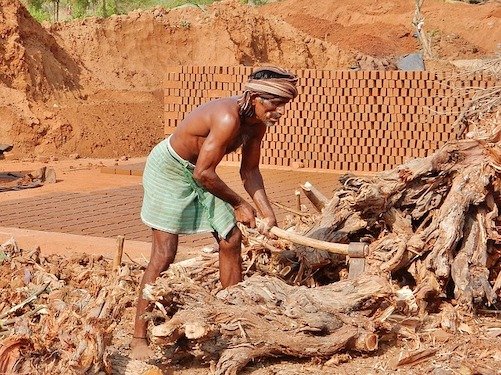 India’s continuing, brutal heat wave is drawing new attention to the country’s heavy dependence on coal-fired electricity, with the majority of the country’s coal power plants running low on fuel and a handful of them having to shut down.

“Out of India’s 165 coal plants, 94 are facing critically low coal supplies while eight are not operational as of Sunday,” The Associated Press reports, citing data from the country’s Central Electricity Authority. “This means stocks have dropped below 25% of normal levels.”

The problem is not that India ran short of coal, AP explains, but that its power utilities were caught off-guard by a heat emergency made more likely by climate change. Many of the country’s coal plants routinely ignore government rules that require them to keep 24 days of fuel on hand, and that wasn’t a problem during a spring season that stayed cool across most regions.

But as temperatures rose, “suddenly the demand started picking up and the inventories started declining much, much faster than anticipated,” said Vibhuti Garg, an energy economist at the Institute for Energy Economics and Financial Analysis. “And this becomes a kind of panic situation that they’ll start running out of coal pretty soon.”

Power outages can also be caused by inadequate demand forecasts that make it harder to get fuel delivered. “We don’t have enough resources to do proper forecasting,” Garg told AP. “The hike in demand should not have come as a surprise.”

A chart accompanying the AP story lists maximum temperatures ranging from 44 to 44.7°C last Friday. That was after news reports that March brought India its highest maximum temperatures in 122 years, April was scorching, and May was forecast to be even worse for more than a billion people on the subcontinent.

The continuing heat wave means the coal shortages hit “as blisteringly high temperatures are sweeping over parts of the country, prompting authorities to close schools, sparking fires at gigantic landfills, and shriveling crops as a cool spring turned into unrelenting heat,” the news agency writes. “The situation highlights India’s pressing need to diversify its energy sources, as demand for electricity is expected to increase more than anywhere else in the world over the next 20 years as the densely populated country develops.”