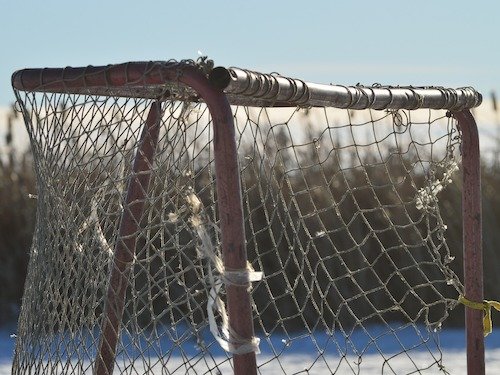 When several of Canada’s top hockey players came to play at a pond hockey tournament in Hay River, Northwest Territories earlier this spring, they also came to talk climate, and locals were ready for the conversation.

On the North’s calendar since 2008, Hay River’s Polar Pond Hockey tournament “provides a chance for anyone from the small towns sprinkled throughout Canada’s Northwest Territories to shake free from their long, dark winter,” writes ESPN.

This year, the tournament was also the occasion for Olympic hockey medalist Meghan Agosta and three former Edmonton Oilers, Craig MacTavish, Andrew Ference, and Curtis Glencross, to play their favourite game with eager locals—and to talk about the threat posed to that game by climate change.

While the ice up north may look eternal, notes ESPN, it is anything but, and tournament regulars know it. “As volunteers started to prep the rinks for the 2019 tournament, temperatures crept above freezing and the river ice turned soupy. In the closing days of winter in one of North America’s northernmost towns, it was too warm to play hockey.”

Ambassadors for the Climate and Sport Initiative, the four famous hockey players spoke from the heart about their sense of loss as Canadian winters have warmed too much to allow the hours of play on backyard rinks that they enjoyed as children.

The citizens of Hay River are “aware of and wary of the changes” that global warming is bringing to the North, writes ESPN.

“It was colder before,” said Robert Bouchard, Hay River’s former deputy mayor and one of the hockey tournament’s initial organizers. “We’re not the Bahamas, but it’s getting warmer.”

At this year’s tournament, an auction was held to raise money for an electric ice resurfacer. And during the auction, “as Bud Lights started to fill up their tables and loosen their wallets, the attendees—a group of mostly blue-collar hockey players—listened intently as a series of speakers laid out the rising challenge of a problem that is often scoffed at or deemed too political by many.”

With his 16-year career in the NHL behind him, but his love of hockey undiminished, Andrew Ference played with local kids and affirmed, “that’s the power of sports.”