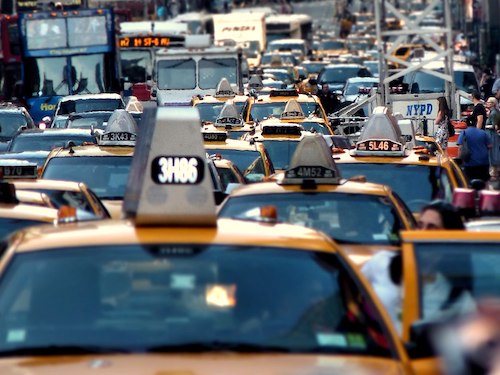 State, local, and federal emissions policies already stand to cut United States transportation emissions in 2030 by 19% from 2019 levels, but an expanded “all-in” climate strategy could boost the cuts to 34% by the end of the decade, new analysis finds.

This single sector has the potential to deliver one-fifth of the emissions reductions needed to successfully reach President Joe Biden’s climate target of 50 to 52% reductions by 2030 from 2005 levels, according to the report from climate advocacy coalition America Is All In.

“We’ve actually made a lot of progress,” said Nate Hultman, director of the Center for Global Sustainability at the University of Maryland and the corresponding author of the report, which states that additional efforts by Congress, state and local governments, and the private sector could achieve “a more ambitious level than usually identified.”

Elements of the all-in strategy include continued federal incentives for the purchase of electric vehicles, zero-emission vehicle mandates in cities and states, setting targets for municipal EV fleets, updating building codes, and from the private sector, investing in research and development of alternative fuels, writes Utility Drive.

The program promises to “fund projects that help fight climate change and save Americans money on gas.” The program will require states to develop carbon reduction strategies in consultation with metropolitan planning organizations (MPOs) responsible for transport policies in urban areas.

“As the sector generating the most carbon emissions in the U.S. economy, transportation must play a leading role in solving the climate crisis,” said Transportation Secretary Pete Buttigieg.

“The Carbon Reduction Program will help reduce pollution from transportation and move us closer to the President’s ambitious goal of cutting emissions in half by 2030.”

New and developing technologies are also raising hope for emissions cuts in the transportation sector. Nissan and NASA are now collaborating to develop an all-solid-state sulfur-selenium battery that uses less space than a lithium-ion battery and can recharge in 15 minutes, reports The Independent.

“Instead of taking a battery off the shelf, we determined we needed to develop a battery from scratch,” said NASA researcher Rocco Viggiano.

“A solid-state sulphur-selenium battery is cool to the touch and doesn’t catch fire. It has a slimmer profile than lithium-ion batteries and has better energy storage. It can take a beating and still operate, often in less than ideal conditions.”

A pilot launch for the new battery is planned for 2024, and taking it to full production in 2028 and would be “game-changing” for the electric car industry, The Independent says.