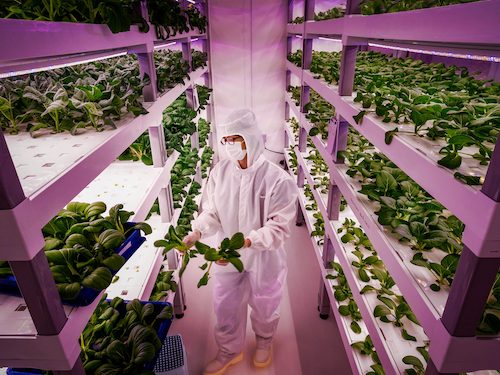 The vertical farming industry has taken off with the dramatic drop in LED lighting prices over the last decade, and investors are taking note, just as an array of influences including the climate crisis drive up interest in locally-produced food delivered via shorter, more reliable supply chains.

Experts say the industry still faces the challenges that come with “going against physics.” But “at a time when supply chain disruptions continue to slow distribution, consumers embrace healthy eating habits, and climate change is expected to affect crop yields, a practice known as controlled-environment agriculture, including indoor vertical farms relying on artificial light and technology, is attracting venture capitalists,” reports The New York Times.

Indoor vertical farms produce food from stacks of plants in vertical rows growing under controlled lighting and climate conditions. They offer the prospect of using space efficiently to produce food regardless of local climate: instead of choosing growing locations based on environmental factors, vertical farm warehouse locations are chosen for access to major highways.

Controlled-environment agriculture has been practiced since the 1970s ,but for a long time it was financially impractical due to the high cost of energy, space, and materials. But when LED prices fell by 94% between 2008 and 2015, the industry became marketable. Now, with investors moving into the space, vertical farming is expected to grow to US$9.7 billion by 2026, up from $3.1 billion in 2021, says Research and Markets.

But indoor food production is still expensive, and the industry will need to overcome high energy costs, technological limitations, and limited scalability to be competitive.

“LED’s are not going to go down much more” in cost, said Morgan Pattison, an adviser to the U.S. Department of Energy. “Where investors are going against physics, they are going to have a hard time.”

Despite the inherent limitations, several vertical farm companies are striving to expand their place in the market, some with the backing of very large industry players.

In addition to Plenty Unlimited, which does business with Albertson’s grocery stores and counts Walmart as an investor, Manhattan-based Bowery Farming operates three farms in New Jersey and is establishing a 150,000-square-foot food farm at a former steel plant site in Pennsylvania. Upward Farms, based in Brooklyn, incorporates aquaculture in its crop growing scheme to use the fish waste for fertilizer, and is building a 250,000-square-foot food warehouse, also in Pennsylvania.