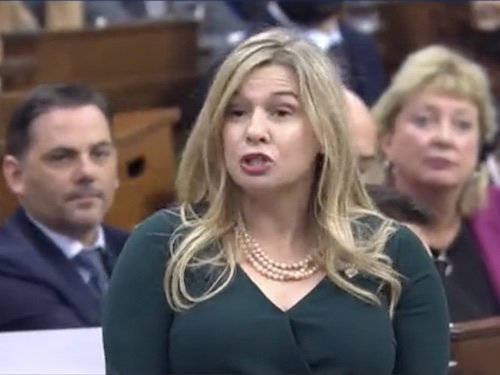 A private email shows a Conservative MP from Alberta calling an NDP-initiated study into the relationship between resource development and increased violence against Indigenous women and girls “disgraceful.”

Stephanie Kusie (CPC, Calgary Midnapore) made the comments in an exchange that happened ahead of a Tuesday meeting of a House of Commons committee set to study the issue, which was flagged as a concern by the National Inquiry into Missing and Murdered Indigenous Women and Girls, The Canadian Press reports.

The final report detailed how the inquiry heard from witnesses and received other evidence about the risk of transient, largely male work forces tied to big resource projects committing acts of physical or sexual violence against Indigenous women. The inquiry’s findings pointed to reports of increased cases of drug and alcohol-related offences, as well as harassment and assault.

Diane Redsky, executive director of the Winnipeg-based Ma Mawi Wi Chi Itata Centre, told the status of women committee on Tuesday that whenever groups of men with money parachute into an area for a temporary amount of time, violence against women happens.

She was among the witnesses Tory MPs had asked to testify.

Conservative committee chair Karen Vecchio (CPC, Elgin-Middlesex-London) had emailed some of her Tory colleagues in Alberta several weeks earlier seeking suggestions for potential witnesses for the study, along with possible lines of questioning.

The email was inadvertently sent to the federal NDP. The party provided the initial email, along with a response received from Calgary MP Stephanie Kusie, to The Canadian Press.

The response last Friday shows Kusie, who does not sit on the committee, saying, “In my opinion, this is disgraceful.”

She suggested Vecchio find a natural resources company that is owned by First Nations, adding that these companies contribute money to First Nations initiatives.

“Disadvantaged groups will never get ahead while the collective left limit their prosperity,” she wrote.

Kusie said in a statement Tuesday what she found disgraceful was that the study failed to acknowledge how the natural resources sector has often contributed positively to Indigenous communities.

Vecchio told CP Tuesday that she supports the study because the safety of women and girls is most important to her above all else.

She said any possible safety impact of the resource development sector should be explored, adding that Conservatives have made sure to include witnesses that can speak to the issue of human trafficking.

“When I’m looking at this, I’m not looking specifically at the type of resources that are being extracted. What I want to look at is: If these things are happening, how can we stop it?” said Vecchio.

“How can we ensure that there’s proper education, awareness, that there are proper policies to ensure that these types of things are not happening in our communities, and that young women and girls are not victimized.”

Vecchio is the Conservative critic for women, gender equality and youth.

MP Leah Gazan (NDP, Winnipeg Centre), who sits on the committee and brought forward the idea for the study, said it was unfortunate that another MP called a deeper look into the issue “disgraceful”.

“It’s the dismissal of the ongoing crisis of violence and genocide against Indigenous women by some members of Parliament,” said Gazan. “I have to say what’s disgraceful is that instead of wanting to help end the violence, they’re more concerned with protecting the profits and reputation of the big fossil fuel companies. That warrants an apology.”

Several years ago, Prime Minister Justin Trudeau drew ire from some Conservatives and workers in the resource sector for suggesting that bringing workers into a rural region carried with it gender impacts.

This report by The Canadian Press was first published April 26, 2022.