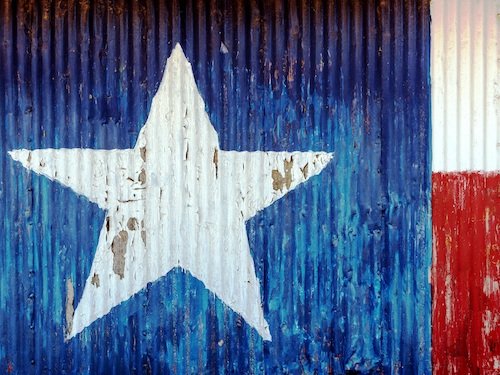 For Alán de León, natural disasters are a way of life. Growing up in Houston, de León knew that late summer meant hurricane season, a time when his family took special care to save money and stock up on extra food.

In recent years, those storms have gotten worse because of theclimate crisis, The Guardian reports, in a post republished by Covering Climate Now. When Hurricane Harvey hit in August 2017, flood waters swallowed de León’s father’s house up to its roof. In February 2021, when Winter Storm Uri knocked out power across the state, de León’s family huddled in the dark, with candles as their only source of light and warmth; it was so cold de León found it unbearable simply to move.

In more ways than one, Texas is ground zero for the climate emergency. The state is home to many of the biggest names in fossil fuels, corporations that have helped power the nation and world for decades—but have also knowingly lied about the dangers of burning those fossil fuels. Now, along with supercharged hurricanes, the climate crisis threatens Texans with extreme heat, drought, wildfires, and sea level rise on the Gulf Coast. The non-profit Trust for America’s Health rates Texas among the states that are simultaneously most vulnerable to climate effects and the least prepared.

In 2021 polling by the Yale Program on Climate Change Communication, 65% of Texans said they are worried about global warming—on par with the nationwide average—and clear majorities said they want politicians to do more about it. But Texas is also the site of broadscale voter suppression efforts, which contribute to leaders being unresponsive to voters’ concerns, experts and advocates say.

“If the attitudes of our communities were proportionally represented, I think we would see more climate action,” said de León, who serves as policy and advocacy manager for MOVE Texas, a non-partisan grassroots group that specializes in voter mobilization. “We’re not seeing that, though, and the reason, in part, is we have this democracy problem.”

Harvey was responsible for 103 deaths in Texas, and Uri killed 246, according to official figures, though for Uri the actual toll was probably higher. Today, de León said, the psychological impact of those storms is unmistakable. When it rains, many in his community are afraid to go outside. This past winter, a forecast cold front prompted anxiety and panic buying in stores. The weather passed without incident, but to de León it was a grim sign of the times.

“If there’s a natural disaster now, the mindset is you’re on your own,” he said. “Help isn’t going to come. That’s how little faith we have that our public officials will keep us safe.”

An anti-climate tack might not surprise in a state where Republicans boast the governorship, both U.S. senate seats, and significant majorities in the state house and senate—not to mention the fossil fuel ties that permeate the halls of power in Austin. “There are politicians in Texas who would consider climate action an explicit threat to the industry they’re in government to promote,” said Adrian Shelley, who directs the Texas office of Public Citizen, a non-profit consumer advocacy group.

But party control and fossil fuels’ influence alone don’t explain the Lone Star state’s slow roll on climate. Due to partisan gerrymandering, political representation at both the state and federal level is skewed away from Democrats, who more often favour climate action. In the 2020 general election, Republican congressional candidates received 53% of the popular vote—yet they were awarded 64% of seats, accounting for 23 of Texas’ 36-member congressional delegation in Washington.

That said, many Republican voters in Texas also favour climate action. In detailed polling by Climate Nexus, 71% of Texans this February said a complete transition to clean, renewable energy should be a “top” or “important” priority for the state. Lawmakers, meanwhile, routinely pass measures to stymie efforts by cities and other municipalities wanting to make their own climate progress; one 2021 law effectively banned local governments from favouring clean energy use to lower emissions.

Gerrymandering “reduces competition in elections and basically removes incentives for legislators to be responsive to the public”, said Samuel Wang, who directs the Princeton Gerrymandering Project, a non-partisan research group. The project’s Redistricting Report Cards give Texas’s congressional and state senate maps “F” grades, indicating the maps are among the least fair nationwide.

Gerrymandering also means the “decisive election,” Wang said, is often not the general election but the party primary. Although many Republican voters might favour climate action, it’s typically not their top voting issue. Amid America’s polarized political landscape, voters tend to back their preferred party, regardless of the candidate, so even primary winners hostile to climate action can count on voters who would otherwise favour it.

“Non-competitive primaries have a strong tendency to remove climate from the conversation,” Wang said.

Due to population growth, Texas enters the 2022 election cycle with two new congressional seats (for a total of 38). People of color, especially Latinos, accounted for 95% of growth—yet the new congressional map includes fewer districts where non-white voters “can realistically sway election outcomes”, according to The Texas Tribune.

Republican lawmakers who drew the state’s maps insist race wasn’t a factor. But Miguel Rivera, voting rights coordinator at the Texas Civil Rights Project, says the maps’ lines tell a different story. He says they elaborately contort to “crack” up or “pack” in communities of colour. “The Texas lawmakers who voted in favour of [these maps] are giving Texans a very clear message that they’re willing to put their own agendas ahead of the will of the people,” Rivera said.

De León, the MOVE Texas activist, lives in Texas’ 29th congressional district, whose lines cut a jagged, reverse-C around Houston’s east side—and, in doing so, pack in much of the area’s Latino population. Five years on, Hurricane Harvey damage remains plain to see in parts of the district, de León said, with some families and businesses still awaiting promised aid that was never delivered. The district is also home to a legion of petrochemical facilities and the Port of Houston, where fossil fuels are exported from Texas. This means area residents must also contend with the public health consequences of fossil fuels: cancer, respiratory illness, cardiovascular disease, and more.

Texas has also pushed through other voting policies that critics say are clearly intended to limit the franchise for minority voters. Last year, citing widely debunked claims of voter fraud in the 2020 election, Texas Republicans passed an expansive elections bill that bans drive-thru voting, curtails early voting in diverse communities (while expanding it in smaller, Republican-leaning areas), empowers partisan “poll watchers”, and criminalizes various forms of voter assistance that can be critical in helping some voters to the polls, among other measures. Many of the law’s provisions roll back policies meant to make voting safe and accessible amid the coronavirus pandemic, which were implemented in 2020 with particular effectiveness in Houston’s diverse Harris county.

Partisan attacks on voting and other democratic norms stand in the way of needed climate action all over the country, not just in Texas. “We often differentiate our ideas about democracy and climate, but they’re not separate issues,” said Diana Faraj, voting rights program manager at the League for Conservation Voters. “The overwhelming majority of Americans want free and fair elections that represent their interests. They also want [a safe climate]. So, the suppression of votes both undercuts their power and perpetuates environmental harm.”

In the absence of federal legislation to take on gerrymandering and other voter suppression tactics, some states have instituted independent redistricting commissions to help quell overly partisan election outcomes. In Texas, though, electoral maps remain firmly in the grip of the legislature. Numerous groups, including the Texas Civil Rights Project and the U.S. Department of Justice, have filed legal challenges to allegedly discriminatory aspects of the state’s voting laws. Another spate of lawsuits, including from Public Citizen, target the state’s climate and energy policies. Whether these suits will be successful, and how quickly, is unclear. In the meantime, groups are mobilizing to educate and organize around these issues.

De León’s MOVE Texas is among them. On a given day, MOVE Texas activists are registering voters across the state and engaging with local leaders to build out climate plans, despite difficulties imposed from Austin. But de León worries: “It gets to the point where you can’t fully out-organize this,” he said.

“We can keep coming up with new ways to fight this battle, but the challenge is getting steeper and steeper every time.”