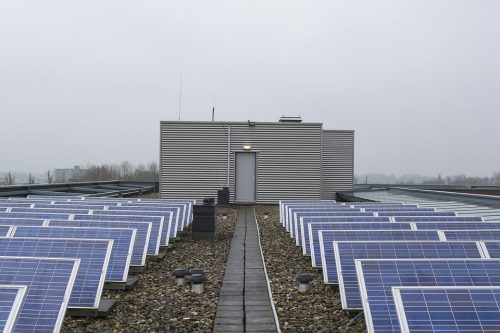 America’s electric power system is undergoing radical change as it transitions from fossil fuels to renewable energy. While the first decade of the 2000s saw huge growth in natural gas generation, and the 2010s were the decade of wind and solar, early signs suggest the innovation of the 2020s may be a boom in “hybrid” power plants.

A typical hybrid power plant combines electricity generation with battery storage at the same location. That often means a solar or wind farm paired with large-scale batteries, a team of three researchers for the U.S. Lawrence Berkeley National Laboratory (LBL) writes for The Conversation. Working together, solar panels and battery storage can generate renewable power when solar energy is at its peak during the day and then release it as needed after the sun goes down.

A look at the power and storage projects in the development pipeline offers a glimpse of hybrid power’s future.

The team at LBL found that a staggering 1,400 gigawatts of proposed generation and storage projects have applied to connect to the grid—more than all existing U.S. power plants combined. The largest group is now solar projects, and over a third of those projects involve hybrid solar plus battery storage.

While these power plants of the future offer many benefits, they also raise questions about how the electric grid should best be operated.

Why Hybrids Are Hot

As wind and solar grow, they are starting to have big impacts on the grid.

Solar power already exceeds 25% of annual power generation in California and is spreading rapidly in other states such as Texas, Florida, and Georgia. The “wind belt” states, from the Dakotas to Texas, have seen massive deployment of wind turbines, with Iowa now getting the majority of its power from the wind.

This high percentage of renewable power raises a question: How do we integrate renewable sources that produce large but varying amounts of power throughout the day?

That’s where storage comes in. Lithium-ion battery prices have rapidly fallen as production has scaled up for the electric vehicle market in recent years. While there are concerns about future supply chain challenges, battery design is also likely to evolve.

The combination of solar and batteries allows hybrid plant operators to provide power through the most valuable hours when demand is strongest, such as summer afternoons and evenings when air conditioners are running on high. Batteries also help smooth out production from wind and solar power, store excess power that would otherwise be curtailed, and reduce congestion on the grid.

At the end of 2020, there were 73 solar and 16 wind hybrid projects operating in the U.S., amounting to 2.5 gigawatts of generation and 0.45 gigawatts of storage.

Scarcely 16 months later, solar and hybrids dominate the development pipeline. By the end of 2021, more than 675 gigawatts of proposed solar plants had applied for grid connection approval, with over a third of them paired with storage. Another 247 gigawatts of wind farms were in line, with 19 gigawatts, or about 8% of those, as hybrids.

Of course, applying for a connection is only one step in developing a power plant. A developer also needs land and community agreements, a sales contract, financing, and permits. Only about one in four new plants proposed between 2010 and 2016 made it to commercial operation. But the depth of interest in hybrid plants portends strong growth.

In markets like California, batteries are essentially obligatory for new solar developers. Since solar often accounts for the majority of power in the daytime market, building more adds little value. Currently 95% of all proposed large-scale solar capacity in the California queue comes with batteries.

5 Lessons on Hybrids and Questions for the Future

The opportunity for growth in renewable hybrids is clearly large, but it raises some questions that the research team at Berkeley Lab has been investigating.

Some of their top findings:

• The investment pays off in many regions. We found that while adding batteries to a solar power plant increases the price, it also increases the value of the power. Putting generation and storage in the same location can capture benefits from tax credits, construction cost savings, and operational flexibility. Looking at the revenue potential over recent years, and with the help of federal tax credits, the added value appears to justify the higher price.

• Co-location also means trade-offs. Wind and solar perform best where the wind and solar resources are strongest, but batteries provide the most value where they can deliver the greatest grid benefits, like relieving congestion. That means there are trade-offs when determining the best location with the highest value. Federal tax credits that can be earned only when batteries are co-located with solar may be encouraging suboptimal decisions in some cases.

• There is no one best combination. The value of a hybrid plant is determined in part by the configuration of the equipment. For example, the size of the battery relative to a solar generator can determine how late into the evening the plant can deliver power. But the value of nighttime power depends on local market conditions, which change throughout the year.

• Power market rules need to evolve. Hybrids can participate in the power market as a single unit or as separate entities, with the solar and storage bidding independently. Hybrids can also be either sellers or buyers of power, or both. That can get complicated. Market participation rules for hybrids are still evolving, leaving plant operators to experiment with how they sell their services.

• Small hybrids create new opportunities: Hybrid power plants can also be small, such as solar and batteries in a home or business. Such hybrids have become standard in Hawaii as solar power saturates the grid. In California, customers who are subject to power shutoffs to prevent wildfires are increasingly adding storage to their solar systems. These “behind-the-meter” hybrids raise questions about how they should be valued, and how they can contribute to grid operations.

Hybrids are just beginning, but a lot more are on the way, the LBL team concludes. More research is needed on the technologies, market designs, and regulations to ensure the grid and grid pricing evolve with them.

While questions remain, it’s clear that hybrids are redefining power plants. And they may remake the U.S. power system in the process.