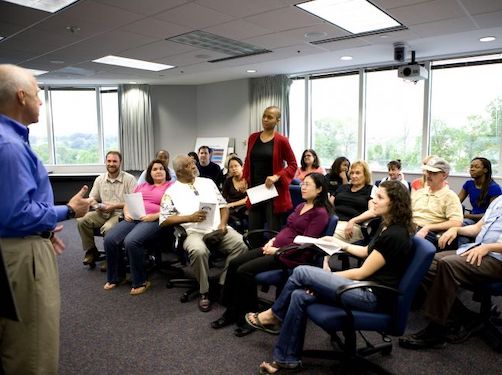 Economic security through a basic income must be at the centre of the just transition off fossil fuels, and Canadians need the wherewithal to build resilience in their own communities, the Green Resilience Project concluded earlier this month, based on a series of 33 local conversations involving more than 900 participants across the country.

Canadians are increasingly exposed to climate impacts and want to do something about the climate emergency, the year-long project states in its final report, but they often lack the resources and political clout to take action. The report calls on governments and policy-makers to:

• Incorporate basic income into Canada’s plan for a just transition;

• Design income security and climate policies that aim to improve individual and collective quality of life;

• Empower people and communities with the tools and resources they need to build or strengthen resilience;

• Ensure that corporations and the wealthy pay their fair share.

“Conversation participants talked about the challenges they face in their day-to-day lives and explored solutions that have the potential to build or strengthen community resilience, ensuring everyone has what they need to navigate a changing environment and economy as Canada moves toward net-zero emissions,” the project team writes. Across the series of sessions, hosted by a network of local partners, “we encountered hope, fear, grief, and a clear sense of urgency to implement transformative solutions that make life better for everyone.”

• Canadians “are increasingly exposed to climate impacts”, particularly if they face income insecurity or other forms of financial precarity, “but are often unable to participate in proportionate climate solutions due to systemic barriers.”

• Participants were “interested in solutions that make tangible improvements to their lives,” including accessible and affordable locally-grown food, energy-efficient housing and public transportation, and stronger local economies, services, and infrastructure.

• But many participants were “skeptical of their ability to take meaningful action on climate change and income insecurity,” knowing they have so much less influence on big-picture issues than governments and corporations. “Many feel that individual actions are limited in their effectiveness and that governments are not taking sufficient action to address these problems.”

• The flip side of that skepticism is that “communities are ready to take action but lack political and economic agency to effect the scale of change that is needed,” Green Resilience writes. “Governments must respond to this challenge with transformative policies that address the root causes of climate change and income insecurity while empowering communities to take self-directed action.”

The project produced a set of open-access resources for community groups interested in hosting their own local conversations, and is now on a search for funds to continue building local connections between income security, climate resilience, and a just transition off fossil fuels.

“The concomitant health and climate crises are exacerbating income insecurity,” Galvez said. “The economic recovery from the pandemic should focus on our transition to a low-carbon economy while helping reduce inequality.”

“Canada has committed to implement the UN Sustainable Development Goals,” Pate added. “Goal number one requires us to start by ending poverty. With millions of Canadians below the poverty line and millions more struggling to make ends meet, in order to be able to ensure a sustainable, healthy environment, we need a healthy economy that leaves nobody behind.”

Leadnow followed with a Twitter thread last week. “The ultra-wealthy contribute the most to the climate crisis but it is the rest of us who face the consequences,” the group stated. “In order to tackle climate change, we must also address income inequality. They’re both symptoms of a system based on endless extraction.”

Energy Mix Productions was one of the lead organizations behind the project, along with the Basic Income Canada Network.

‘Positively Electrifying’ Renewable Power Buy Will Be Quebec’s Biggest Ever