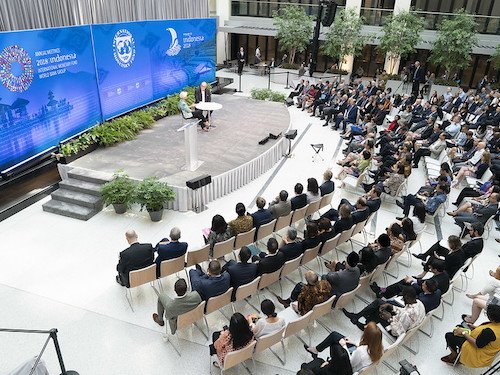 The International Monetary Fund (IMF) and the World Bank wrapped up their annual spring meeting in Washington, DC, last week without answering a request for an additional US$500 billion per year in climate finance to the Global South for the next 20 years.

“Support for the pandemic-triggered economic crisis is still needed, but a far greater crisis looms for the world’s poorest nations,” states an open letter to the IMF issued by 27 lawmakers from around the world who belong to the Global Alliance for a Green New Deal.

“The climate crisis, if left unchecked, will be far more devastating,” states their letter, repeating a plea first made by Barbados Prime Minister Mia Mottley at the COP 26 climate summit last November. Vulnerable countries are looking for an annual $500 billion through the existing IMF mechanism of special drawing rights (SDR), an artificial currency created by the IMF that can be used to repay international loans, or exchanged for other currencies.

The alliance also renewed calls for debt cancellation for developing countries, with United Kingdom MP Caroline Lucas urging the IMF to prove itself “fit for purpose” by meeting the “greatest challenge of the twenty-first century” and “cancelling unpayable debts, abolishing punitive surcharges, and making the billions in low-cost finance available that low- and middle-income nations need.”

“Climate adaptation continues to be grossly underfunded,” and pandemic recovery “will be much slower and longer” for least developed countries (LDCs) and small island developing states, said Bangladeshi minister Saber Chowdhury, adding that debt relief and expanding SDRs in the Global South “is desperately needed to avert climate catastrophe.”

Alliance members said they recognize the IMF’s newly-minted Resilience Sustainability Trust (RST), established on April 18 to support global climate adaptation, but remain “concerned about preliminary design features that are likely to render it a less effective instrument than is needed by many countries.”

The alliance urged the IMF to “provide debt-free financing, so it does not add to unsustainable debt burdens of developing countries” adding that “grant-based financing is critical for loss and damage related to climate change.” And “if additional loans are to be offered for mitigation, then maximum concessionality is critical”—meaning zero interest and lengthy repayment terms with extended grace periods,” the letter stated.

As adopted, the RST falls short of these demands: it’s based on loans, albeit with a 10.5-year grace period, and “with the most concessional financing terms provided to the poorest countries,” according to an IMF press release. With an initial funding target of $50 billion, the RST will also fall far short of the $500 billion per year requested by Mottley and the alliance.

Tirivangani Mutazu, a senior policy analyst for the African Forum and Network on Debt and Development, wrote that the RST’s “design features are incompatible with supporting a sustainable, equitable recovery and do not align with civil society organizations’ principles for fair and transparent SDRs channelling.”

Mottley thanked the IMF for the RST, calling it “the right step in the right direction” and “the only step thus far that acknowledges vulnerability”. But she pointed to injustices past and present—including the climate crisis—that have left the developing world and small island states like Barbados “taking on our balance sheets the actions of others.” The IMF, the World Bank, and development banks needed “to go further,” she said.