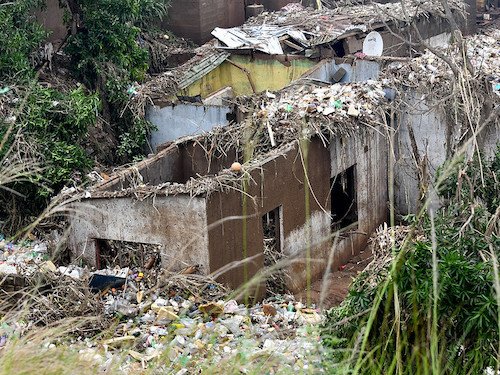 After South Africa’s deadliest storm on record killed 448 people and left another 63 missing, the country is vowing to get serious about climate adaptation—a pledge that must address the tragic nexus between climate casualties, dangerously inadequate housing, and a sky-high unemployment rate.

Over 4,000 homes were destroyed and thousands more seriously damaged, leaving 40,000 people without shelter, and many more without water or electricity as torrential rains caused floods and mudslides in South Africa’s KwaZulu-Natal province (KZN), reports Al Jazeera.

The port city of Durban—Africa’s second-largest container port after Port Said in Egypt—and its outlying areas composed of informal settlements—took the brunt of the flooding, after experiencing its heaviest rainfall in more than 60 years.

Some parts of KZN received more than 450 millimetres or 18 inches in 48 hours, said national weather service forecaster Dipuo Tawana, speaking with the Guardian as rain continued to hammer down over the weekend. This would amount to “nearly half of Durban’s annual rainfall of 1,009 millimetres,” added the UK news outlet.

With more than 500 schools and scores of hospitals were wiped out by the flooding, KZN Premier Sihle Zikalala said the loss and destruction made this natural disaster “one of the worst ever” in the province’s recorded history.

One flood victim in Umlazi, a major township on the southern edge of Durban, expressed a sense of angry déjà vu at the province’s lack of preparation for such calamities.

“Our possessions keep getting destroyed by continuous floods that should be addressed by authorities. No one ever comes back with a plan to solve it,” Mlungeli Mkokelwa, 53, told Reuters.

In a public address, South African President Cyril Ramaphosa acknowledged that the latest flooding of KZN marks the third such catastrophe since 2017, and pledged a strategic shift in how rebuilding would take place, reports the New York Times.

“We need to increase our investment in climate adaptation measures to better safeguard communities against the effects of climate change,” Ramaphosa said.

The president also recognized the connection between the harrowing death toll in KZN and South Africa’s housing crisis. The Times writes that a national unemployment rate of more than 35% puts well-built and permanent homes out of reach for millions of South Africans. Desperate for shelter, they “end up building tin shacks wherever they can find land,” which all too often means on riverbanks or on steep and increasingly water-logged slopes, both particularly dangerous places to live and raise families as the climate crisis accelerates.

Government efforts to address the lack of affordable housing (Cape Town says it has built more than three million free homes since apartheid ended) have been hampered by the fact that most of these homes “are built far from city centres, where land is cheaper, but jobs are scarce.” As a result, many South Africans have been forced to choose between having a better home and having a job, Edward Molopi, a researcher at the Socio-Economic Rights Institute of South Africa, told the Times. Citing Statistics South Africa, the Times reports that almost 12% of South Africans live in some equivalent of a tin shack on dangerously unstable ground.

Ramaphosa vowed to address this perilous reality, saying that rebuilding Durban “will also involve the construction of houses in suitably-located areas and measures to protect the residents of these areas from such adverse weather events in the future.”

Emergency relief funding of one billion rand (US$68 million) has been announced, and “some 340 social workers had been deployed to offer support to traumatized survivors, with many still missing children and other relatives,” reports Al Jazeera.

The trauma of the floods comes as KZN struggles to recover from the pandemic, as well as last year’s riots against unemployment and inequality that killed more than 350 people.