It’s A Bird! It’s A Helicopter! It’s a Flying Battery! as Zero-Emission Cargo Plane Takes Off 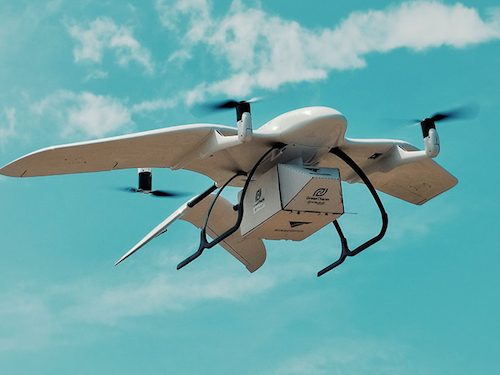 A diminutive, battery-powered cargo plane that looks like a cross between an Arctic tern and a helicopter is being built in Vermont, backed by the likes of Amazon and the United States military.

Burlington-based start-up Beta Technologies is pushing ahead with its Alia, which is “essentially a flying battery,” writes the New York Times. The paper describes the new design as “an aircraft with no need for jet fuel and therefore no carbon emissions, a plane that could take off and land without a runway and quietly hop from recharging station to recharging station, like a large drone.”

The Alia is not the first such machine to overcome the vexed physics behind such a goal: namely that batteries are heavy and planes need to be light. Slovenian-built Pipistrel Alpha Electro, a two-seater trainer whose single propeller “makes a sound like beating wings”, is already in the running, the Times says. Trouble is, the Electro’s power supply only lasts about an hour.

“Take off is fun,” Times contributor Ben Ryder Howe writes, recounting his experience flying in the Electro last year. But then you do start to worry about the landing.”

While Beta is not the only company pursuing electric vertical take-off and landing (eVTOL) systems, it is the only one focusing on the cargo trade, writes the Times. Its developers hope to win Federal Aviation Administration (FAA) approval in 2024.

As for whether the world is ready for “wingless hovercraft levitating over cities and hot-rodding through congested air corridors,” the FAA may take some convincing. The Times cites the case of a conventionally powered aircraft with VTOL capabilities that had its maiden flight in 2003—and has yet to be certified.

The Alia must drop down for regular recharging, as a single charge will take it 250 nautical miles or about 460 kilometres under ideal conditions. Beta’s charging stations will possess their own pragmatic elegance. Made out of shipping containers, the solar-powered stations will in some cases be outfitted with showers, bunks, and kitchenettes, with all cabinetry made from Vermont maple.

And some cargo heavyweights are banking on this vision: Amazon is investing heavily in Beta through its Climate Pledge Fund, while “UPS has already bought 10 Alias to be delivered in 2024 and signaled its intent to buy 140 more, which it plans to use as ‘micro-feeders’ for time-sensitive deliveries such as medicine,” Howe writes.

The American military has also signalled a strong interest, with the Air Force and Army together signing US$43 million in contracts with Beta. Last month, uniformed U.S. Air Force pilots flew an Alia for the first time, soaring above Lake Champlain, reports the Times.