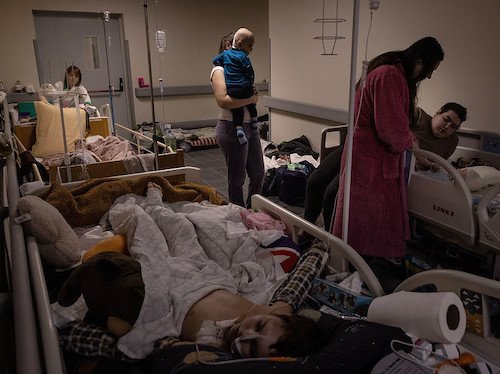 In the early hours of Russia’s Ukraine invasion, two American non-profits devised a plan to send solar microgrids to a Ukrainian hospital and emergency power equipment to a refugee camp, sparking an energy transition as the devastation of war caused power outages across the country.

Much of the power grid, now destroyed, will have to be rebuilt, and it can be built with renewables, Will Heegaard, operations manager for Footprint Project, told Microgrid Knowledge. His work in partnership with Paul Shmotolokha, a Ukrainian-American and CEO of New Use Energy, has set the stage for delivering electricity in new ways, Heegaard said.

“Ukraine obviously wants to use as little fuel as possible. This will spur more transformation toward renewables,” said Heegaard. But “it’s a long road and it won’t happen overnight.”

While the Footprint Project has responded to disastrous events like Hurricane Katrina, the work in Ukraine was “a whole new world” because of its international location within a war zone. For additional support, Heegard and Shmotolokha partnered with a coalition of non-profit, government, and corporate partners to coordinate funding, shipping, and other operations.

Solar generators can replace the noisy, polluting gas and diesel generators that usually fill in power gaps, and they are especially effective in areas like refugee camps, where the roar and smoke of conventional generators can affect the mental health of occupants. Medical facilities also benefit as lighting, communications, and lifesaving equipment are powered, writes Microgrid Knowledge. The solar generators are “highly tactical,” have no glass or frame, are lightweight and flat, and can be easily moved within a location.

“As the needs shift, we can shift along with them,” Heegard said. “A lot of that’s doable because we put the equipment on wheels. And I can tuck the 300-watt solar panels under my arm.”

Heegard and Shmotolokha want to turn their effort into something larger, aiming to train local people to assemble and maintain the solar microgrids.

“It’s exciting,” said Heegaard. “This pilot could offer a unique model of how to do disaster power. We send stuff initially and get partnerships worked out so we can build there and train a local work force to assemble and service equipment. We’re not just dropping off solar generators. This is much more a solution about how to train, use, build, and maintain the generators.”

Meanwhile, energy is figuring into anti-war efforts in Germany, where Vice Chancellor Robert Habeck called on citizens to cut their energy use to “annoy Putin.” In an interview with Funke news group, Habeck said that “every German could make a dent in their reliance on Russia by cutting their energy consumption by 10%,” reports BBC.