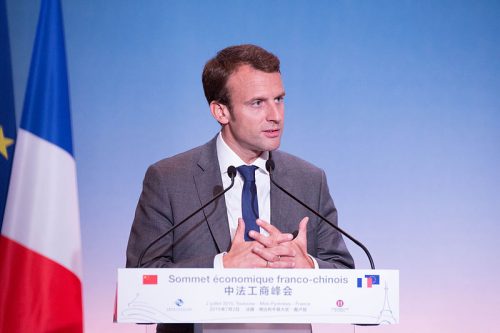 Climate and energy are on the ballot in France’s run-off election for president, as incumbent Emmanuel Macron and the far-right’s Marine Le Pen court the 7.7 million voters who supported far-left candidate Jean-Luc Mélenchon in the first round.

Speaking at a campaign rally in Mélenchon’s stronghold city Marseille, Macron “slammed” Le Pen as a “climate skeptic,” framed the election as a “civilizational choice,” and promised to transform France into a “‘great environmental nation’,” reports Politico.

Macron has vowed to make his next prime minister “directly responsible for ecological planning,” with plans to ramp up electric vehicles, fight for a European carbon tax, plant 140 million trees, close 50 open-air landfills by 2025, and ensure that CEO bonuses are based on their companies’ environmental record. In addition to pledging a ten-fold increase in solar and a two-fold increase in onshore wind, Macron also promised to build 50 offshore wind farms by 2030, and as many as 14 new nuclear reactors.

Meanwhile, Le Pen has cast herself as the “protector of the poor,” writes BNN Bloomberg. She is pledging to cut taxes on gasoline, home heating oil, natural gas, and electricity, while imposing a windfall tax on some of France’s largest energy companies. She is also calling for an exit from Europe’s electricity markets.

Her energy tax cuts will be financed in part by ending subsidies for wind and solar power. Responding to considerable popular animus against wind turbines as blights on the landscape that lower property values—and shrugging off the likelihood of legal challenges—Le Pen has vowed to halt construction on all onshore and offshore wind farms.

Her offensive against wind—and solar, to a lesser degree—is unlikely to end well, writes Bloomberg, given that the two renewable energy sources together represented 10% of France’s electricity output last year, a contribution that is projected to increase this year as the nuclear output from Électricité de France SA (EDF) “is set to drop to the lowest level since 1990 because of maintenance and technical issues at its aging fleet of nuclear reactors.”

Bloomberg adds that 15 years after it began the task, EDF “still hasn’t commissioned the sole new reactor under construction in the country.” The project budget has quadrupled during this period, standing now at €12.7 billion.

For his part, Macron plans to build “as many as 14 new large nuclear reactors, with the first pair coming online from 2035.” But even that relatively modest proposal brings “considerable challenges,” reports Bloomberg.

Le Pen’s energy platform could only further entrench the geopolitical vulnerability that has been made so apparent by Putin’s invasion of Ukraine, Nicolas Goldberg, an energy consultant at progressive think tank Terra Nova, told Bloomberg.

“If we can’t meet our electricity demand because of a moratorium on renewables or extravagant hypotheses on nuclear power, we’ll have to keep using fossil fuels,” Goldberg said, a move that would further hollow out the wallets of the poor while hammering the climate.

But “despite the obvious dangers of a Le Pen presidency,” Macron may struggle to win the climate-conscious vote, as many doubt his sincerity on the file, especially on the domestic front, writes The New Republic. “There are two Macrons,” said Nicolas Haeringer, associate director of Movement Partnerships for 350.org: the international climate leader, and the domestic politician who has all too often left climate priorities twisting in the wind.

Citing recent polls, Politico writes that 41% of Mélenchon’s supporters have said they aren’t voting in the run-off election, while 37% and 22% are throwing in their lot with Macron, and Le Pen, respectively.

Citing its own poll that shows Macron leading Le Pen 54% to 46%, Politico adds that the current president of France “needs those reluctant voters to show up.”