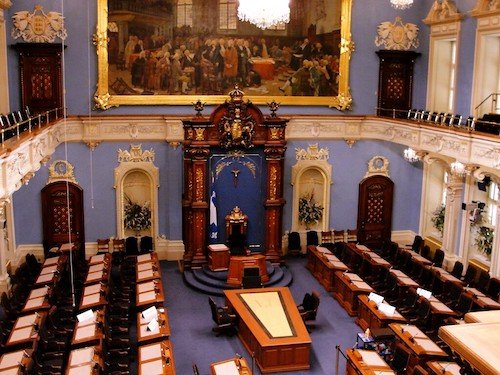 In what campaigners are calling a world first, Quebec’s National Assembly voted Tuesday afternoon to ban new oil and gas exploration and shut down existing drill sites within three years, even as the promoters behind the failed Énergie Saguenay liquefied natural gas (LNG) project try to revive it as a response to Russia’s invasion of Ukraine.

“By becoming the first state to ban oil and gas development on its territory, Quebec is paving the way for other states around the world and encouraging them to do the same,” Montreal-based Équiterre said in a release.

“However, it is important that the political will that made this law possible be translated into greenhouse gas reductions in the province, since Quebec and Canada have done too little to reduce their GHGs over the past 30 years.”

“The search for oil and gas is over, but we still have to deal with the legacy of these companies,” added Environnement Vert Plus spokesperson Pascal Bergeron. “Although the oil and gas industry did not flourish in Quebec, it left behind nearly 1,000 wells that will have to be repaired, plugged, decontaminated, and monitored in perpetuity. We now expect as much enthusiasm in the completion of these operations as in the adoption of Bill 21.”

Bill 21—whose numbering on Quebec’s legislative calendar leaves it open to confusion with an older, deeply controversial law on religious freedoms—will require fossil operators to shut down existing exploration wells within three years, or 12 months if the sites are at risk of leaking, Le Devoir reports. The bill follows Quebec’s announcement during last year’s COP 26 climate summit that it would join the Beyond Oil and Gas Alliance (BOGA), part of a list of a dozen jurisdictions that did not include Canada, the United States, or the United Kingdom.

Quebec’s legislation commits the government to cover 75% of the shutdown and remediation costs for the 62 sites across the province and compensate fossils for any exploration permits they received after October 2015. That made for a less complete win than climate and energy campaigners were aiming for and prompted the opposition Québec Solidaire to vote against the bill.

“The oil and gas companies have already siphoned millions of dollars from us, and the government wants to give them more?” QS co-spokesperson Manon Massé said yesterday. “In the midst of a climate crisis, that is unacceptable and irresponsible.”

In a series of tweets late Tuesday afternoon, Équiterre Climate Policy Analyst Émile Boisseau-Bouvier still declared the news a victory for transparency and well inspection and praised the parties in the Assembly for working across partisan lines to get the bill passed. “We want to see more of that on environment,” he said.

“It’s a shame to see more government compensation for oil and gas companies,” but legal research showed only a low probability of international legal challenges to the bill, he tweeted. “This win belongs to the thousands of citizens who have mobilized against fossil fuels for decades.”

The CAQ government’s generosity didn’t stop Quebec Energy Association President Éric Tétrault from vowing legal action. “By limiting its compensation to the cost of the permits, Quebec is inviting strong opposition from the industry, which would have liked to have been compensated for potential revenues from oil and gas extraction,” Le Devoir writes.

The bill passed just days after Bloomberg News reported that GNL Québec, the company behind the $14-billion Énergie Saguenay megaproject, was trying to resurrect its plan to ship LNG to Europe, with Vladimir Putin’s brutal war in Ukraine as its justification. Quebec rejected the proposal in July amid massive public opposition and concerns about an incomplete environmental assessment, with opponents warning that it would produce 1.8 billion tonnes of GHG emissions over 25 years and risk damage to wetlands, water pollution, and other impacts on traditional Innu territory.

The project “was rejected by both the federal and provincial authorities in recent months on environmental grounds,” Bloomberg writes. Quebec slammed the door again in early March, not long after the invasion of Ukraine began. But the company says it “has since been contacted by numerous stakeholders inside Canada and Europe requesting help to solve the continent’s energy security challenges,” Bloomberg says.

While the war has prompted discussions between Canada and several European nations about possible LNG exports, the continent is stepping up efforts to deploy renewable energy and energy efficiency and end its dependence on fossil fuels from any source. Last week, an analysis by the Institute for Energy Economics and Financial Analysis found the United States could meet its own commitments to increase short-term gas exports to Europe without building any new infrastructure.