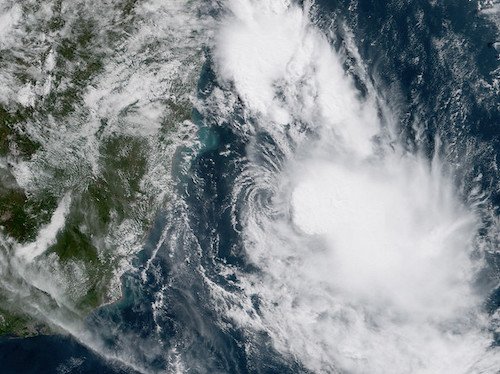 Just published in the journal Weather and Climate Dynamics, the study examined tropical Atlantic sea surface temperature figures from 1982 to 2020. It found that “an extremely active” cyclone season “was made 200% more likely” in 2020 by ocean warming brought about by human activity, Climate Analytics says in a release.

“While the attribution of individual tropical cyclone events remains difficult, there can be no doubt that climate change is creating more intense storms,” said lead author Peter Pfleiderer.

The main driver of tropical storms—wind patterns at different levels of the atmosphere or “seasonal atmospheric circulation”—varies annually and is difficult to simulate in climate models. So the team instead looked at increases in sea surface temperature (SST) “which are well understood, and can robustly be attributed to human-influenced climate change.”

But the results “could be conservative,” given that atmospheric circulation changes from global warming also affect tropical cyclone activity, Pfleiderer said.

“Tropical cyclones are among the most damaging extreme weather events and can devastate vulnerable countries,” Climate Analytics wrote. “In the past 20 years, some Caribbean Small Island Developing States have been hit by a major hurricane (an intense tropical cyclone that reaches Category Four or Five) eight times,” with consequent GDP losses averaging 3.7% per year. Dominica has been hardest hit, averaging yearly losses of 21.2%.

And researchers predict another “extremely active” Atlantic tropical cyclone season starting this August. If their forecasts prove correct, this will be the third extremely active season in the last decade.

“Given the projected increases in SSTs with increasing warming, our findings suggest that the probability of extreme seasons might further increase,” says Climate Analytics. “To minimize future risks, stringent emission reductions in line with achieving the goals of the Paris Agreement would be required.”