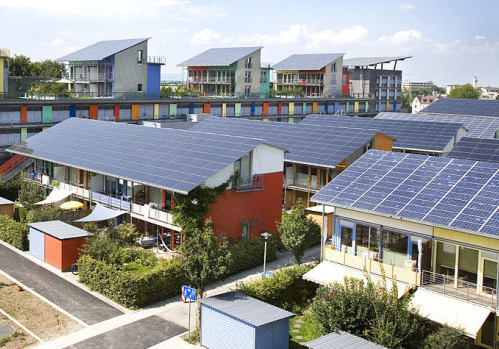 Germany’s energy security and climate policies leapt forward in a recently-announced Easter Package that outlines ambitious transition targets as the country struggles to unyoke itself from Russian oil.

In what it calls the “biggest energy policy reform in decades,” Germany’s coalition government proposes to lift the rollout of wind and solar power “to a completely new level” in a draft law that runs more than 500 pages, writes Clean Energy Wire.

“It aims to free up new land for green power production, speed up permit procedures, and massively increase wind and solar additions to achieve a nearly 100% renewable power supply by 2035.”

The announcement is especially important coming from an “industrial powerhouse” that has stalled on its clean energy transition over the past 10 years. The plan laid out in the Easter Package show that by 2030, Germany aims to more than double its onshore wind capacity to 115 gigawatts, and quadruple its offshore wind and solar generation to 30 and 215 gigawatts, respectively. It also requires power suppliers to reduce energy bills for consumers, and signals that the country will complete its coal phaseout by 2030, reports E3G.

Though the package is targeted for climate action, Russia’s ongoing invasion of Ukraine—and Germany’s dependence on Russia for cheap fuel—have compelled the government of Chancellor Olaf Scholz to proclaim renewable energies “a matter of national security,” adding a new motivation to rapidly scale up the sector.

The package shows there is “a great will to advance wind energy quickly,” said German Wind Energy President Hermann Albers. The renewable energy industry on the whole has responded positively to the package, but is demanding more action from a second anticipated Summer Package to further support the country’s clean energy targets, Clean Energy Wire reports.

While the cogs of Germany’s energy policies are turning, the EU is also looking to clean energy as an alternative to Russian oil and gas. Members have agreed “to reduce their net emissions by 55% from 1990 levels by 2030, a step towards net-zero emissions by 2050,” writes the Institute for Energy Economics and Financial Analysis.

“What we will do in the next couple of weeks is work towards what I call the Repower EU initiative, and as part of that we want to accelerate the energy transition. So in that context, we might revisit our targets,” European Commission Vice-President Frans Timmermans told media during a visit to Cairo.