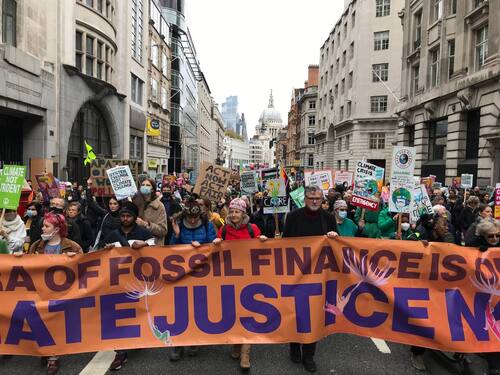 Two days after the latest, alarming science report from the Intergovernmental Panel on Climate Change, climate scientist Peter Kalmus and three colleagues were arrested for locking themselves to the entrance to the JPMorgan Chase building in downtown Los Angeles. In a post for The Guardian, Kalmus traces how the slow pace of climate action got him out of the lab and into the streets, and why he feels morally compelled to raise the alarm.

I’m a climate scientist and a desperate father. How can I plead any harder? What will it take? What can my colleagues and I do to stop this catastrophe unfolding now all around us with such excruciating clarity?

Last Wednesday, I was arrested for locking myself to an entrance to the JPMorgan Chase building in downtown Los Angeles with colleagues and supporters. Our action in L.A. is part of an international campaign organized by a loosely-knit group of concerned scientists called Scientist Rebellion, involving more than 1,200 scientists in 26 countries and supported by local climate groups. Our day of action follows the IPCC Working Group 3 report released the previous Monday, which details the harrowing gap between where society is heading and where we need to go. Our movement is growing fast.

We chose JPMorgan Chase because out of all the investment banks in the world, JPMorgan Chase funds the most new fossil fuel projects. As the new IPCC report explains, emissions from current and planned fossil energy infrastructure are already more than twice the amount that would push the planet over 1.5°C of global heating, a level of heating that will bring much more intense heat, fire, storms, flooding, and drought than the present 1.2°C.

Even limiting heating to below 2°C, a level of heating that in my opinion could threaten civilization as we know it, would require emissions to peak before 2025. As UN Secretary-General António Guterres said in the press conference on Monday: “Investing in new fossil fuel infrastructure is moral and economic madness.” And yet, this is precisely what President Biden, most other world leaders, and major banks are doing. It’s no exaggeration to say that Chase and other banks are contributing to murder and neocide through their fossil fuel finance.

Earth breakdown is much worse than most people realize. The science indicates that as fossil fuels continue to heat our planet, everything we love is at risk. For me, one of the most horrific aspects of all this is the juxtaposition of present-day and near-future climate disasters with the “business as usual” occurring all around me. It’s so surreal that I often find myself reviewing the science to make sure it’s really happening, a sort of scientific nightmare arm-pinch. Yes, it’s really happening.

If everyone could see what I see coming, society would switch into climate emergency mode and end fossil fuels in just a few years.

I hate being the Cassandra. I’d rather just be with my family and do science. But I feel morally compelled to sound the alarm. By the time I switched from astrophysics into Earth science in 2012, I’d realized that facts alone were not persuading world leaders to take action. So I explored other ways to create social change, all the while becoming increasingly concerned.

I joined Citizens’ Climate Lobby. I reduced my own emissions by 90%, and wrote a book about how this turned out to be satisfying, fun, and connecting. I gave up flying, started a website to help encourage others, and organized colleagues to pressure the American Geophysical Union to reduce academic flying.

I helped organize FridaysForFuture in the United States. I co-founded a popular climate app and started the first ad agency for the Earth.

I spoke at climate rallies, city council meetings, and local libraries and churches. I wrote article after article, open letter after open letter. I gave hundreds of interviews, always with authenticity, solid facts, and an openness to showing vulnerability. I’ve encouraged and supported countless climate activists and young people behind the scenes. And this was all on my personal time and at no small risk to my scientific career.

Nothing has worked. It’s now the eleventh hour and I feel terrified for my kids, and terrified for humanity. I feel deep grief over the loss of forests and corals and diminishing biodiversity. But I’ll keep fighting as hard as I can for this Earth, no matter how bad it gets, because it can always get worse. And it will continue to get worse until we end the fossil fuel industry and the exponential quest for ever more profit at the expense of everything else. There is no way to fool physics.

Martin Luther King Jr. said, “He who accepts evil without protesting against it is really cooperating with it.” Out of necessity, and after exhaustive efforts, I’ve joined the ranks of those who selflessly risk their freedom and put their bodies on the line for the Earth, despite ridicule from the ignorant and punishment from a colonizing legal system designed to protect the planet-killing interests of the rich. It’s time we all join them. The feeling of solidarity is a wonderful balm.

As for the climate scientists? We’ve been trying to tell you this whole time.