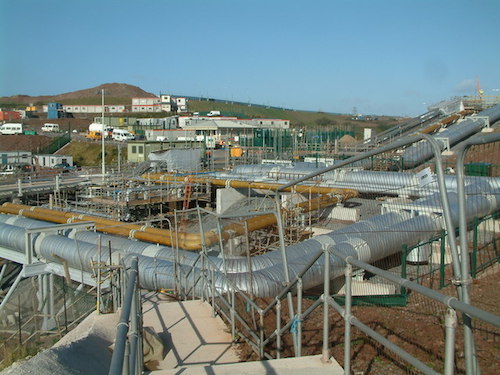 There’s no need for new export terminals in the United States to help Europe end its dependence on natural gas from Russia—the U.S. fossil industry’s spin notwithstanding, according to a new analysis by the Institute for Energy Economics and Financial Analysis.

“The White House and European leaders announced plans in late March to boost U.S gas shipments to Europe by at least 15 billion cubic metres this year,” IEEFA says in a release. But while the fossil lobby is leaning in to the European fossil energy crisis as reason to build more liquefied natural gas (LNG) export capacity, the analysis found the U.S. LNG industry is on track to exceed the target, without the construction of any new LNG plants.”

Already this year, “a combination of increased output from U.S. plants and flexible contracts has allowed much more U.S. LNG to flow to Europe,” said report author and IEEFA energy finance analyst Clark Williams-Derry. The report, based on data from IHS Markit, shows U.S. LNG producers with far more gas available to be sold or redirected than the continent is actually looking for.

“Counting contracted LNG with flexible destinations, spot sale volumes, and pre-existing commitments with European buyers, almost 55 MMt of U.S. LNG (75 bcm of gas) could be available to Europe this year,” states the report [pdf]. “Destination flexibility in current contracts would allow for a significant increase in U.S. LNG shipments to Europe from their 2021 level of 22.2 MMt (30.4 bcm of gas), without any new long-term sales contracts,” and “European buyers also can negotiate with Asian contract holders to secure additional imports of U.S. LNG.”

“If shipment patterns during the first quarter of 2022 continue, the U.S. LNG industry will far exceed the short-term target, set by officials from the EU and the White House, of boosting U.S. LNG shipments to the EU by 15 billion cubic meters this year,” the report adds. “However, Europe’s increasing appetite for U.S. LNG comes at a cost—for Europe, for the U.S., and for the world.” That’s because “LNG imports are inherently more expensive for the EU than the Russian gas they replace. At the same time, U.S. consumers are now paying much more for their natural gas, because rising LNG exports have contributed to supply shortfalls and tight gas markets in the U.S.”

All of which means that “building new LNG infrastructure in the U.S. could be a long-term financial mistake,” Williams-Derry said in the release. “The U.S. is on track to meet European LNG supply goals using the plants it has, and new plants could face long-term challenges from fickle Asian demand and Europe’s climate commitments.”

In early March, within a couple of weeks of Vladimir Putin’s invasion of Ukraine, the European Commission committed to reducing its dependence on Russian gas by 65% this year and phasing it out “well before 2030. “We simply cannot rely on a supplier who explicitly threatens us,” EC President Ursula von der Leyen said at the time. “We need to act now to mitigate the impact of rising energy prices, diversify our gas supply for next winter, and accelerate the clean energy transition. The quicker we switch to renewables and hydrogen, combined with more energy efficiency, the quicker we will be truly independent and master our energy system.”

In a media briefing that week, Global Energy Monitor Executive Director Ted Nace said North American gas companies had been having trouble getting investors interested in the new LNG terminals they wanted to build. “There are tremendous pressures now to use the crisis to change the equation for these terminals,” he said, but “the situation has not fundamentally changed,” with three big barriers to the industry’s expansion dreams: climate regulation, faltering demand for new gas supplies, and competition from increasingly affordable, reliable renewable energy and energy storage.

Now, Germany is saying it may be able to end all its Russian oil imports this year, Reuters reports. While it will take longer for the country to free itself from Russian gas, Chancellor Olaf Scholz’s time frame is nowhere near what U.S. fossils would need to justify new export capacity.

“Germany wants to cut the share of Russian gas to 24% by this summer,” Reuters writes, from a high of 40% in the first three months of this year. “It could take until the summer of 2024 for Europe’s largest economy to end its reliance on Russian gas.”