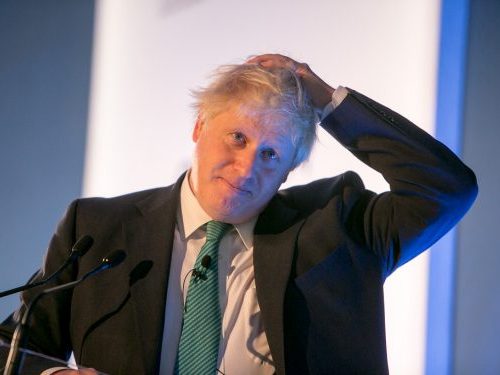 Plans to build a up to eight giant new nuclear reactors plus a raft of small modular reactors as part of the new energy strategy announced yesterday by the British government were met with outrage by environmentalists and scientists.

The government also decided to back an already booming offshore wind sector, ramp up solar power, and invest in hydrogen production. But it failed to put money into energy efficiency and bowed to pressure from a small number of elderly Conservatives not to expand onshore wind—the cheapest form of renewable energy in the United Kingdom.

Despite the fact that two previous UK prime ministers, Margaret Thatcher and Tony Blair, both planned similar grandiose nuclear schemes which turned to dust, current PM Boris Johnson claimed that with the nuclear boom 95% of the country’s energy would be low-carbon by 2030. Since it currently takes 15 years or more to plan and build a new nuclear station, this seems as wildly optimistic as many of Johnson’s past pronouncements.

It also flies in the face of the Intergovernmental Panel on Climate Change report published Monday which recommended energy efficiency first, wind and solar as the quickest and least expensive options of reaching net-zero, and cautioned against both the cost and delivery times for new nuclear. In other words nuclear cannot be built in time and on scale to avert the worst effects of climate change.

Attracting even more adverse comment were the UK government’s plans to expand oil and gas exploration in the North Sea, which it claimed would promote energy security and reduce reliance on Russian gas. The whole package is being sold to the public on the basis that it makes the UK energy system independent while delivering action on climate. Yet 50% of the uranium that would power the UK’s reactors, should they ever be built, would have to come from Russia and its client states in Central Asia.

For climate and energy advocates, the bright spot was the plan to expand offshore wind to deliver 50% of the UK’s electricity by 2050. This is an already booming industry that currently takes four years from planning an offshore wind farm to it being in production. The government wants to cut this to one.

Solar received a similar boost, with the government planning to increase current installations fivefold. If both these targets are met, they would alone produce more electricity than the country currently uses.

At present, the UK has one nuclear power station under construction, the £23-billion Hinkley Point C in Somerset, and a number of existing reactors, all but one of which will close before 2030. The twin reactors of the new station are being built by utility giant Électricité de France (EDF). The plant is already years late and over budget and not expected to be completed until 2026—and a further delay of as yet unspecified length has just been announced.

The next planned station of the same size and design is planned at Sizewell in Suffolk, where there is considerable opposition: in addition to being thought the wrong technology to fight climate change, the site is on a coast vulnerable to sea level rise and close to an internationally important nature reserve.

“Demand reduction does not offer Mr. Johnson the same photo opportunities as do shiny new nuclear plants sprawling over acres of valued countryside,” said Together Against Sizewell C spokesperson Chris Wilson. But “if he is serious about zero carbon by 2050, he would do well to switch investment into electricity storage technology development, introduce targets for onshore wind, support energy efficiency, and fund property insulation retrofitting policies—faster, cheaper, more reliable options which avoid the burden we pass to future generations in the shape of nuclear waste for which there is no universally agreed and implementable solution.”

Nuclear Consulting Group Chair Dr. Paul Dorfman, who advises both French and UK governments on nuclear matters added that “Boris’ plan for a toxic nuclear garden can only be financed via massive public subsidy, putting the hard-pressed UK electricity consumer and taxpayer on the hook for inevitable cost over runs and price hikes.

The plan “won’t do a thing for the current energy crisis and will be too late to help with the climate crisis, given it’s taking up to 15 years to build just one nuclear plant,” Dorfman said. “And the push for SMRs (small modular nuclear reactors) may do no better, as they’re still ‘in development‘, with perhaps one built by the mid-2030s.”

He added that “the Rolls Royce design planned for the UK SMRs is absolutely not small, rather one-third the size of a very large reactor.”

Philip Johnstone, a colleague of Dorfman’s at the Sussex University Business School, has studied the relationship between nuclear weapons states and their governments’ continuing adherence to nuclear power for generating electricity.

“One has to ask what kind of country disregards the fastest and most effective means of alleviating high energy costs and gas dependence for a far more expensive option that can do nothing for over a decade and will make things economically harder for its citizens,” he said. “One that is arguably a failing democracy, and one that is clearly committed to nuclear for reasons beyond energy policy.”

To underline his point, Germany wants to fight the climate crisis and its heavy dependence on Russian fossil fuel imports by speeding up the rollout of renewables, with a massive overhaul of key energy legislation. In the “biggest energy policy reform in decades,” the 100-day-old coalition of Social Democrats (SPD), Greens, and Free Democrats (FDP) proposes to lift the rollout of wind and solar power “to a completely new level” in a draft law amounting to more than 500 pages. It aims to free up new land for green power production, speed up permit procedures, and increase wind and solar additions to achieve a nearly 100% renewable power supply by 2035.

Greenpeace UK condemned “Boris’s energy strategy” and said it would not work, particularly his plan to build “one nuclear plant a year”, saying they facilities never be ready in time to make a difference to the climate crisis. “The urgency of the climate crisis needed an urgent response,” Greenpeace said. “Sadly, the government’s energy security plan didn’t deliver.”