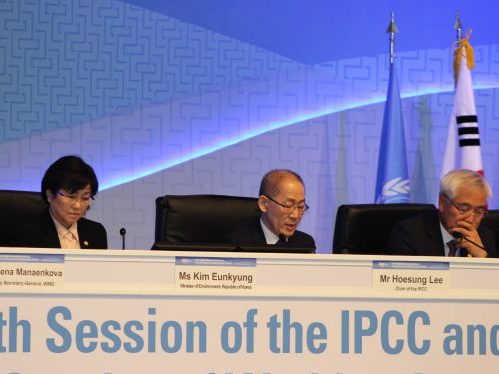 The fossil fuel industry and its influence over policy was the major elephant in the room looming over the release of the third and final report, out earlier this week, from the Intergovernmental Panel on Climate Change (IPCC), the world’s leading climate authority. The major source of contention: how do you talk about mitigating climate change without confronting the fossil fuel industry?

The first two reports, both released over the last year, highlighted the physical science on climate effects and countries’ vulnerability to further warming. But this third report deals more with the potential solutions, which have been a focal point of controversy in recent years for both the fossil fuel industry and the governments of oil-rich nations, climate journalist Amy Westervelt reports for the Guardian.

Social scientists were successful in pushing for more of their research to be included in the IPCC’s reports, with chapters that touch on everything from debunking claims that less developed countries need fossil fuels to help tackle poverty to a rundown of efforts to block climate policy. The report made one thing abundantly clear: the technologies and policies necessary to adequately address climate change exist, and the only real obstacles are politics and fossil fuel interests.

The role of the fossil fuel industry is highlighted throughout the report’s nearly 3,000 pages, but researchers note it was mysteriously absent from the Summary for Policymakers—traditionally the first part of the report that’s released and often attracts the most media attention. An earlier draft of the summary leaked to the Guardian, however, described the fossil fuel industry and others invested in a high-carbon economy as “vested interests” that have actively worked against climate policy, noting: “Factors limiting ambitious transformation include structural barriers, an incremental rather than systemic approach, lack of coordination, inertia, lock-in to infrastructure and assets, and lock-in as a consequence of vested interests, regulatory inertia, and lack of technological capabilities and human resources.”

Brulle, whose research is cited multiple times in the report, was dismayed to see the cut. “The scientists clearly did their job and provided ample material on climate obstruction activities in the report,” he told Westervelt. “The political process of creating the Summary for Policymakers ended up editing all of this information out.”

Unlike the research-heavy chapters, which are controlled entirely by the scientists who research and write them, the Summary for Policymakers must be approved by government representatives from 195 countries around the world; the approval process for this year’s mitigation report was the longest and most contentious in the history of the IPCC. According to leaked reports, representatives from Saudi Arabia in particular argued for multiple references to carbon capture and storage and the watering down of language on shutting down fossil fuel production.

Oil company representatives were also included in this process as both authors and editors of the report, which has been the case since the IPCC began. For the latest report, a senior staffer for Saudi Aramco—Saudi Arabia’s state-owned oil and gas company—was one of the two coordinating lead authors, a position of considerable influence, for the chapter on cross-sector perspectives. A longtime Chevron staffer was also the review editor for the chapter on energy systems.

“Obviously, none of this was secret,” noted Julia Steinberger, professor of ecological economics at the University of Lausanne, and a lead author of the section on mitigation pathways compatible with long-term goals. While authors and contributors are required to disclose their affiliations, Steinberger said contributions from oil industry insiders represent an untenable conflict of interest.

“Just because a person fills out forms does not mean they don’t have other interests at heart that are not reflective of the science and the public interest, but more reflective of their employer.”

Despite the influence of oil companies and oil-rich nations, the report does still highlight the fossil fuel industry’s influence on policy-making, and eviscerates some of the industry’s favorite myths. In the new chapter on “Demand, Services and Social Aspects of Mitigation”, for example, researchers challenged the long-held belief that fossil fuel consumption is entirely driven by demand.

“What we were able to demonstrate was actually the contrary: there is no sustainable development or development, full stop, possible without climate mitigation,” said Steinberger, who was a contributing author on the chapter.

“Unless you mitigate climate, the impacts are going to catch you every step of the way and just make people’s lives increasingly hard and miserable, especially in the global south.”

The connection between social justice and climate mitigation is one that runs throughout the report. “People are beginning to realize how serious the climate crisis is, and that the ways to meet the challenges of the climate crisis—moving to low-carbon energy, looking after the environment, shifting transport—tend to also improve energy security, justice, social concerns. There are a lot of win-wins and co-benefits,” said Catherine Mitchell, professor of energy policy at Exeter University, and one of the two coordinating lead authors on the chapter focused on policy.

Social scientists hoping to make further inroads into not only the IPCC process, but policy-making more broadly, have a chicken-and-egg problem, according to Dana Fisher, director of the program for society and the environment at the University of Maryland and a contributing author to chapter 13. Fisher’s research focuses on the impact that activism has had on climate policy-making.

“We have insufficient funding to support the sort of large-scale research that enables you to have high confidence in your findings,” she said, which limits the amount of social science research that can be used in the report.

Less than 1% of research funding on climate from 1990 to 2018 went toward social sciences, including political science, sociology, and economics. That’s despite the fact that even physical scientists agree that inaction on climate will probably not be solved by more scientific evidence.

“Back in the 80s, we believed in the information deficit model of social change, and that if we could only get the information to policy-makers they would do the right thing,” said atmospheric scientist Ken Caldeira, senior scientist for Bill Gates’s Breakthrough Energy. “And now we see that really it’s not about information deficit, it’s about power relations, and people wanting to keep economic and political power. And so just telling people some more climate science isn’t going to help anything.”

That’s not to say there’s no further need for atmospheric models, or a better understanding of various aspects of climate science. But what this report makes abundantly clear is that acting on climate is not being restricted by a lack of scientific knowledge or technological options, but by entrenched power structures and an absence of political will. To effectively address that, and act in time to avoid the worst impacts of warming, social scientists agree: we’re going to need more than climate models.