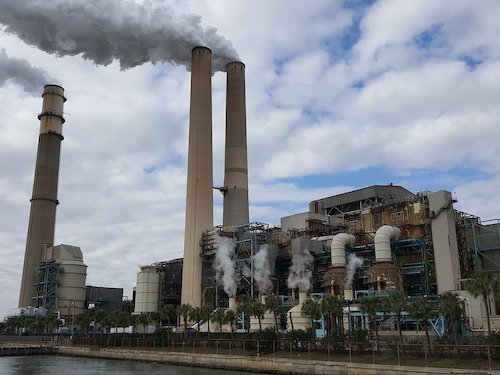 The newly-released Intergovernmental Panel on Climate Change (IPCC) summary of emissions trends and drivers cites a harrowing statistic: cumulative net emissions in the past decade were about equal to the remaining carbon budget for limiting warming to 1.5°C, considered the maximum possible without severe damage to the environment and humanity.

Put another way, we have only one decade of emissions at past rates before we overshoot the target.

Critically, the IPCC notes that emissions over the next decade from fossil fuel infrastructure currently in place are enough to exceed the 1.5°C target. To overcome the inertia created by “carbon lock-in,” planned new fossil capacity needs to be cancelled, and existing installations must be decommissioned or cut back, the IPCC finds.

Average annual emissions growth from 2010 to 2019 was lower than the previous decade: 1.3% per year, down from 2.1%. Still, global net anthropogenic emissions over the past decade were “higher than at any previous time in human history.”

The IPCC provides this breakdown of global emissions by sector as of 2019:

When indirect emissions are added, industry and buildings emissions rise to 34% and 17%, respectively. Transport and industry are the fastest growing sectors.

Drivers for emissions growth include rising demand for materials and manufactured goods, increasing floor space per capita, building energy services, travel distances, and vehicle size and weight. Overall, rising GDP per capita and population growth continued to be the strongest drivers of emissions growth, as they have been since 1990.

However, the IPCC was careful not to hand poorer nations the blame for rising carbon pollution. Although emissions grew 26% from 2010 to 2019 in the low-income regions of Africa, Asia, Pacific, Latin America, and the Caribbean, those regions started at a much lower baseline. Average per capita emissions in the developing world in 2019 “remained less than half that of developed countries,” and the developing world has contributed 28% to cumulative emissions since 1850, compared to 57% from developed countries.

The per capita differences are much more stark. “The global wealthiest 10% contribute about 36 to 45% of global GHG emissions,” up to 4½ times their share,” the IPCC says. The majority of wealthy high emitters are concentrated in high-income regions, with about a third of them found in “emerging economies”.

Improved living conditions for the global poor are not seen as a threat to climate. “Providing access to modern energy services would increase global GHG emissions by at most a few percent,” the IPCC finds, and “decent living standards for all” could be achieved at a level of energy consumption well below the current average.

Progress in the transition to a green energy future is unevenly distributed, as well. About 24 countries have reduced their emissions for more than the past decade (elsewhere in the 2,913-page report, the number is 18), although not enough to meet the 1.5°C target, and not enough in total to take a significant bite out of global emissions.

In places where a rapid energy transition is under way, drivers include “technology transfer and cooperation, intentional policy and financial support, and harnessing synergies among technologies within a sustainable energy system.”

The IPCC says cost, performance, and adoption of low-carbon technologies have exceeded past projections. “The rapid deployment and cost decrease of modular technologies like solar, wind, and batteries have occurred much faster than anticipated by experts and modelled in previous mitigation scenarios.”

Policy instruments needed to drive adoption of low-carbon technologies include research, training, demand stimulus through carbon pricing and subsidies, and measures to promote sharing of knowledge and technologies.