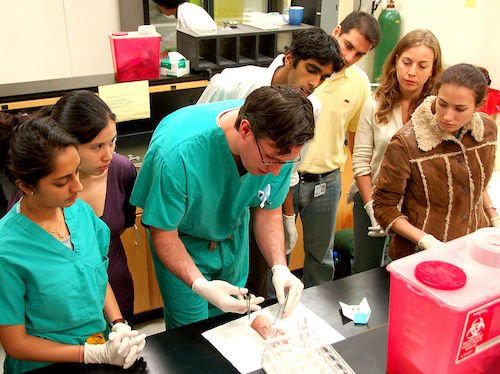 Responding to pressure from its students, Emory Medical School in Atlanta has formally integrated learning about the human health impacts of the climate crisis into its curriculum.

Now in their fourth year at Emory, medical students Ben Rabin and Emaline Laney first noticed how seldom the climate crisis showed up in their lectures in year one of the program, writes Grist.

Rabin and Laney began their campaign for change by working through the first- and second-year medical curriculum to identify places where it would make sense to talk about climate.

Such opportunities were easy to find, notes Grist, given that climate health impacts are everywhere—from poor birth outcomes linked to heat stress, to air pollution driving lung and heart disease, to spikes in anxiety and depression in the face of increasingly common extreme weather events.

Emory’s curriculum upgrade comes as medical schools across the United States increasingly embrace the imperative to teach their students about the climate crisis, following the lead of the country’s schools of public health.

A pioneer in the field, Johns Hopkins University established its Environmental Health Institute in 2007 and others, like Harvard, Yale, and the University of Washington, have since followed suit.

Emory’s move comes five years after Columbia University launched the Global Consortium on Climate and Health Education. Focused on developing best practices for teaching about the intersections between climate and human health, the consortium now “counts 47 medical schools in the United States as members, among more than 240 schools of medicine, nursing, public health, dentistry, and veterinary medicine worldwide.”

And it comes three years after the American Medical Association formally endorsed educating on the connection between climate change and health at all stages of medical students’ learning.

Dr. Becca Philipsborn credited the determination of students like Rabin and Laney in insisting that their school begin to teach the impacts of climate on health.

Previous progress on the matter was “a little slow and ad hoc,” she said. “Now, there is momentum that seems to reflect a shared recognition that climate change matters for the health of our patients, for clinical care delivery, now.”

Student pressure has also been critical in pushing other medical schools across the country to address the climate crisis.

Recognizing the role of social determinants in shaping human and public health outcomes—the climate crisis being one such a determinant—Dr. Georges Benjamin, executive director of the American Public Health Association, acknowledged that physicians must be trained as early in their careers as possible “to be a little more holistic in their approach.”

Given the influential role they play in their communities as trusted experts, physicians who are well versed on the connections between human health and the climate crisis can also play a part in inspiring climate action.

Second-year Emory med student Irene Liu told Grist she hoped that listening to a family doctor discuss the health impacts of the climate crisis would motivate people, even if they might otherwise hesitate to act.

“I think that raising awareness to our patients about how air pollution and warming and wildfires are affecting your health and your children will have rippling effects.”